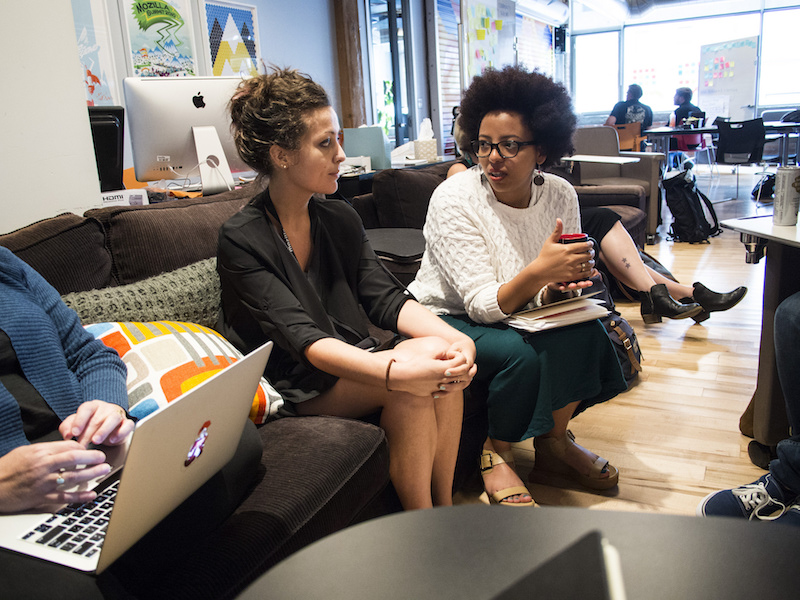 The process of scientific research was once an isolated endeavor. Researchers often conducted experiments behind closed doors, sharing the results of their work in academic journals only after a discovery or breakthrough had been made. That closed off approach to scientific inquiry and experimentation is still in place today, but it's increasingly being challenged by a number of researchers, librarians, developers, and people from other disciplines who have a strong desire to contribute to scientific advancement. It's called the open science movement, and one of the organizations facilitating the process through fellowships, trainings, and grants is the Mozilla Science Lab. Stephanie Wright, a former librarian, who is now the program lead at the Lab, says "the biggest benefit to open science is that you're opening knowledge and resources to people who can build on what you've already started."

The Science Lab, which is run by the Mozilla Foundation and funded by the Alfred P. Sloan Foundation, the Helmsley Charitable Trust, and Siegel Family Endowment, focuses on improving access to scholarly works and connecting researchers with the public. It also offers a platform where scholars can share their current projects with the public, so people — including those without a background in science — can play a direct role in moving research forward by assisting with documentation, coding, design, testing, and other tasks.

Although the open science movement has gained in popularity over the years, there are still challenges that it needs to overcome, as Rose Eveleth noted in a piece in The Atlantic, in 2014: "Making something open isn't a simple checkbox or button — it takes work, money, and time." She concluded the piece by writing, "In some ways, the struggle here is to be expected, because what we're really talking about is changing a culture. Science has not, traditionally, been an open discipline. Culture change is hard, and it takes work — work that is often done by the younger generation."

A significant piece of Mozilla Science Lab's work centers on just that — providing support and resources for young researchers to work more openly. We talked to Wright about the organization's role in advancing the open science movement since its launch in June 2013.

Ambika Kandasamy, Shareable: Can you tell me a bit about what drew you to the Science Lab?

Stephanie Wright, Mozilla Science Lab: I actually come from the library world. I've been a librarian for 20 years, and I started at the University of Washington — I started out there as a science librarian. I grew into a position of doing assessment and evaluation of libraries.

From there, I became the program lead for their research data services program, and I started the program there in 2010. I did some work around open data because of that, and got involved and interested in open science. I worked with our eScience Institute at the University of Washington. That's how I met Kaitlin Thaney, who is the former head of the Science Lab and started the Science Lab. She came knocking on my door and she said, "We'd really like you to come lead our open data training program that Helmsley [Charitable Trust] is funding," so I left academia for Mozilla. 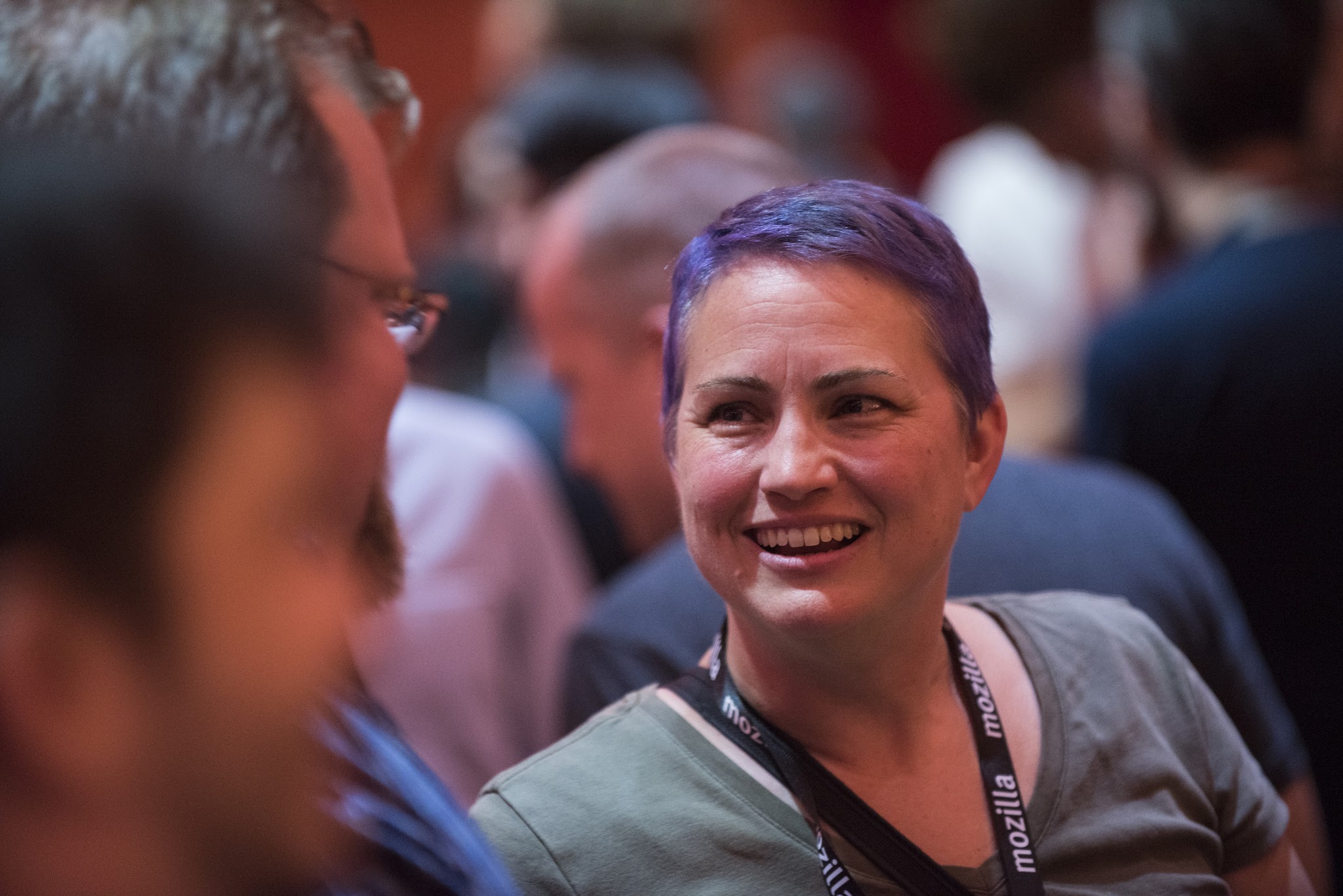 I take it that you're enjoying it so far?

Oh my gosh, I love it. You know, I tell people all the time that when I worked in libraries, we tend to be pretty open in libraries, so I thought I knew what open was and I thought I had a pretty global view of the world, because I worked with institutions all over the world. I had no idea until I moved to Mozilla what global meant and what open meant.

That's great. So I'm curious: What prompted the Mozilla Foundation to launch the Science Lab?

If you think back to the birth of the internet — the birth of the internet actually was a science project. It's what brought the internet about, so it is actually a very natural program for Mozilla to fund. By promoting open science and helping researchers share their work more openly, we're advancing knowledge. The Internet is a great tool for that. We encourage researchers to open their data, to work more collaboratively, and all of these are things that relate back to our Internet Health Report. Last year, we released the first version of our Internet Health Report, and it really digs into what we see as five core issues into making the internet healthy and accessible for everyone into the future.

Could you tell me specifically about the kinds of projects that the Lab supports and develops?

So our flagship program that a lot of people are aware of — or most aware of at least from the Science Lab — are our fellowships. We started out with four fellows per year in 2016. We just graduated our second cohort this past June, and we started our new cohort, in Toronto. The fellowships are a program to really to develop new leaders in open science. It's a sustainable way of building community and keeping the open science support going beyond just the three people in the Science Lab, so we develop leadership through our fellowship program.

We also run an Open Leadership Mentoring program, where we mentor people for 12 to 14 weeks on some sort of open project. We kick off those Open Leadership Mentoring Programs with something we call Working Open Workshops, where we spend two days with a cohort of people, training them how to use Github, how to develop good READMEs for open projects, how to identify community and audience, how to develop a roadmap for the project, how to communicate their science, that sort of thing. 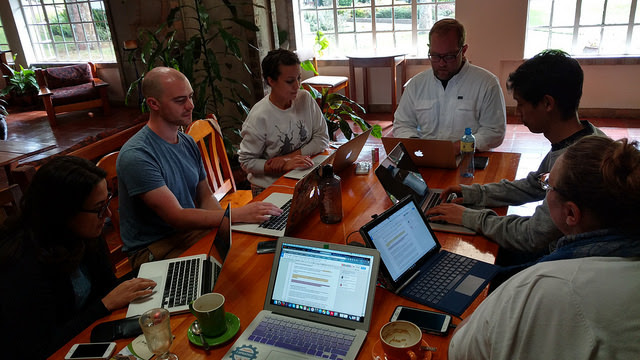 Fellows working on final projects in Nairobi, Kenya, in 2016. Photo courtesy of the Science Lab.

We also run Friendly Intro to GitHub trainings that are separate from the Working Open Workshops, because GitHub can be challenging for folks and it really is a good tool for folks openly collaborating on a project. It can be used for project management really well. We developed an Open Data Training Program. Right now, it consists of some primers, exercises, and an instructional guide.

We support study groups all over the world. Study groups are informal meetups that are hosted by volunteers all over the world. Some are on specific topics. Some focus on our programming, some focus on Biology, some are just open science and how to work openly in general. We have Community Calls, which is a real low-barrier entry for anyone who is just interested in open science and wants to listen in for an hour as we talk to people who are doing really cool open science projects and talk about how they can get involved.

What would you say are some of the key challenges when it comes to information access and sharing among the scientific community?

I think a lot of it comes down to incentives. The current tenure and promotion process really isn't built towards incentivizing researchers to build open practices into their work. It also takes time and effort to do things more openly. It takes more effort at the beginning, even though it takes less effort on the back end but to have that initial push of effort at the beginning requires some motivation.

Getting back to the tenure and promotion process — not only does it not incentivize people to work openly, it also creates barriers and people are afraid that they'll get scooped if they share stuff too early. Getting scooped has been blown out to be a bigger problem than it actually is — not to say it doesn't happen, I know it does. But I think it's actually a good reason to work openly because if you put your research out there and start creating that provenance, if someone else does copy it or scoop you, you're able to point back and say, "Look, I put this out there." So it actually gives you more support for a claim of getting scooped than hiding your material.

Broadly speaking, what are some advantages of opening up the scientific research process in this way?

If you talk about all the conversations about open access to publications right now, and how research that people are paying for — the taxpayers are paying for — they can't access it because it's behind a subscription that costs hundreds to thousands of dollars or forty bucks plus for a single article. So you're really limiting who has access to particular knowledge. There are a ton of stories out there — open data success stories where researchers have released their data and someone completely unexpected has made a discovery off that data. That's the biggest benefit to open science.

As we go forward and there are new diseases around the world, we save lives by opening stuff up and really maximizing who can contribute their expertise — and expertise can come from places you don't expect.

This Q&A has been edited for length and clarity. This is the first piece in a new Shareable series on the open science movement. Header image of Mozilla Foundation program manager Aurelia Moser and fellow Berhan Taye in Toronto, Canada, courtesy of Mozilla Science Lab.