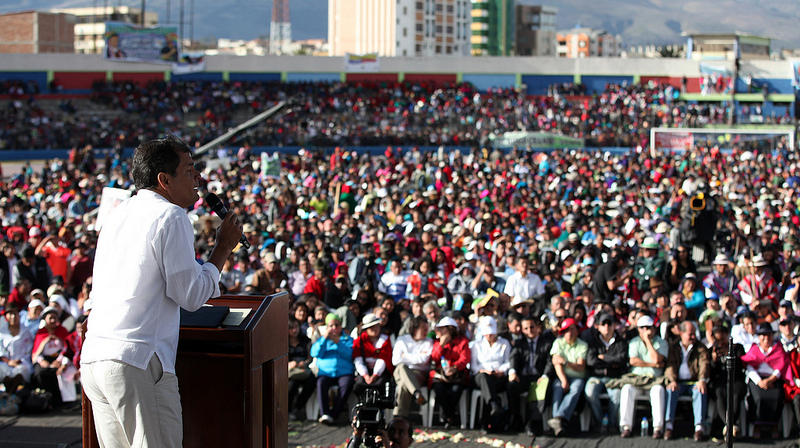 This year Rafael Vicente Correa Delgado, President of the Republic of Ecuador, addressed indigenous communities on the topic of Good Living, or Sumak Kawsay in Kichwa.

I recently had the pleasure of interviewing my colleagues Carlos Prieto del Campo, Xabier Barandiaran, and Daniel Vazquez from the FLOK Society, a project in Ecuador that aims to create a “free, libre, open knowledge” society. Read on to learn about our plan for influencing structural changes within the country’s economic model using the commons paradigm.

Bethany Horne: What inspired the FLOK Society project? Can you describe its connection to the Ecuadorian government’s decision to embrace open knowledge?

Daniel Vazquez: The idea for the FLOK Society—a “free, libre, open knowledge” society—comes straight from Ecuador’s five-year strategic plan called the Plan of Good Living, which was first published in 2009 (a second version was published this year, but is not yet available in English). The plan itself provides a path for transitioning away from Ecuador’s extractive, oil-reliant economic model toward one that is based on open and shared knowledge.

More specifically, in 2012 a few members of aLabs, a free software company, were in Quito, Ecuador when Julian Assange solicited asylum at the Ecuadorian embassy in London. When the government responded positively, those individuals contacted The National Institute of Higher Education (IAEN by its Spanish initials), which is in charge of the collaborative academic investigation that will inform the transition I just described. Carlos Prieto, the director of IAEN, shared with them the Secretary of Science, Technology and Higher Education’s vision for changing Ecuador’s productive matrix and his strong belief that Ecuador needs to become a "paradise of knowledge.”

That was the starting point for FLOK. We created a proposal for an investigative process that would be carried out in conversation with the Ecuadorian public and the local, regional, and international scientific communities. At the end of the process, our goal is to create ten “base” documents from which policies can be drafted to enable Ecuador’s transition to a shared and free knowledge society for industry, education, scientific research, public institutions, infrastructure, etc.

I should also note that together with the government, civil society initiatives and social movements in Ecuador have a long history of contributing to a common, open knowledge society. This aspiration positions Ecuador within a global community of Internet activists, researchers, hackers, and commoners of all kinds who have long been waiting to join a political, social, and institutional commitment to designing a new economy and society based on the principles of afree knowledge commons.

Bethany Horne: Can you tell us more about the concept of good living and how it relates to the FLOK Society?

Daniel Vazquez: The concept of good living means harmony, equality, fairness, and solidarity. It’s antithetical to the accumulation of wealth or infinite economic growth that isn't shared in common. The Plan of Good Living defines "good living" as a way of life that allows for happiness and cultural and environmental diversity. Good living is also an indigenous concept, known in Ecuador and other Andean countries as Sumak Kawsay, a Kichwa phrase. For us, Sumak Kawsay is a product of Sumak Yachay, which means good knowledge. Shared economic prosperity comes from the sharing of knowledge, effort, and technology. The Plan of Good Living establishes a clear framework for the creation of a peer-to-peer, knowledge-based economy in Ecuador.

Bethany Horne: What’s the connection between the FLOK Society project and the commons approach? Is there also a connection Ecuadorians and global commoners?

Xabier Barandiaran: Only a political/economical approach built around the commons can open the necessary political space for designing a set of public policies that will accomplish the political pact underwritten in the Ecuadorian Constitution of 2008. The commons provides a pragmatic approach for the structural transformation we need to accomplish in the next twenty-five years from the capitalist model to the post-capitalist world-system.

The Ecuadorian society and economy are a perfect match for the commons paradigm. It won’t be possible to transform our current power structure, to build a fair and sustainable societal model, or to design a new model for integrating with the global market using a neoliberal, social-democratic, or “developmentist” approach. But it will be possible using the commons approach, which provides post-capitalist logic for transformation.

There is also a unique convergence between the goals of the Ecuadorian people, their struggles, and our latest political history, and the aspirations and experience of global commoners. The FLOK Society project takes advantage of this extraordinary convergence. For example, we are bringing the hacker and indigenous communities together to do what they do best: share knowledge. We’ve been waiting for this opportunity for a long time.

Bethany Horne: What’s the next milestone for the FLOK Society project?

Carlos Prieto: In the immediate future, we need to integrate FLOK within the council that is guiding Ecuador's productive matrix restructuring. Michel Bauwens from the P2P Foundation has joined us in Quito as lead researcher, and he is forming a research team with top academics from all over the world. The team includes Vasilis Kostakis, a peer production researcher who received his PhD with Carlota Perez; Daniel Araya, an editor of several academic books on open education and peer learning; Janice Figueredo, a commons activist in Brazil who was formerly with the IADB in Washington and Paris; and John Restakis, former leader of the British Vancouver cooperative association who has studied the most advanced and emerging neo-cooperative forms.

These people will arrive in the country soon to start their research. By March, the research process will have advanced enough that we can hold our planned summit.

Carlos Prieto: After more than thirty years of neoliberalism, we need to demonstrate that the commons paradigm can help us create and implement a new set of productive and distributive monetary circuits and flows. We hope the FLOK Society project will impact the possibility for structural change and demonstrate that the scope of the political economy is much wider than the mainstream paradigms want us to believe.

We plan to create a global, peer-to-peer network of researchers that produces a comprehensive body of knowledge. Even if the results of this process of collaborative research and participatory design cannot be fully or immediately accommodated within the Ecuadorian institutional framework the results will become part of the commons as a carefully designed plan to open up new forms of social economy—one that breaks the enclosures of cognitive capitalism in an effort to create a sustainable future.

Bethany Horne is a freelance writer and communications coordinator for the FLOK Society project. She has lived in Ecuador most of her life.

Bethany Horne is a freelance writer and communications coordinator for the FLOK Society project. She has lived in Ecuador most of her life.