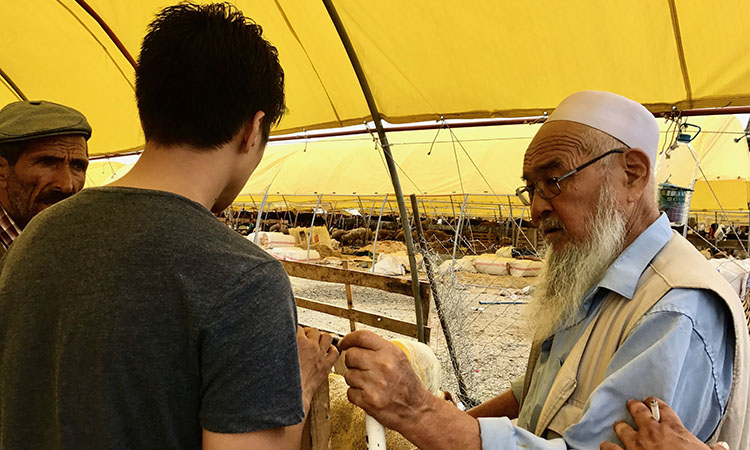 At the recent Eid Al-Adha, or the Feast of the Sacrifice, celebration in Istanbul, Turkey, I had a chance to witness the power of sharing not only among friends, family, and neighbors, but also with strangers. During the festival, sheep, ram, and cattle are sacrificed on the streets in the course of three days. As per the ritual, the buyer of the meat keeps only one-thirds of it. Another one-third is given to family and friends, and the remaining to those in need.

"We share because that is how good things are multiplied," Yunus Hoja, the imam at Istanbul's Atasehir district mosque, says. "And that is how we reduce our pains."

Although sharing is an ever-existing concept in this life we were given, Hoja says, "as we share everything under the sun, offering a family some bit of meat even if once a year makes a big difference in their lives."

Serhan Naşal, a 44-year-old farmer from the southern Adana province, agrees. The ritual is "of course much more valuable to share what one has," he says.

The holiday is also a time when people give to various nonprofits such as the Red Crescent, Veterans' Association, and the Foundation for Children with Leukemia. The organizations then purchase food and other items on behalf of the donors, and distribute them not only within Turkey but other countries as well, including Ethiopia, Kenya, Eritrea, and Pakistan.

But this holiday symbolizes more than just sharing food. It brings together families who may have not seen each other for a year or longer. Family members wake up early during Kurban Bayrami, Turkish for Eid Al-Adha, and stand ready wearing their best, ironed clothes, dubbed bayramlik — ready to mark the sacred period. Not everyone can afford to buy bayramlik — and especially this year, with the currency crisis in Turkey hitting households hard, things have been tougher.

Still, generous acts are everywhere. One woman in the northwestern Yalova province hung 20 washed and ironed outfits in a schoolyard for anyone to take. They were left with a note that read "İyi bayramlar," meaning "Eid Mubarak," or happy Eid in Turkish.

And one mukhtar, a neighborhood head, from the eastern Anatolian province of Adıyaman, collected meat and skin of animals which were sacrificed in a bid to distribute them to the locals. "May God protect him," Mehmet Yasar, one local said for the man supplying around 90 households with meat every Eid for the pasts four years. "He is doing everything he can to help share goodness."

Nimet Kirac is a freelance journalist based in Istanbul, where she covers Turkish affairs. A graduate of George Washington University, she started her career in journalism at CNN International's headquarters in Atlanta. Since then,

Nimet Kirac is a freelance journalist based in Istanbul, where she covers Turkish affairs. A graduate of George Washington University, she started her career in journalism at CNN International's headquarters in Atlanta. Since then, work has been published by the Financial Times, Hurriyet Daily News, and Al-Monitor among other media platforms.