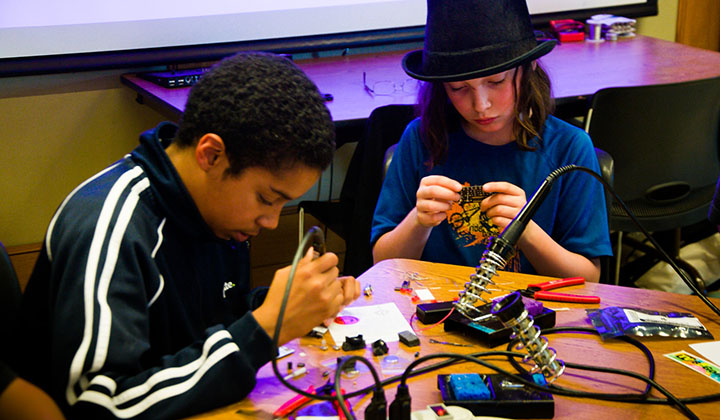 In one corner, a gaggle of teens huddles over laptops. Across the room, another group plays board games. Behind the closed door of a music studio, two boys record on a guitar and keyboard, while another plays video games on a massive projector. There’s a maker space and study nooks, and the whiteboard on the wall advertises activities like a book club and creative writing group. The space is loud, full of kids eating and talking. This is “The Mix,” the teen space in the San Francisco Public Library (SFPL). The boisterous teen zone is very different than a traditional library, but the SFPL is anything but ordinary.

“The Mix,” now in its fifth year, is a nearly 5,000-foot section of the main library designed by its target audience: youth. Program manager Cathy Cormier explained the space’s history while simultaneously filling requests and fielding patrons’ questions. “The Mix” was created using grant funding from the MacArthur Foundation and the Institute for Museum and Library Services. A team of teenagers worked with an architect to design the space. Cormier laughed as she pointed to the small staff offices in the corner. “They said, ‘You have too much space for staff. It should be a youth space.’ So of course, that’s what we did,” she said, referring to the choice to shrink the square footage allotted to staff.

The programs at “The Mix” are all free and open to drop-ins, and they’re mostly fairly informal — on purpose. “We use what we call HOMAGO — a mix of hanging out, messing around and geeking out,” said Cormier. “Because the youth will engage on a higher level eventually, but they have to get comfortable. And for some of them, their lives are really high pressure, so they appreciate that this is a chill space.”

“The Mix” illustrates how one library system is rethinking its role as the digital age has expanded people’s access to information while in many ways weakening community ties. In response to these kinds of social and cultural changes, SFPL leaders decided to double down on the institution’s commitment to social connection and serving its community, and embrace flexibility and accessibility. The SFPL’s dynamism earned it a National Library of the Year Award last year (this year’s winner was L.A. county).

Through programs in multiple languages, art exhibits, speaker series and a variety of accessibility resources, the library manages to reach a variety of populations. In total, the SFPL ecosystem, including the main branch and all neighborhood branches, coordinates 1,500 programs a month for all age groups.

The power of free public space

One of the SFPL’s goals is to provide a space where people can connect to one another and to services, for free.  Most places where people spend time together and connect with others now — bars, coffee shops, gyms — cost money, and that can be a barrier for people to engage. Libraries are a rare exception to commercial spaces. The more events and community engagement opportunities they hold, the better the community is served. “Everything is free, and everyone is welcome, so we bring different types of people together,” said SFPL communication manager Mindy Linetzky. “Different races, ages, socioeconomic differences are all together. That doesn’t happen a lot in our country. So it’s a place to break down barriers.”

The SFPL’s perspective reflects larger societal shifts and how they’ve affected what Americans want from their libraries.

“The library’s role is very much changing in the whole country, and the San Francisco Public Library is at the forefront,” said Linetzky. “We have an intentional goal of community connection. A hundred years ago the goal was for people to have access to books, since they didn’t have it. But now, people are very hungry to be connected.”

Although people still value traditional library services like book borrowing, public opinion is also shifting toward the view of public libraries as community centers, according to a survey from the Pew Research Center. More than six in ten Americans (63%) say it is “very important” for public libraries to provide free events and activities, such as classes and cultural events, for people of all ages.

SFPL’s branch network is key to fostering long term, deep connections with residents and helping to create relevant programming. “Each branch knows their neighborhood, and they know what their community is interested in,” said Linetzky.

Branch librarians work with community members, local nonprofits and other partners to develop programs, and are a valuable resource for residents to connect via informal conversations, Linetzky said: “The best way to get the community involved is the relationship between the branch staff and the people who come in every day.” Because the branch libraries are smaller, they are a more accessible place to form relationships.

Along with general programming, the library has programs geared towards particularly marginalized populations, including services for the deaf, elderly and home bound, as well as non-English speaking populations. City residents can have books mailed to them if they can’t come to the library, and there are full time Spanish and Chinese translators on staff. These groups are more vulnerable to social isolation, so targeted programming is important.

Community members are consulted about library decisions, including the creation of spaces like “The Mix” and others. The branches all have community rooms where residents can plan their own events and clubs. Whenever major decisions are made the library’s members are involved — even those who might not have access to other routes to political engagement. “We are renovating the Mission Library, and we brought the architect out to the story hour,” said Linetzky.  Story hour is a time for children and caregivers to come listen to picture books read by librarians and volunteers; the Mission branch has a very popular Spanish language story hour, which was what the architect came to visit. “We asked the caregivers what they wanted to see in the library, and it was all in Spanish.”

Often, branch programming is coordinated with larger, city-wide programs to create a unified calendar of events that responds to local needs. Every year, the SFPL puts on the “One City, One Book” event, where every branch hosts a program related to a book chosen for its impact that year.

The role of the SFPL isn’t just programming, however. It also sees providing shelter and a safe space for people to relax as key parts of its mission.  In a city like San Francisco, with extreme income inequality and a homelessness crisis, few indoor public spaces exist that are open to all. Every branch of the  San Francisco Public library is open a minimum of 50 hours a week, and the main branch is open 60 hours per week. During periods of extreme weather, it is sometimes kept open even longer. Last year when wildfire smoke blanketed the city for days, the main branch was kept open extra hours, Linetzky said, as a haven for the city’s large homeless population that needed a way to escape the polluted air.  “We have a lot of folks who live on the street who are in here every day,” said Linetzky.

“We need a space for people to connect that’s free, that’s open. It’s an expensive city to live in,” she added. The library is “a place where you can go and be part of a community.”