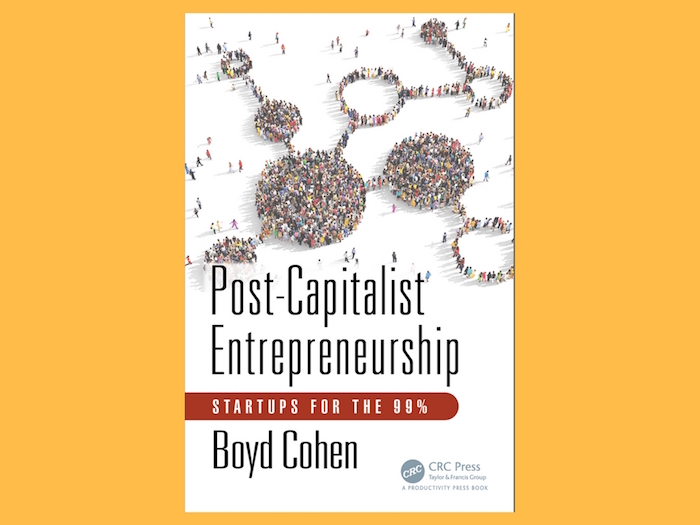 Op-Ed: My first book, "Climate Capitalism," which I co-wrote with Hunter Lovins, demonstrated our belief that capitalism could be oriented to solve some of the world's biggest problems. Since that book was published in 2011, my thinking about the role of capitalism as we know it today has changed. Unfortunately, despite being a business school professor, I have now lost faith in capitalism and have come to generally agree with critics such as Paul Mason, Thomas Piketty, Kate Raworth, and Douglas Rushkoff that we need a new, distributed economic order that puts shared prosperity, not short-term profit maximization at its core.

Lucky for us, the possibilities to transform capitalism and to create a more inclusive economy that operates in better harmony with social and ecological systems is already being developed. In my new book, "Post-Capitalist Entrepreneurship," I attempt to shine the light on the growing movement of alternative organizing occurring around the globe. I consider this the Occupy Movement 2.0. Instead of merely protesting about banks too big to fail, corruption, income inequality, and corporate impacts on climate change and loss of biodiversity, we are now observing droves of innovators collaborating, often with the aid of new distributed technologies, to challenge the failures of capitalism with new models.

The table here lays out some of the foundational arguments in the book about what is wrong with neoliberal capitalism, what frameworks are emerging to counteract them, what types of entrepreneurial organizing have emerged to challenge our traditional thinking about entrepreneurship, and what types of values and mindsets can be observed from these paradigm-challenging innovators. Obviously, there is insufficient space here to summarize in detail the table, but for now I will quickly introduce the types of alternative organizing I have observed through interviewing hundreds of post-capitalist entrepreneurs over the past few years.

While sustainable and social entrepreneurship has been a focus of much of my early research, I have come to realize that it is insufficient for various reasons. For one, many of these entrepreneurs are operating still within a traditional market economy, and for example, once they receive investment, their core values are frequently threatened due to pressure for short-term profit seeking and quick exits for their investors.

Next up, we have for-benefit entrepreneurs, particularly those who have opted for B-Corp Certification. While these entrepreneurs also operate within traditional market economies, they take an extra, invaluable step of shielding themselves from such short-term expectations by legally binding themselves to meet and sustain rigorous social and ecological targets.

Civic entrepreneurs, the subject of my last book, look for ways to resolve citizen quality of life challenges, instead of focusing on consumer needs and wants. Things like bikesharing schemes, civic crowdfunded neighborhood projects to add new parks or infrastructure into communities, apps built from hackathons to help address speed of emergence response times, are all examples of what I consider civic entrepreneurship.

Amongst Shareable readers, the category I need to spend the fewest words is the platform cooperative arena. By merging old-school cooperative governance models, with new distributed and sometimes blockchain-based technologies, platform co-ops like Fairmondo, Stocksy, and Resonate are poised to challenge the platform capitalists.

Peer production and consumption groups that co-create and consume everything from food to energy to digital files for 3D printing are also challenging our understanding of entrepreneurial organizing within traditional market economies.

Distributed Autonomous Organizations (DAO) show potential in that they eliminate the need for any intermediary, even cooperative organizations. There are few validated models here, however, with some of the closest examples being Open Bazaar (an eBay like DAO for P2P goods exchange) and District0x which is creating tech platforms for plug and play DAOs which raised around $9 million in a token sale.

Many of the projects found in the above categories also embrace — to differing levels — the concept of commons-based peer production. With this type of post-capitalist enterprising, rather than seeking to develop and monetize proprietary innovations, the idea is to share and co-create innovations with the broader community. Open-source software is a long-standing example but there are cool emerging projects across many fields, such as the Global Village Construction Set which aims to enable any rural villager or farmer anywhere in the world, access to designs for affordable agricultural and construction equipment.

When we combine all of the above, with concepts like basic income and fab cities, one can start to see a new vision for an inclusive economy. For me, this economy moves towards a new, local, but globally interconnected, digital, collaborative, and urban economic model of shared prosperity.