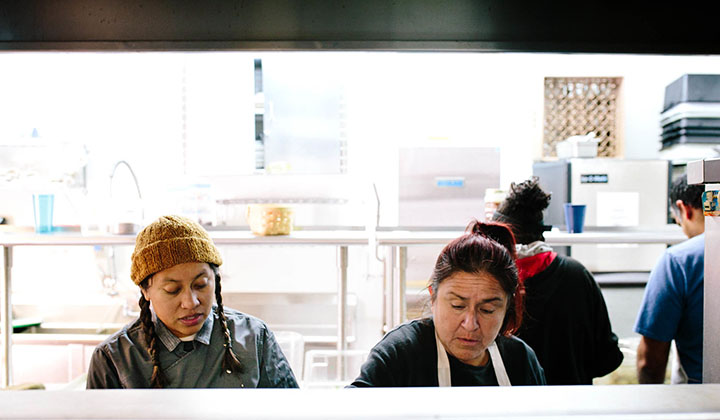 Each year, Food Shift collects 120,000 pounds of food that would have otherwise been thrown away. With that bounty, the nonprofit feeds 12,000 people and trains 16 low-income individuals to prepare and cook healthy meals using whatever food is available.

The Alameda, California-based nonprofit is taking the traditional food bank and community kitchen model one step further by pairing it with an apprenticeship for residents of a local affordable housing community. The goal is “to create a scalable and replicable model that integrates public health, economic equity, and environmental sustainability,” said founder and executive director Dana Frasz, who modeled the organization on D.C. Central Kitchen, a community kitchen in Washington, D.C.

Nationwide, 40% of food goes unused, while 50 million Americans go hungry. Food Shift, Frasz said, is all about “trying to balance out this imbalance in society where some people have a lot and then there are a lot of people who are struggling.”

Income inequality is particularly pronounced in the San Francisco Bay Area. About 1.5 million residents live in poverty, even as the surging tech industry has accelerated economic growth and contributed to a massive increase in the cost of living. This means families are spending more of their income on housing, while many of the “working poor” make too much to qualify for CalFresh, California’s version of the federal food-stamp program now known as the Supplemental Nutrition Assistance Program (SNAP), according to a report from the East Bay Times.

In an effort to reduce both social inequities and environmental imbalances, Food Shift partners with local produce markets like the San Francisco Produce Market, receiving surplus items or produce that would have been rejected due to cosmetic imperfections. The organization distributes 80% of this food to community partners — like CityTeam Ministries — that feed the hungry. The other 20% is used in Food Shift’s culinary training program and “social enterprise” catering business. The business employs a sliding scale, so companies like Google pay full price, while companies with fewer resources pay less, allowing the entire community to benefit from the service.

Under the tutelage of Suzy Medios, Food Shift’s culinary educator and chef, 16 apprentices — some of whom are working for the first time — learn how to how to prepare healthy meals using available food. The trainees all come from Alameda Point Collaborative, a housing community for formerly homeless individuals where 99% of residents live below the poverty line.

“We’re not just feeding [the apprentices],” said Medios. “We’re giving them tools to sustain themselves in the future, so they’re not dependent on us, they’re able to go off on their own and move forward.” After learning valuable customer service and teamwork skills, many apprentices have gone on to work in senior care facilities or have returned to school. One landed a job with Tesla.

Food Shift has also helped local governments — including in the heart of Silicon Valley —  investigate ways to alleviate food insecurity. “Food alone won’t solve hunger,” said the organization in a 2015 report commissioned by Santa Clara County. Instead, cities and counties need to work with one another as well as with food banks and other nonprofits to develop and improve both food rescue and food access programs. Local interventions in turn need to be paired with systemic changes, like “curbing the national overproduction of food … streamlining the food assistance benefits process, improving education for all, offering nutrition education, and providing affordable housing and fair wages,” said the report.

California took a step toward addressing food waste in 2016, when Governor Jerry Brown signed  SB 1383, which aims to reduce edible food disposal by 20% by 2024. The law also takes Food Shift closer to its goal of making food recovery a municipal service (like trash or recycling pickup) rather than a charity.

While public policy changes are an important piece of Food Shift’s work, Medios sees something even deeper taking root in its workplace. “Our kitchen is very unique,” she said. “It’s not just a space where people come to learn, it’s a space where we come to connect and heal.”