How Corey Hagelberg is using art, culture and collaboration to help heal his community - Shareable
Skip to content 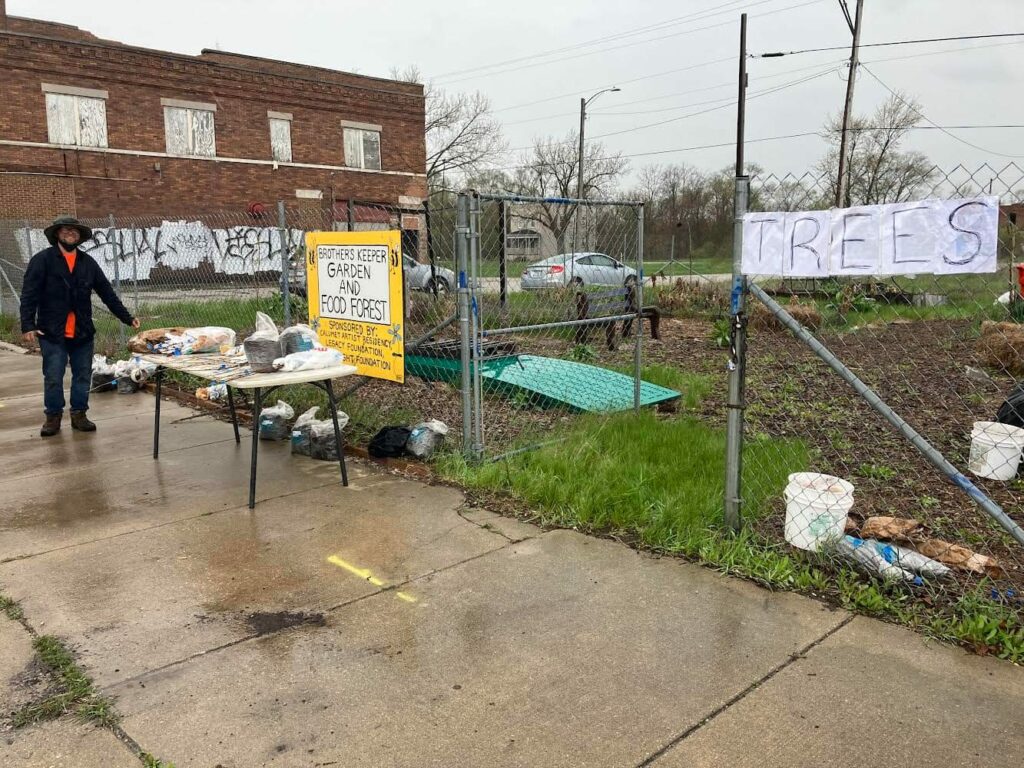 When you first meet Corey Hagelberg, he may seem quiet, unassuming even. But underneath the modest demeanor is a true cultural innovator.

Hagelberg, 38, is a social justice artist, community gardener and founder and Executive Director of the Calumet Artist Residency. He’s an active proponent of the arts and is invested in localized regenerative efforts to reconstruct his hometown of Gary, Indiana into a self-sustaining entity.

Even as a Gary native, Hagelberg admits that his journey into community activism wasn’t always clear.

After graduating with a Bachelor of Fine Art degree from Ball State University in 2006, Hagelberg says the job market for sculptors — his chosen path of study — was nonexistent. He was unsure what kind of art he wanted to make, so he went to work for his parents building playgrounds across the country.

The work was grueling — digging holes, mixing and pouring concrete, and handling heavy equipment — but it was also income. He traveled to over 25 states as a freelance playground builder and gave fellow artists with whom he had met in school the same opportunity to make money. Doing this work helped him to see that he wanted something different.

I felt compelled to find a way to use my art to make a difference and to do it in Gary. — Corey Hagelberg

Hagelberg’s former partner Kate Land and his parents were key to his decision.

“My parents moved to Gary during white flight, against the trend. My mom worked as a social worker for decades, and my dad built affordable playgrounds. So my work to fight the stigma of Gary, which also exists within our own citizens, is really following in their footsteps,” Hagelberg said.

By 2012, in the midst of a housing crisis, Hagelberg and Land returned to Gary where they could live more affordably than other popular places like Chicago, Portland, or Austin where some of their friends were relocating.

Returning to his roots

Hagelberg returned to a city described as one of the most abandoned municipalities in the nation. Gary was hemorrhaging people. In a 2020 census, Gary’s population was 75,486 in 2020, down over 27,000 people since the year 2000.

Predominantly Black, the city’s other demographics included a median household income of $31,315 and a poverty rate of 33.2%. A 2019 census found only 36% of Gary’s population were employed.

Some blamed these declines on political infractions that led to Gary’s resources being usurped by other cities. Others cite economic opportunity deficits, disinvestment, redlining, and major abuses of the environment by industries and utility companies as potential factors.

But Hagelberg didn’t let these dismal conditions sway his convictions. In fact, he says, they solidified them.

“I decided to center my art practice around the idea of social change in this region because I believe we must model what we want to see,” Hagelberg said.

One of his first forays into community activism involved organizing around environmental issues like corporate air pollution and climate injustice, continuing in the spirit of earlier leaders and elected officials like the late Mayor Richard Hatcher.

My vision is a regenerative city where we don’t have to bring in so much from the outside. Where we are supporting each other or working together in a way that we have healthy food, food security, and resilience to the effects of climate change.

Hagelberg’s vision can be seen in his community works as well as his imaginative woodcuts, which showcase gothic likenesses of trees with braided roots and sunflower fields. Etched into each art piece are adages, like “Grow strong roots”, “And then the smokestacks were gone” or “Make peace, plant a tree”.

While creating his own art, Hagelberg saw collaborations with fellow artists as a way to support the community’s call for an end to food deserts and the desecration of Gary’s natural resources.

Along with Land, he acquired and converted two neighboring abandoned houses in Miller, a lake shore neighborhood on Gary’s far east side near the Dunes, into the Calumet Artist Residency (CAR) in 2012. The two properties became studio and living space for artists in residence where over 40 artists could stay anywhere from a few weeks to several months.

In 2014, CAR became an official nonprofit organization through which Hagelberg worked with area schools and community organizations to give voice to the people who knew Gary intimately. The Gary Poetry Project was one such example.

“We had over 60 workshops where we had a form that people would fill out. Over 280 people chose a line that would be part of a collaborative poem, and we painted those lines throughout the city,” said Hagelberg.

A noted journalist, historian and playwright, Biggers had begun developing skits to help communities like Gary envision themselves as regenerative cities, in efforts to combat climate change and create local food security.

One such script was performed at the local Progressive Church urban farm. Entitled South Shore Ecopolis, the play described what a regenerative Gary would look like in 2030.

“It was a beautiful vision of pop-up shops, corner bakeries, urban gardens, renewable energy, recycling things, and working as a community to meet the city’s needs,” Hagelberg said.

The beauty of the play, Hagelberg says, was that it highlighted work that folks were already doing in the community.

“Part of it is not just saying look what could happen if we did this. It’s saying look at what will happen as a result of the work already being done,” he added.

“It was a slow process of learning what dynamic an artist in residency could bring to the community and seeing what other artist residencies around the country were doing in terms of bringing artists in to do innovative projects in communities or supporting artists in that community or both,” said Hagelberg who visited Braddock, Pennsylvania, a city that shared Gary’s struggles, to observe their arts and gardening social practices.

“They used the Braddock Public Library as a vehicle for their work, creating lending collections of household tools and materials, artworks, and community spaces. There was incredible beauty in their practice,” he said.

Other projects included two poetry zines that celebrate Black history and culture and the Resilient Midtown Tours. In the 1940s and 1950s, Gary’s Midtown had been the place where Blacks were forced to live during the city’s segregation and Jim Crow practices.

Instead of a racial pen, this Central District became a place “where early opportunities opened up for Blacks. It was the only place in town for decades where Black politics, art, cuisine, culture, and music could thrive freely,” said historian and freelance writer Korry Shephard, who collaborated on this project as a tour guide.

Gardening for good: Sowing the seeds of change

Hagelberg credits social change artists like Theaster Gates for helping him identify various ways in which art could create social change. Localized community organizing movements gave him the knowledge that culture could act as a major precursor to change.

Observing Gates’ immersive life practices to intentionally pursue art through everyday activities, Hagelberg learned that even “shoveling mulch” could be part of the process of creating art, which is the reason Hagelberg can be found in community growing spaces across the city as much as his own studio.

For Hagelberg, community gardening was also a way to express himself artistically and demonstrate his love for Gary and its residents.

Through gardening, Hagelberg has collaborated with numerous organizations, such as Brother’s Keeper, the Sojourner Truth House, and Faith Farms.

Libré Booker, founder of Living Green Garden in Gary, describes Hagelberg as a person who networks easily and shares his knowledge and connections with an open hand.

“I don’t know how Corey did it, but he somehow knew of the different community gardens in Gary’s Midtown neighborhood and connected us,” Booker said. “This network led to the recently formed Midtown Garden Coalition, devoted to providing food to local residents and eliminating food deserts in Gary.”

Continuing on for the love of community

When asked to reflect on the impact of his work, Hagelberg says it’s hard to quantify. Arbitrary metrics aren’t really the point of his regenerative community efforts.

“It’s hard to say,” he says. “I mean, this year we gave away 800 native fruit and nut trees to support local food resiliency and natural restoration efforts. In the last three years, we’ve produced around 1000 pounds of food.”

Numbers and notable accolades aside, Hagelberg says his biggest motivator in continuing his work is to change the status quo by shining a light on the uncomfortable, systemic truths that have shaped his community — and many like it.

“As an artist and community organizer, I think I’m starting conversations. One of the major things we do in terms of all these issues is to talk about them to make sure we don’t shy away from discussing racism, climate change, or the effects of extreme poverty,” he said. “Because when those things remain in the shadows, nothing ever moves forward.”