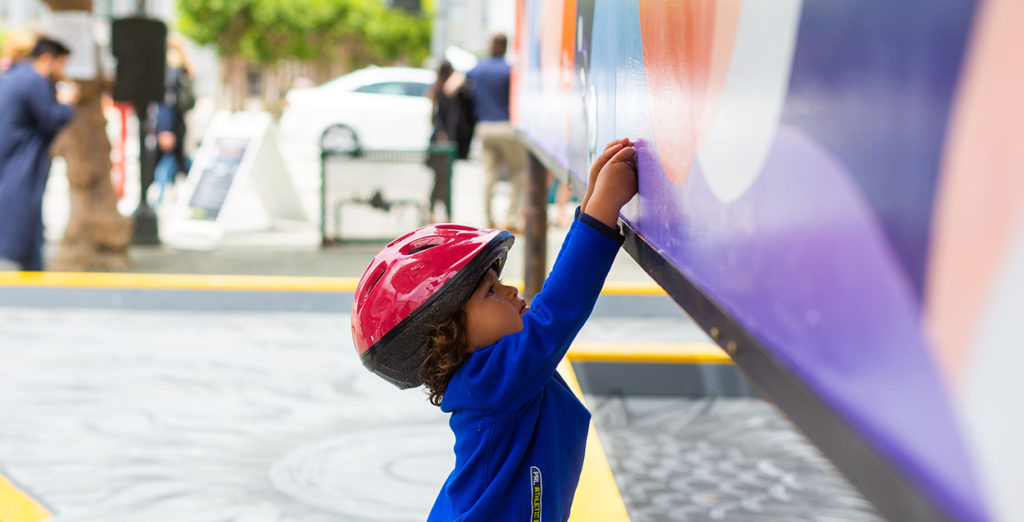 In the summer of 1971, Dr. Philip Zimbardo, a psychologist at Stanford University, conducted what became known as the “Stanford Prison Experiment.” A group of 24 volunteer college students was split up into two separate roles, playing inmates and guards in a makeshift “prison.” The controversial social experiment quickly and infamously spiraled out of control.

“What he learned from that is that it’s so easy to turn someone bad given a certain context or situation,” says Marie Applegate-Swanson, the creative director of the Village Artist Corner at San Francisco’s Asian Art Museum. “He then decided to pivot and look at the other side of that — how can you make it easy for someone to be good or pro-social in a situation?”

Zimbardo founded the Heroic Imagination Project, a nonprofit that aims to inspire heroism in everyday situations. The work inspired Applegate-Swanson, who had previously collaborated with Zimbardo, in conceiving the upcoming project for the Village Artist Corner, an outdoor extension of the museum.

The Corner, which features a new mural every season, unveiled its latest creation, painted by San Francisco-based artist Alice Lee, this July, focusing on the theme, “Together Let’s Be ____.” From July through December, each month will offer a new word to fill in the blank, each embodying a “heroic skill”: courageous for July, followed eventually by patient, strong, determined, wise, and generous. The two-sided mural is also interactive, inspiring visitors into a call to action for each skill.

“There are six colors represented in that mural, and each of those six colors tie to each of the new heroic skills that we’re going to feature each month,” Applegate-Swanson says. “The idea is for people to have a moment with what it means to be courageous and to write down or draw on a color-coded sticker how they imagine using that skill in an everyday situation and then to adhere it to the mural.”

The interactive nature of the mural project is one result of the museum’s recent push for more meaningful public engagement and community building. “In mid-2015, the museum was having parallel conversations inside about how to be a better neighbor to our civic center communities, how to connect locally with the residents that live in the neighborhood and the people who work here, none of whom we were seeing reflected in our audiences who were coming into the building,” says Allison Wyckoff, the museum’s associate director of public and community programs.

The Village Artist Corner, launched in 2016,  became the answer. Breaking down the walls of the museum and offering a space within the surrounding neighborhood itself shattered certain unwelcoming stereotypes about “what is a museum, what is art, and who are the typical people attending museums,” Applegate-Swanson says.

Most of all, the space is meant to serve as an inviting area for community participation. Each season’s mural project is accompanied by “activations” — additional pop-up installations and activities occurring every first Sunday to provide further interactivity with the theme. Each mural has also included museum-appointed “stewards,” formerly incarcerated individuals — coming from Hunters Point Family, a local community-based organization — who are situated next to the mural seven hours a day, seven days a week to interact with and inform visitors about the mural project.

In some two years since the Village Artist Corner was first unveiled, the result has been overwhelmingly successful, particularly in facilitating connections across all backgrounds in what Applegate-Swanson calls the “petri dish” of diversity within the surrounding Civic Center area. “People want to engage with each other,” Applegate-Swanson says. “They want a reason to stop and talk to each other. It’s really as simple as that.”

This project, though, encourages an audience to be not only in conversation, but perhaps inspired to action. As the mural fills up with visitors’ handwritten notes, the messages might serve as reminders toward daily heroism — not only individually, but also as a community. “I hope that it connects people in a deeper and more meaningful way, that it provides a space for people to come together and learn more about each other and our commonalities, things that unite us rather than divide us, even though on the surface it might seem like we’re very different,” Wyckoff says.

The power of that potential is especially resonant in a time of deep fissures across the country, Applegate-Swanson says. “Having a real-person interaction can remind us of being more empathetic and that we’re all human beings just trying to do this,” she says, “and we should try to do this together.”

On Sunday, July 7, the Village Artist Corner officially unveiled the latest mural with its first monthly “activation.” As the nearby Fulton Street block party — a gathering of food stands and activities every first Sunday of the month — coincided with the opening, a diverse collection of passerby at Civic Center stopped by the Village Artist Corner and interacted with Lee’s artwork.

Visitors were given chalk to draw and write on one side of the mural, while on the other half of Lee’s double-sided creation they engaged with a call for courage. On orange sticky notes, people wrote down their hopes for how to engage with courage in their personal lives, before adhering their messages to the swathes of orange in the six-colored mural. Some notes were more playful — “tying my shoe” read one. Others proposed deeper challenges: one note hoped for sobriety, and another wrote of “coming out” to parents.

Each participant was given an orange button, emblazoned with the word “courageous,” that served as a reminder. For individuals who eventually return to the Village Artist Corner in the future, the mural will offer gold star stickers to place next to their notes if they ultimately achieved their form of courage. Applegate-Swanson hopes that over the coming months, not only will the mural be filled with a rainbow of personal notes, but it will also shine with these gold stars — a reflection of a community actively bettering itself in small ways.

Brandon Yu is a culture and arts writer whose work has appeared in the New York Times, Variety, the San Francisco Chronicle, and San Francisco Magazine. He is also a

Brandon Yu is a culture and arts writer whose work has appeared in the New York Times, Variety, the San Francisco Chronicle, and San Francisco Magazine. He is also a books columnist for the Chronicle.