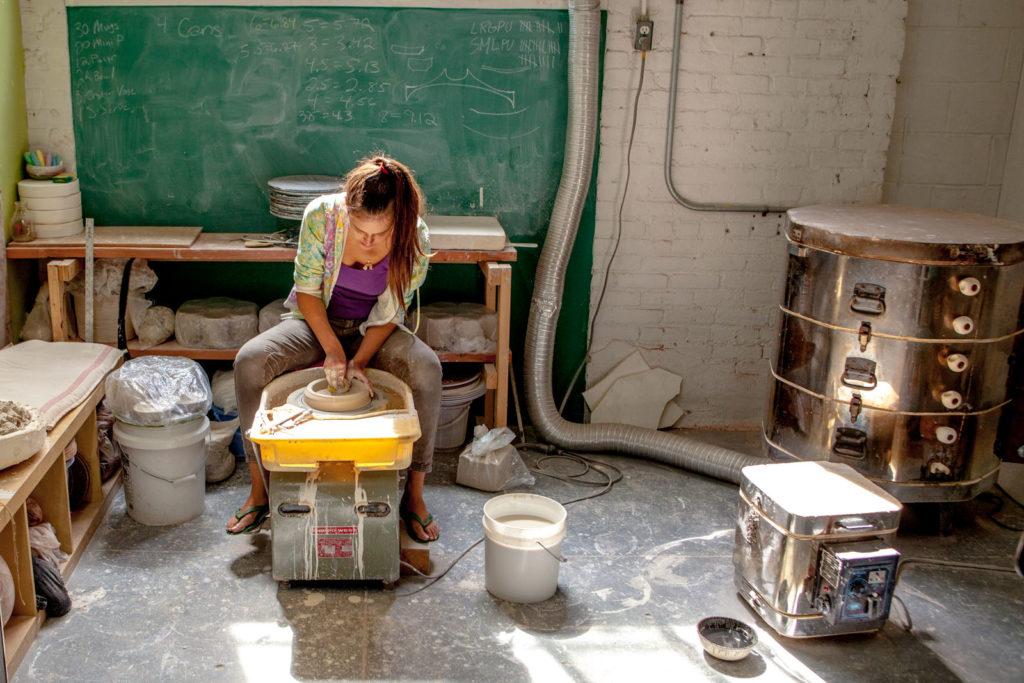 Pottery is "such a visible, shareable art form," says Jennifer Waverek, founder and director of BKLYN CLAY, a studio that since 2016 has served as a coworking community for ceramics artists. Tactile, less technological, slower paced — this world couldn't be further from the fast-paced startup world that brought us a host of coworking spaces. Potters cannot succumb to digital distractions — they must sink their hands into terra cotta or other types of clay and sculpt with laser focus. Pottery collectives, many of which are based in Brooklyn, New York, are bringing artists into a vibrant, empowering community. They're allowing burgeoning and established ceramists to share resources — from kilns to ideas — and sculpt their futures together.

While Instagram and Etsy helped catapult handmade ceramics into popularity, for dedicated ceramics artists, handmade pottery is a way of life, not a passing trend. Artists need a physical place to work and many cannot afford their own studios. Potter Dominic Sparano says the cost of clay, kiln, wheel, and other materials "can be staggering." "For a fraction of that cost anyone can have access to a full studio plus instruction to learn one of the oldest art forms in the world," he says. 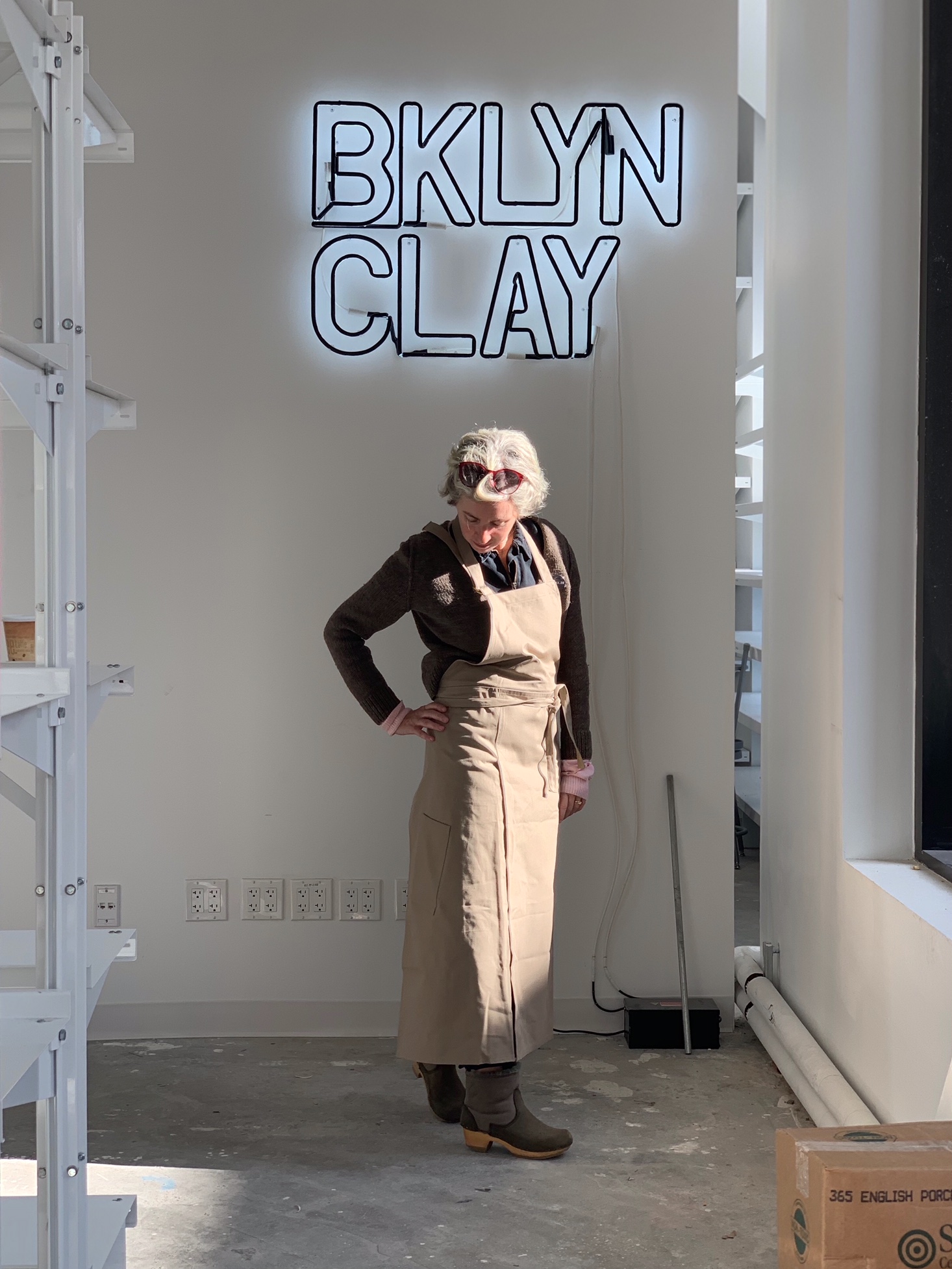 Some members say that being part of a collective helps them cope with challenges that arise from doing this work. For Nadeige Choplet, founder and owner of Choplet Ceramics in New York City's Greenpoint neighborhood, handbuilding and wheel throwing are like therapy. "You have to accept failure and move on," she says. Accepting failure is certainly an easier task when surrounded by a supportive community. Choplet wanted to socialize without sacrificing productivity, so in 2005, she invited seasoned artists to work with her, began teaching classes, and sharing her materials. She says she identifies as an artist, not a businessperson. "It's definitely not a very practical business move," she says. "I was not going to start saying, 'Hey, there is this clay but it's just for me'… I was putting it at everyone's disposal." Choplet says, she wanted to "share what I've got with my fellow artists."

One of these artists, Danielle Clare Pomorski, has been creating pottery at Choplet Ceramics for the past four months and went to start her own company, DCP Ceramics. Pomorksi says potters face numerous roadblocks when creating pieces — "cracking, breakage, overdrying, glazes running, and even explosions." With over 30 wheels, Choplet offers a non-competitive atmosphere of like-minded learners where people have the freedom to fail. "Relationships build on wanting to see the people around you succeed," Pomorski says. "And when you make your first truly beautiful piece, it doesn't feel at all like bragging to show your classmates who have been there with you through the process."

Both Choplet and Waverek compare their spaces to WeWork, emphasizing that the coworking revolution is not just reserved for those in the tech industry. BKLYN CLAY recently moved to the Prospect Heights neighborhood, doubling in size to 5,200 square feet. Furthermore, these spaces aren't anomalies. Other Brooklyn collectives include Clayworks on Columbia, Clayhouse Brooklyn, and Clay Space 1205. Williamsburg Ceramic Center is a separate space affiliated with Choplet where experienced potters take charge of their careers on their own terms — receiving their own clay deliveries, mixing their own glazes, and firing their own kilns. Still, they have support if they need to troubleshoot, and exchange ideas with others. They work independently, not in isolation. 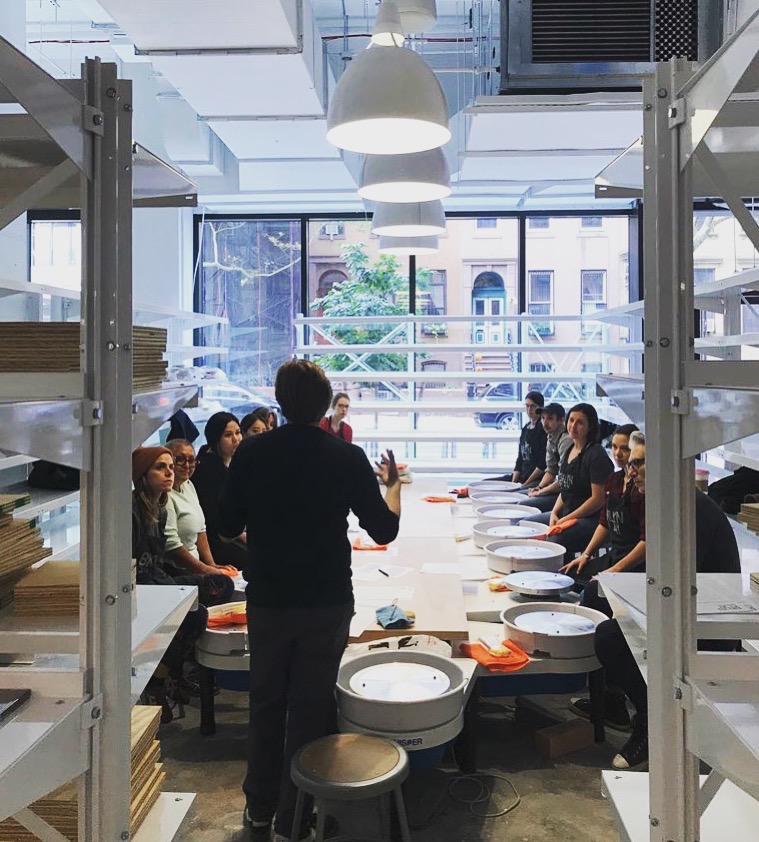 Constance du Bois made the leap from Choplet to the Williamsburg Ceramic Center and says that it has facilitated her growth by providing a space where she can produce more work while continuing to experiment with "glazes, shapes, techniques." Many artists go on to form their own studios, often accompanied by friends. They seek out new opportunities, which often take them beyond Brooklyn. Brooke Winfrey, who taught at Choplet for seven years, now works with other full-time potters out of a communal studio in Costa Mesa, California. Pomorski recently returned from a "knowledge exchange" trip with two fellow artists, travelling to Oaxaca, Mexico, a region with a rich pottery heritage. It's home to Colectivo 1050°, a collective which seeks to create functional objects inspired by the traditions of Oaxaca. From Brooklyn to Costa Mesa to Oaxaca, communal spaces allow artists to prosper and pottery to shine. Why have these collaborative studios yielded so many success stories? The answer is clear to Pomorski: "Ceramics artists are generally very generous. When that group is working together it's like a coworker's dream space."
Header image provided by Brooke Winfrey
Have you listened to our new podcast "The Response"? It's a riveting look into how communities help each other out after deadly natural disasters. Listen here: