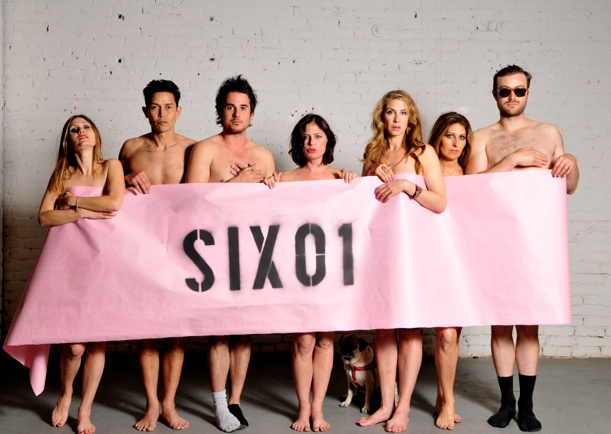 Back in the Fall of 2010, a television show titled The Whole Truth aired a mere six episodes before being cancelled. Though the audience didn’t quite click with the show, three of the actors — Maura Tierney, Anthony Ruivivar, and Sean Wing — clicked with each other. A year later, they formed an artists’ collective, dubbed Six01 Studio, with a few colleagues and turned a huge downtown Los Angeles warehouse into a vibrant performance space/art gallery/sound stage.

Ruivivar recounted the moment of inspiration: “There are two fundamental things that sparked the idea. One, I was sitting there thinking about how many talented people I know and wanted a rewarding way to house that talent under one roof, to focus all that ‘homeless energy.’ The second element to that was finding a creative way to remove the roadblocks that hinder artistic endeavors at the point of conception. All too often, we, as artists, have great ideas or intentions, but they’re stifled before they even start by our percieved inability to see them through to the end. Having a collective of artists — from different disciplines, under one roof — made perfect sense to remove those roadblocks. Once I started to talk to artists about this idea, they all had the same feeling of frustration. Now there are no more excuses.” 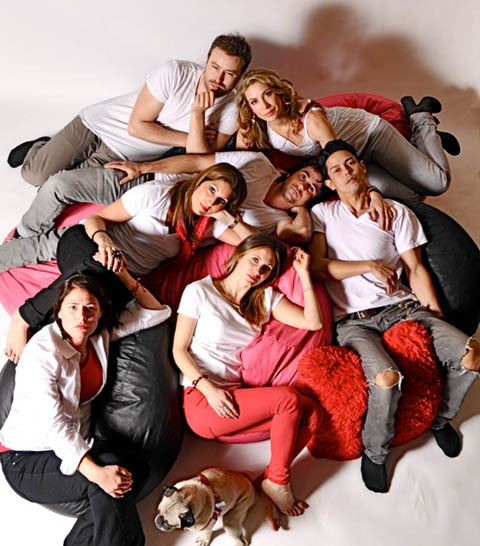 That artistic frustration and the founding of Six01 represent a theme that has recurred throughout history dating back to, at least, Ancient Greece, as artists’ collectives have long served as breeding grounds for collaborations taking myriad forms. Whether as a state-established association or some other less formal coming together, these collectives bring like-minded individuals together to share and enhance creativity — as well as resources, including space, materials, and equipment. In addition to actors Tierney, Ruivivar, and Wing, Six01 Studio also counts actors Yvonne Jung and David Heckel, photographers Jane McKidd and Louise Fancey-Mirren, and cinematographer Nathan Levine-Heaney as its core group. Ruivivar noted, “We definitely want more members, but, as it’s such an intimate environment, we all need to make sure they gel well within the group. We also want to flesh out the disciplines represented at Six01. Visual artists, designers, writers, producers, etc. It’s our hope to have every tool we’d need in the bag to self-produce a wide variety of projects. We have a raw 7,000-square-foot space, equipment, and a lot of creative juice… anything can happen.”

And they already are! Having officially launched in December of 2011, Six01’s projects have since reached out to embrace their broader creative community, bringing in outside actors, writers, producers, artists, and musicians … such is the beauty — and, really, the point — of the collective model. As Ruivivar observed, “The benefits are staggering. Personally, I’ve been more creative in the past year than I have since I moved from New York seven years ago. … Because of my involvement in the space, I’ve thrown myself into artistic endeavors I’ve never touched before. Everyone involved in the collective feels the same way. We’ve done art galleries, webisodes, ongoing live performance pieces, music videos, stop-frame animation, readings of new works, a full production of a play, photo shoots, film production, screenings, and live music — all in under a year.

“We’re also at ground zero for a more honest creation of content. The entertainment landscape has fundamentally changed. Boundaries of mainstream entertainment are being blurred. Content and the way it’s created and consumed are shifting and expanding. We, at Six01 Studio usher in that spirit by using high-end talent (who work at the studio level) to produce and create content outside the system — free of the typical constraints.”

Another beauty of the collective milieu lies in its broadness. The model, itself, can be based simply around a workspace and its inhabitants, as in the case of Six01; or, it can wander off into a communal living arrangement, a cooperative marketplace, a school, a neighborhood, or countless other forms. And, though the creation of art is generally at the heart of a group’s mission, politics very often have a place on the manifesto, as well. Various examples throughout history include the Musée du Louvre in Paris, France, which was occupied during the French Revolution and turned into a public showcase, and the Russian Artel of Artists which dates back to 1863 and was followed, during the Russian Revolution, by artists’ groups that the state established in various communities. In the more contemporary era of the 1960s, Fluxus began its intermedia examinations sparked by John Cage’s experimental music and Marcel Duchamp’s found art compositions. Yoko Ono, John Cale, Ken Friedman, Jean Dupuy, and many other artists, writers, scholars, composers, and curators are counted as Fluxus alumni.

Flash forward to the 21st century and find that, as evidenced by Six01 Studio, artists’ collectives are alive and well — flourishing even — across the globe. Here are some prime examples:

Using a thoroughly shareable model, the Art Monastery has, for five years now, combined communal living with communal creating at their pilot site in Italy. And it seems to be working pretty well. Dedicated to “cultivating personal awakening and cultural transformation through art, contemplation, and community,” their goals are certainly loftier than some collectives’, but so are their results. From silent meditation retreats to Gregorian Chant concerts to site-specific visual art installations, Art Monastery’s reach is both deep and wide … and intentionally so.

Liz Maxwell, the Project’s Artistic Director, explained their genre-bending exploration: “While there are many examples of monastic hermitages (The ancient Desert Fathers were monks living on their own for decades in the raw elements of the desert.), contemporary monasticism has evolved to be a largely communal experience. We believe that there’s something interesting and, more than that, vital in the world today about engaging in this ancient practice and applying it to the artist’s life. At this point, it’s a hunch that we’re placing our bet on — that artists can learn something from monks, and maybe even vice versa. It’s an experiment, but one that’s going really well and is incredibly exciting to wake up to every day.” AMP’s mission statement tags the combination as “a radical act.” But, even radical acts take funding, hence Art Monastery’s current IndieGoGo campaign.

In a country where being outspoken about anything can land you in prison, being creative is a slippery slope thanks to the impossibly blurry line between dissidence and art. If nothing else, Ai Weiwei taught us that. Nevertheless, a group of electronic art creators under the Liu Dao (meaning “island number six”) moniker came to be in 2006 directed by French curator Thomas Charvériat. Six Chinese artists are among the various writers, performance artists, photographers, engineers, and multimedia artists that comprise the group. Galleries and museums in Shanghai, Paris, Milan, Bangkok, Hong Kong, Rome, Taipei, Macau, New York, Basel, Dubai, and Sydney have all showcased Liu Dao’s work. As of this month, Liu Dao was slated to open their own gallery in Hong Kong. 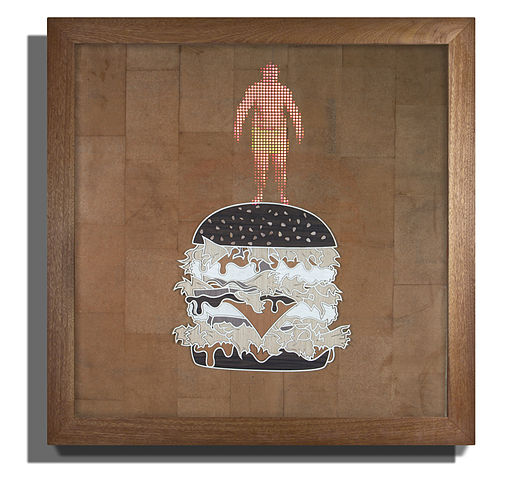 Known as RTS, the Reclaim the Streets notion can be traced back to author Marshall Berman’s 1981 All That Is Solid Melts Into Air:

At the ragged edge of Baudelaire’s imagination we glimpsed another potential modernism: revolutionary protest that transforms a multitude of urban solitudes into a people, and reclaims the city streets for human life.

A decade later, Earth First! staged the first RTS action in Brixton, London. It wasn’t long before the idea made its way across the United Kingdom and into the world. Since then, members have participated in non-violent direct actions in favor of public spaces and against capitalism, noting, “Our streets are as full of capitalism as of cars, and the pollution of capitalism is much more insidious.” Though a resistance movement at its core, Reclaim the Streets gets creative and playful with its actions, occupying thoroughfares with parties that involve dance music, free food, and play areas. London, Brighton, Liverpool, Edinburgh, Sydney, Amsterdam, Helsinki, Berlin, Stockholm, Seattle, Nashville, Prague, Brussels, Davos, Lyon, Dublin, Zurich, Melbourne, and San Francisco are among the cities that have had their streets reclaimed. 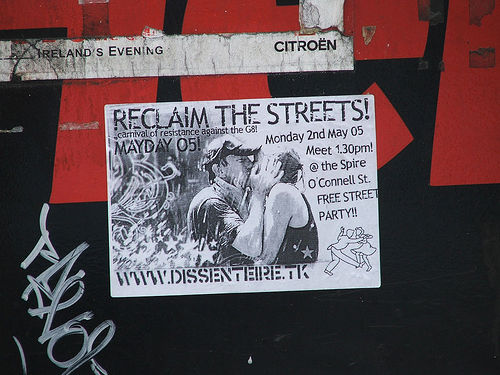 Here are more artist coalitions, in the U.S. and abroad:

What are the artists’ collectives in your community?