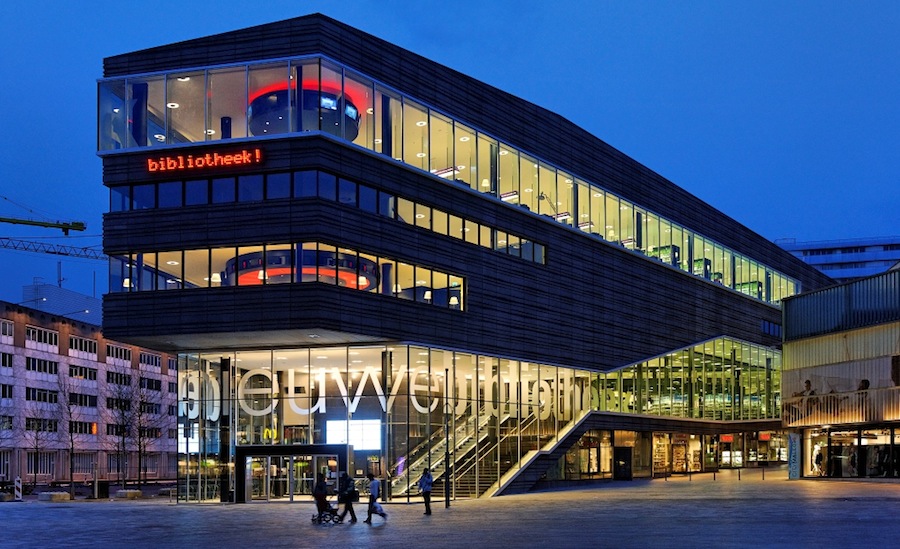 Facing declining visitors and uncertainty about what to do about it, library administrators in the new town of Almere in the Netherlands did something extraordinary. They redesigned their libraries based on the changing needs and desires of library users and, in 2010, opened the Nieuwe Bibliotheek (New Library), a thriving community hub that looks more like a bookstore than a library.

Guided by patron surveys, administrators tossed out traditional methods of library organization, turning to retail design and merchandising for inspiration. They now group books by areas of interest, combining fiction and nonfiction; they display books face-out to catch the eye of browsers; and they train staff members in marketing and customer service techniques.

The library is also a Seats2meet (S2M, a sponsor of Shareable) location where patrons are empowered to help one another in exchange for free, permanent, coworking space, and they utilize the S2M Serendipity Machine to connect library users in real-time. They also have a bustling cafe, an extensive events and music program, a gaming facility, a reading garden and more. The result? The New Library surpassed all expectation about usage with over 100,000 visitors in the first two months. It is now considered one of the most innovative libraries in the world.

Shareable connected with Roy Paes, manager of the library’s Science Desk, and his colleague Marga Kleinenberg, to learn more about the inspiration for the library, its transformation into a thriving third place, and some of the library’s forward-thinking offerings.

[Editor’s note: the responses are collaborations between Kleinenberg and Paes.] 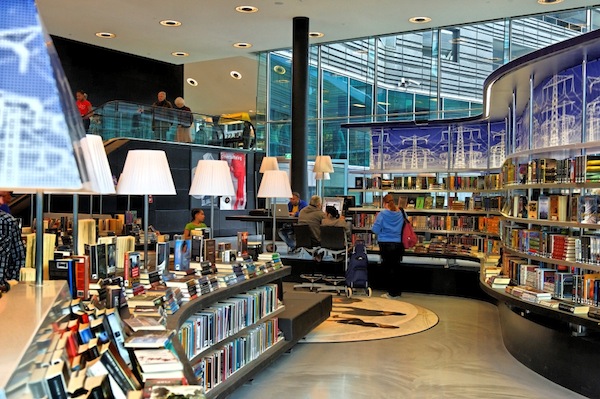 With out-facing books, the New Library looks more like a bookstore than a library

Shareable: When plans for the New Library were being made, there was a downward trend in library memberships and a question of what a community library should be? How did these factors influence the design and creation of the New Library?

Paes and Kleinenberg: The downward trend created the idea that we had to make a radical change. A large survey among customers which also included socio-demographic questions told us more about the customer groups. Customers also found the library dull and boring. The results forced us to think about a redesign of the library. We got valuable inspiration from successful retail models and techniques. For each customer group we created a personal shop. An interior designer was contracted to add color, furniture, styling, signing etc.

Rather than keeping to a traditional library model of organization, you created the New Library following a retail model . What prompted this and what are some of the key features of this model?

The areas of interest of the customer groups had no relation to how the library system worked. Customers had to search their books throughout the library. By putting together fiction and nonfiction per customer group (interest profile), we made it easier [for people] to find what they are looking for. And above all, we could create a certain atmosphere that suits the customer group. To do this, amongst others, retail techniques such as frontal display, signage, graphics and photos were used, and also a more proactive, customer-friendly approach by our employees was introduced. 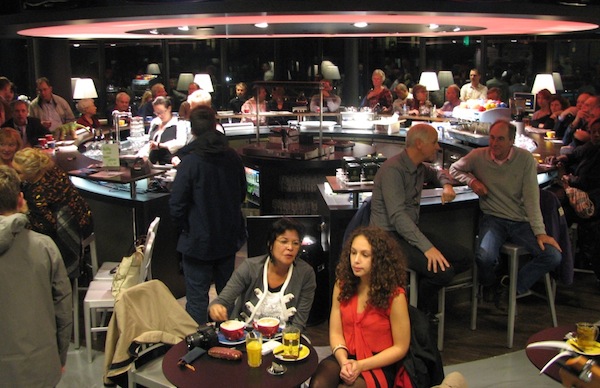 The library features a bustling cafe

How was this new design received by librarians?

In the beginning, everyone was sceptical. The library world did not change, the system was in use for years and everyone knew where everything was. In the application of the concept in the first setting-up, our employees were very closely involved. Thereby, and by the reactions of the customers, they became more enthusiastic. Working in a nicely-decorated and colorful library turned out to be fun.

You’ve incorporated the Seats2meet Serendipity Machine into the project. What is it and how is it being used in the New Library?

The S2M Serendipity Machine makes it possible to set up a personal profile based on skills and knowledge. By this facility, visitors can sign up when they are present. In this way, their knowledge and skills are visible to others. This allows people to make contact with each other based on knowledge profiles. Using the Serendipity Machine is fairly new. We hope this way people will find it easier to interact and connect to each other. 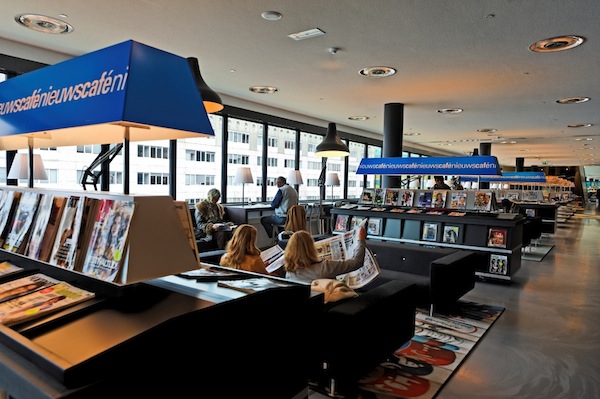 From the beginning, you involved the community to find out what they wanted from the library. What was the importance of taking this approach?

Were there any surprising insights gained from your crowdsourced approach to designing the library? What did you find that people most wanted? How were you able to accommodate their wishes?

Our customer groups turned out to be much more diverse than we thought. Our survey also showed that 70-75 percent of the customers did not visit the library with a specific title in mind. They came browsing. That insight [confirmed] that we wanted to entice the customer. Hence the retail techniques and the many places to read, sit down etc. Our goal was to extend their stay. 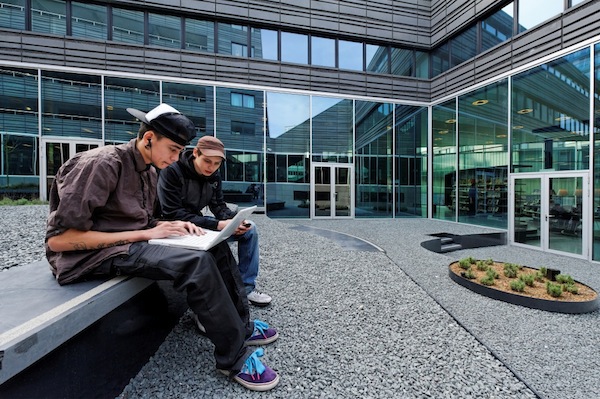 The New Library has become a vibrant, third space in the community. How did you go about creating not just a place that people would visit, but a place that they would stay and hang out in?

By also providing other services including snacks and drinks at our Newscafé; by an extensive program of events; by creating a reading garden; by offering gaming, exhibitions, and a piano that visitors are allowed to play on. The modern look and decor and the prominent place in the heart of the city also made it OK to be seen there as a young person.

There have been impressive results in terms of numbers including 100,000 visitors in the first two months of the library. Has that trend continued? Has the library met expectations of what it could be? What else would you like to see?

The number of visitors surpassed our expectations. We had 1,140,000 of them in 2013. But we must always work on improvements. New challenges, for example, are finding a way of creating a good supply of e-books, and how we can develop more digital services, including facilities to share knowledge.

What kind of transformation are you seeing in the ways people use the library as opposed to traditional libraries? Any examples of people utilizing the library in innovative ways that stand out?

In the past it was hit and run: customers went inside to lend a book, cd or dvd and were gone again. The most obvious change is that people, both members and non-members, are staying longer to meet each other, to search for books or other media, to have a cup of coffee, to consult, to study, to work, to attend activities etc. And everyone is exceptionally proud of the library. The library contributes to a better image of the new city Almere. This year Almere celebrates its 30-year existence as a municipality!

What impact has the New Library had on the wider community of Almere?

The new library is the largest and most successful cultural organisation of the city. The inhabitants of Almere and the town council are really proud of the library. The library contributes greatly to a better image of new town Almere. In general the image of new towns in the Netherlands is a negative one. [Editor's note: Criticism of new towns includes the fact that they lack history, culture and urban ammenities and the fact that they are generally designed and built top-down, with little input from the community.] From all over the Netherlands, and from abroad, people come to visit the library in Almere. And thus make them acquainted with the city. In this way the impact of the new library on the community of Almere would be comparable with the impact of the Guggenheim museum in the city of Bilbao. The new library is, of course, of a much more modest level though.

What role does the library play in bridging the digital divide and otherwise helping to lift up low-income communities?

Library visitors, members and non-members, have free use of PC's and wi-fi, thus enabling everyone to participate in a highly digitized society. We also organize workshops and consultation sessions where people can improve their basic computer knowledge. Sometimes these activities are free, sometimes we ask a very small fee. This applies not only to digital activities but also for all other activities that the new library offers. Members can also borrow e-books. This is a nationwide service of all Dutch libraries. We offer also special programs for functional illiteracy. Not only to improve — reading skills, but also to improve their digital skills.

What’s next for the New Library?

To prove that a physical public library has a right to exist in the future and will not disappear by increasing digitization and the Internet.