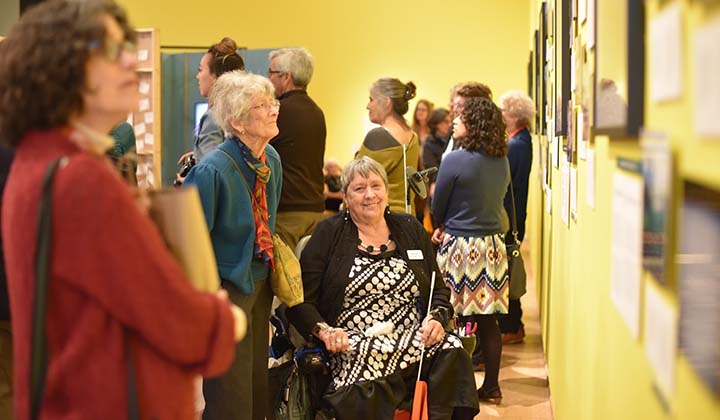 Image provided by Santa Cruz Museum of Art and History

A California museum’s new exhibit dedicated to exploring loneliness among senior citizens serves as an example of how to combat the very problem it highlights. By recruiting local seniors to design the exhibit, the museum fostered conversations and prompted participants to forge bonds that helped reduce the very social isolation they were working to illustrate.

The exhibit, which opened in April, grew out of a push by the Santa Cruz Museum of Art and History to raise awareness of the American epidemic of loneliness. More than one in five adults in the U.S. report feeling lonely, isolated, or lacking in companionship. This isolation can have an adverse impact on people’s physical health, especially among elderly people, who are often the hardest hit by social isolation. Lonely adults over 60 have been shown to have a 45% higher risk of death compared to more socially connected peers, and a 59% higher risk of mental and physical decline.

In Santa Cruz County, the problem has become extreme: 36% of surveyed elders in the area reported feeling lonely regularly. With these kinds of numbers in mind, museum leaders decided the best curators would be the experts on the problem: seniors themselves. They put out a call for interested community members and ended up with a committee of nearly 200 local seniors. Along with local nonprofits, volunteers and museum staff, the seniors designed a comprehensive, interactive exhibit called We’re Still Here, which will be on display at the museum until January of 2020.

It turned out that the process of designing the exhibit helped reduce social isolation. For the senior curators and their collaborators, the opportunity to work together to tell real stories of loneliness led to deep connections. “At one of the early [committee] meetings, these women were sitting together, and it came up that they were all recently widowed,” said Ashley Holmes, the museum’s marketing manager. “They became really close, because it was helpful for them to talk to others going through the same thing. One of them actually even did artwork for the exhibit about her experience.”

The exhibit includes artwork and photos by local artists and seniors, interactive activities, and even a dance portion, which all deal with different facets of social isolation among the elderly. Seniors are at a high risk for social isolation because they have usually stopped working and, in the West especially, regularly live alone. Seniors may be less mobile than other members of a community and are often on fixed incomes that don’t allow them to do “fun” activities like going to a restaurant or a movie.

One of the most compelling features in the display is an action wall with cards featuring 45 things people can do to address the problem. Action items range from donating an iPod to translating written materials for monolingual elders. “This can be a really difficult topic,” said Holmes. “It’s a heavy thing. The committee didn’t want people to walk away feeling depressed and disempowered, so they included a way for them to engage.”

Although it opened just over a month ago, the exhibit has already brought enthusiastic feedback from Santa Cruz community members. “Overall, the response has been overwhelmingly positive. People have seemed so touched,” said Holmes. “It is a really powerful exhibit, even if it is emotionally difficult.”

Five local artists collaborated with the seniors to create artwork for the exhibit, including Wes Modes, an audio artist who recorded the seniors’ stories for visitors to hear at the museum. “Working with these engaged and active seniors has been eye-opening,” said Modes. “I felt like I’d met friends from whom I had a lot to learn.”

The Museum plans to host a variety of events related to the exhibit held over the next several months, and information, blog posts and updates on the website for those who can’t make it in person to visit.