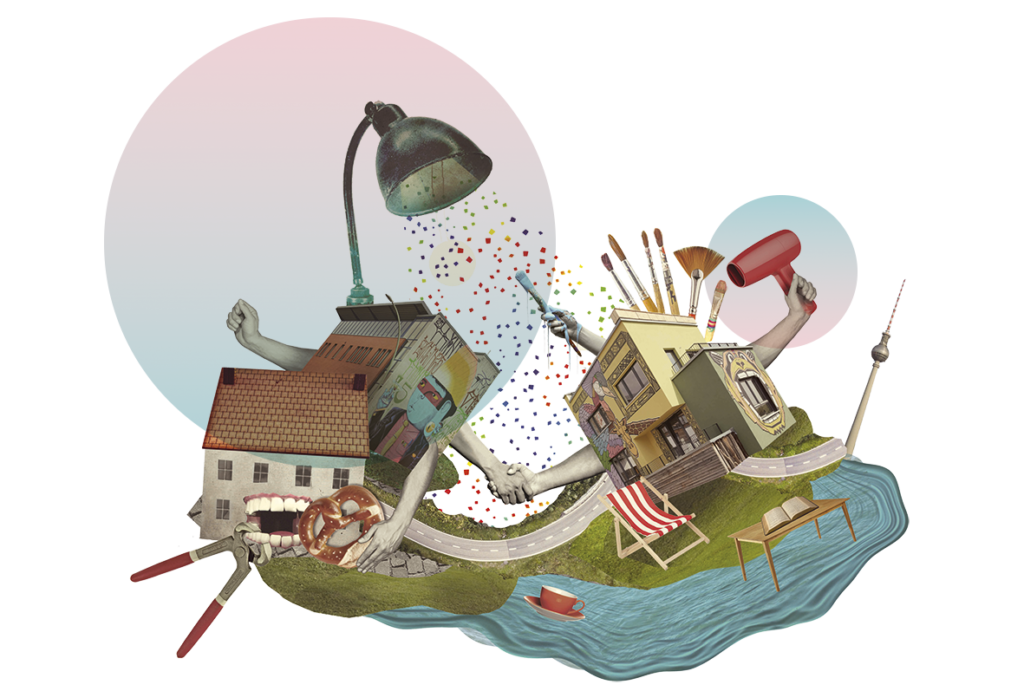 The year was 2007. The long-vacant spaces along the Spree River in the southern part of the Berlin district of Friedrichshain were populated by a range of intermediate cultural uses. Nightclubs such as Bar 25, YAAM, and Maria am Ostbahnhof flourished in former industrial buildings along the river banks predominantly owned by the city’s public works company.

But all that was about to change. These spaces were slated for a new investment project named MediaSpree, in which the entire neighborhood would be transformed into a glamorous new quarter for media and technology, lofts, and retail. It had been planned since the early years of Berlin’s reunification but various issues had delayed the project previously. As the plans were released and preparations made, coalitions were founded to protest the top-down nature of the planning and advocate for communities to give input on the design. They called for “Spreeufer für alle!” (Spree banks for everyone!). One result of these protests was a successful but non-binding popular referendum to the district which demanded that a 50m-wide (164ft) greenway along the banks remain unbuilt and publicly-accessible, that the overall building volume be reduced and reallocated, and that no high rises be part of the project. The second result was the founding of Holzmarkt Berlin, an experiment in low-density, citizen-led urban development.

The project, which is located at the former location of Bar 25 and was started by its former owners, initially faced a major challenge: the land that they wanted to continue using was sold by the city through a highest-bidder process. Benjamin Scheerbarth, a former project manager at Holzmarkt, who we spoke to for The Urban Commons Cookbook, said that process would usually be the end of the road for a creative and citizen-led project. Luckily, Holzmarkt was able to develop a concept and partner with the Swiss Abendrot Foundation, which bought the land and granted the organizers a long-term lease. It was through this coalition that they have been able to realize their vision for wooden architecture, low-density construction, and 100 percent unrestricted public access to the river bank.

Making this vision a reality has not been without stress, struggle, and the need for structure. One of the biggest challenges that the project faced after buying the land was mutual distrust between financial actors and the creative scene. To overcome this, Holzmarkt developed a framework of two cooperatives and one citizens’ association to be the legal entities in charge of management and development. These structures are co-dependent. The executive committee of one cooperative is part of the supervisory board of the other and vice versa. The cooperative structure was chosen to create a level playing field: each person has only one vote. In this way, a legal structure was chosen which the banks and the Abendrot Foundation would accept, but which also embodied the grassroots, democratic approach at the core of the project.

From its origin as a public movement, it has enjoyed continuing strong public support. Nowhere was this more obvious than at the groundbreaking. “Over the years, Holzmarkt has built up a big network of friends and supporters. On day one, there was no official groundbreaking; instead, everybody was invited to bring a plant and plant it here. More than a thousand people came!” said Scheerbarth.

To maintain authenticity and the experimental spirit of the project, the initiators chose unconventional approaches to development. Instead of trying to complete construction as soon as possible to offset the fixed costs such as rent, the initiators experimented with temporary uses as a way to pay the bills and create seed funding for incremental development. As Scheerbarth put it, “vacant land is an opportunity to create attractive spaces with little means,” which is a long tradition in Berlin’s subcultural scene.

During this phase, the project had to undergo an important transformation from their protest origins: organizers had to ask themselves not only what they were against but what they were in favor of, and make a proactive plan together with their network. But the intermediate and temporary aspects of their project have remained. “You need space, space to experiment, or even to move back one step and then move forward again. Never being finished is part of our identity, and this iterative process is fundamental to our work here,” Scheerbarth said.

A decade later, the space has been converted piece by piece into a lively urban village that is home to new ways of living and working, a large variety of alternative leisure and culture facilities, and free public access to the Spree. Holzmarkt has grown into a symbol for user-driven, bottom-up urban development in Berlin and internationally, drawing students, planners, and visitors from around the world. Much like the techno club Bar 25 before it, Holzmarkt has become a prime example of the creative, citizen-led projects which make the city so vibrant and are a draw for visitors and tourists alike.

Want to know more? Get your own copy of The Urban Commons Cookbook here.

This article is part of our series on the Urban Commons Cookbook.

Dr. Mary Dellenbaugh-Losse is an urban researcher, consultant, and author focusing on the development of equitable, co-produced cities. Her work spans a diverse range of topics, including urban commons, cultural

Dr. Mary Dellenbaugh-Losse is an urban researcher, consultant, and author focusing on the development of equitable, co-produced cities. Her work spans a diverse range of topics, including urban commons, cultural and creative industries, intermediate and adaptive reuse of vacant buildings, participation of underrepresented groups, and the political, symbolic, and normative aspects of architecture and urban planning.