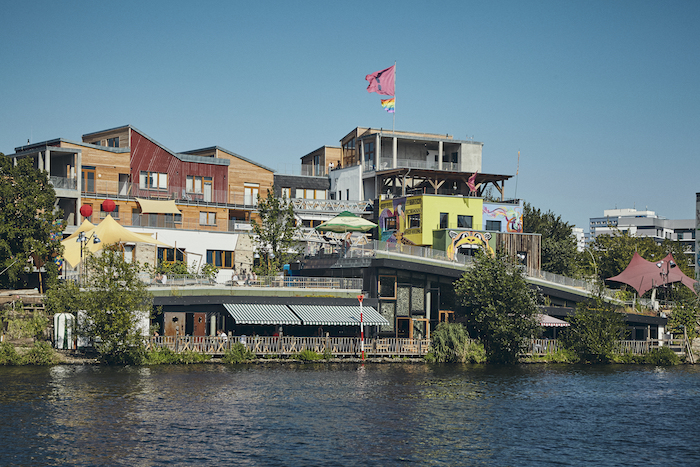 Creative placemaking — a concept that employs a specific strategy to infuse the arts and culture into a space — can be seen in different forms all around the world. There's Alphabet City cultural center (run by the City of Asylum nonprofit) in Pittsburgh, Pennsylvania, where you can soak in a cultural performance, browse through a bookstore, drink a glass of wine, and go back home to your apartment — all without leaving the premises. There's also the Livable Laneways Project in Vancouver, British Columbia, that "transform overlooked alleys or 'laneways' into vibrant outdoor gathering spaces with a stimulating mix of interventions," according to the Project for Public Spaces, a nonprofit based in New York City, New York, that helps people create vibrant public areas.

Now, one creative placemaking project along the waterfront in Berlin, Germany — near where the Berlin Wall once stood — has transformed into a robust urban village. The Holzmarkt urban village has a theater, dance club, bar and restaurant, bakery, music studio, and kindergarten. It was developed by a collective that started among a small group of friends and artists who met at the Bar25 dance club.

We got a chance to have a conversation with Ania Pilipenko, collective member and co-founder of Holzmarkt 25 Cooperative and Cooperative for Urban Creativity.

Kristine Wong: Tell me about what inspired the idea for Holzmarkt, and how it got off the ground.

Ania Pilipenko: The idea of Holzmarkt was basically born on the dance floor over 10 years ago at the legendary club Bar25. The club was a temporary place that was located exactly where Holzmarkt is now. The group of people who ran this place created a huge community of amazing creative people doing music and art. It was more than just a club – it was an alternative wonderland where people could create. During a party, one of the co-founders just said, "Wouldn't it be amazing and beautiful to have a space where all these people and artists could work and play together?" Then, when Bar25 had to close because the owner wanted to sell the place, we started to think about this idea further and were inspired by the idea of the village, because that is a symbol of a place where you have everything you need.

There was a core group of about seven to 10 of us who were working to make the idea a reality. We officially came up with the Holzmarkt concept in 2011, and started to build up our networks of support — supporters, partners and stakeholders, along with people in the city who could promote and push the concept. We wanted to buy the land in 2012 when it was up for sale, but did not have an investor at the time. Luckily, one of our partners brought us together with Swiss investors — a pension fund called Abendrot. They bought the land and we signed a 75-year lease and contract. 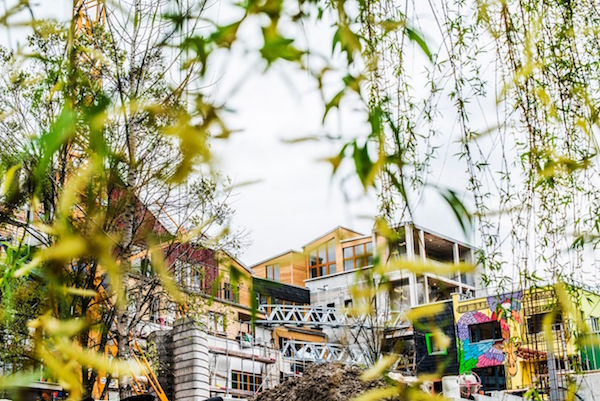 So in 2013, we had a huge celebration because we got the rights to develop the land. We invited over 6,000 people and asked people to bring flowers to plant on the land because it was an empty space. Thousands of people brought plants and flowers, and it was very emotional and encouraging to see how many people supported us. The people gave us suggestions on what they wanted to see in the space.

On May 1 of this year, we celebrated the Holzmarkt village opening after four years of construction. We built a kindergarten, a theater, a house for musicians and filmmakers, a bakery, a restaurant and a club.

It's incredible that you were able to turn your vision into a reality. As a cooperative, how were you able to bring in investors and raise enough money to pay for this?

From the beginning, we were trying to build an alternative investment model. For us it was important to find a way to collect money — since we didn't have money ourselves —without giving the creative rights to investors. We also wanted to secure the project from commercial interests.

So we formed two cooperative structures. One is called the Holzmarkt 25 Cooperative, and that group makes decisions on things like where a building like the theater will be located on the land, what the building will look like, and who will be someone who operates a business at Holzmarkt like the restaurant, for example. The second cooperative, called Cooperative for Urban Creativity, is focused on financial model and selling its shares.

The cooperative also has a general assembly to make decisions for things like investments, or how we organize ourselves — for example, who is the chairman, who is on our supervisory board.

The coop is cooperatively owned by 100 members. Each member of Holzmarkt has at least one share, and shares cost 25 euros each. We have sold about 200 shares. But no matter how many shares each member has, the person only gets one vote when we make decisions. With the 5 million euros we raised, we applied for credit from a bank in Germany that focuses on sustainable projects. We also got two million euros of funding from an investment bank in Berlin.

Our cooperative does not seek maximum profit. Instead, our goal is to cover the rate of inflation to get a sustainable return on investment. The members know that if Holzmarkt makes more money, it will be invested back into cultural and social projects — such as art or sustainability events. This is because culture and arts is what makes this place so interesting and attractive to people. Our goal is not to get rich for what we do here.

Creating that balance makes sense. But how does the cooperative run all the different spaces at Holzmarkt?

The Holzmarkt structure includes 15 companies, each focusing on different activities. But the cooperative itself is not responsible for all the activities on the land. We cofound the Holzmarkt companies. For example, one company is responsible for building, one is in charge of the energy supply, one for food and beverages, and one for media production and events. We also have one that runs the club and restaurant. Each one is there to organize its own activities, such as hiring people to pay the rent for the portion of the land they use, to pay the bills, and create the concept and content of their focus… basically the everyday decisions that need to be made. 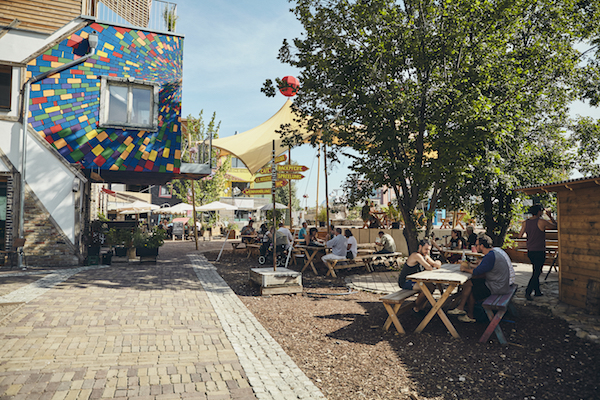 Holzmarkt market area on a sunny day, by Fanny Boehme

We also work with other initiatives like food trucks and pop-up restaurants run by other people, since we want to open the place for others. People can also apply to use the space in different ways. There are two criteria for applying. One is that it must be a unique idea. We don't want chain stores — we want people with interesting projects that you don't find on every corner. The second is that this project or business someone must contribute something to the Holzmarkt community. For example, a bakery might provide bread for our restaurant, or a yoga teacher might offer classes for children. If we decide that it is a good match, then we develop an agreement that includes details like the length of time they can do their project or activity at Holzmarkt.

What are Holzmarkt's plans for the future?

Holzmarkt is 18,000 sq. meters, and it will actually be made up of three different spaces when complete. The 6,000 sq. meter village is the first part to be developed. The next two parts we are working on are an alternative hotel/guest house, and an innovation center for scientists and entrepreneurs. 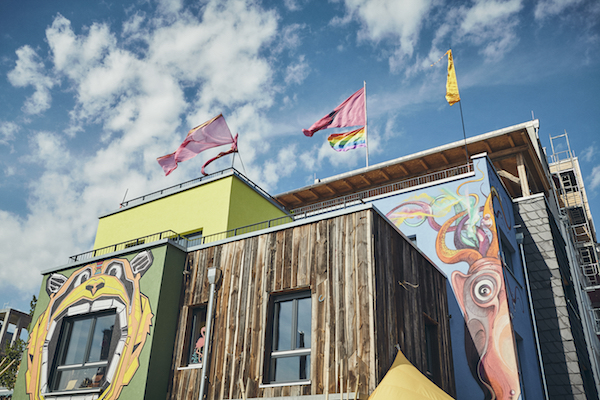 Kindergarten and flags of diversity at Holzmarkt, by Fanny Boehme

I know that you have only been open for a few months, but you've been talking to the people of Berlin about the idea for several years as well, and now people can come and enjoy the space for themselves. What sort of impacts do you think Holzmarkt could have on the community?

When I think the effects of having creative spaces for people to be able to express themselves, there are impacts on so many different levels. There is a meaningful effect of feeling like you are part of a human community, which might sound very easy. But on the other hand, being part of a place where people can exchange and experience different ideas — as well as be creative and be themselves — is very important. And for the children who are able to go to kindergarten at Holzmarkt and be part of that community, they will experience a completely new way of how people work and communicate together. For the city of Berlin, it's important because we are creating a new type of development in the city. That helps us create a better future for our children and ourselves. It makes us feel responsible for the city and our home. The relationship between people and places can only be established when people can influence what's going on there — and be part of a development.

Header image of Holzmarkt Village, viewed from the Spree river, by Fanny Boehme