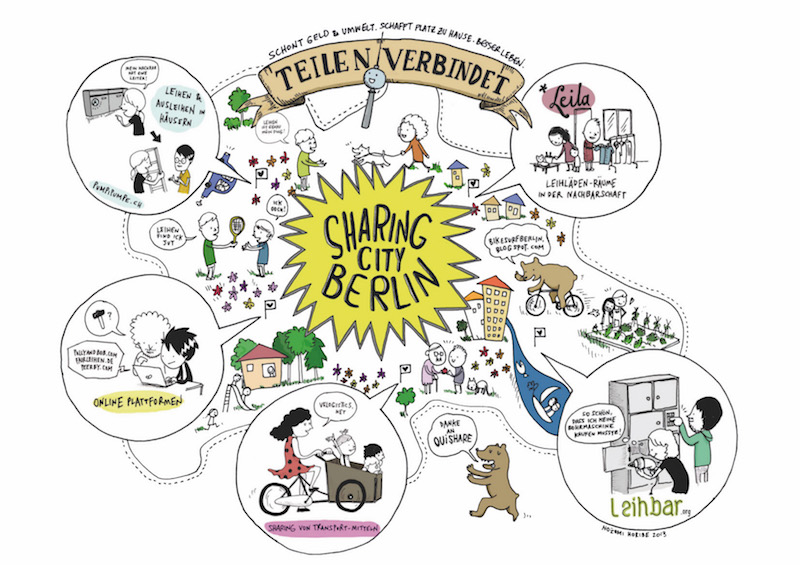 Germany's capital city Berlin has a thriving sharing and collaborative economy, thanks in part to think-and-do tank OuiShare. Since 2012, the group has facilitated a lively exchange of dialogue and action in many different formats, which has led to a strongly connected network of over 200 different projects and more than 1,000 individuals. In 2014, a group of sharing experts launched SharingBerlin and took the community building efforts to a whole new level. For two years, an exhibition and networking event called Share Fair (2014, 2015) brought together around 65 important players from the scene. After mapping Berlin's collaborative economy ecosystem, the group started to engage with local politicians and the government to create an official Sharing City. While this hasn't panned out yet, sharing projects continue to flourish in Berlin. Even without the official recognition of Berlin as a Sharing City, projects have been flourishing in the fields of food, mobility, money, and more.

Mundraub ("theft of food") is the largest online platform for the discovery of foraged food. It allows people to map locations, connect with others, and create actions to pick free fruits and vegetables. The group also organizes a harvest and offers plant care and other activities. Meanwhile, the organization Foodsharing offers tools for people to share leftover food. Another community food initiative is AufHaxe. The group's mission is to encourage "cooking and partying in your neighborhood." People are split into teams, and each team can choose to prepare an appetizer, a main dish, or a dessert, and invite another team over for one course. After each course, the teams split up and move to another team member's home for the next course. At the end of the day, each team member eats three courses (each one at a different house), connects with 12 people, and participates in a huge party with all the members. Some of the food prepared at these cooking events come from FoodAssembly, a platform that connects organic farmers and buyers at local markets. 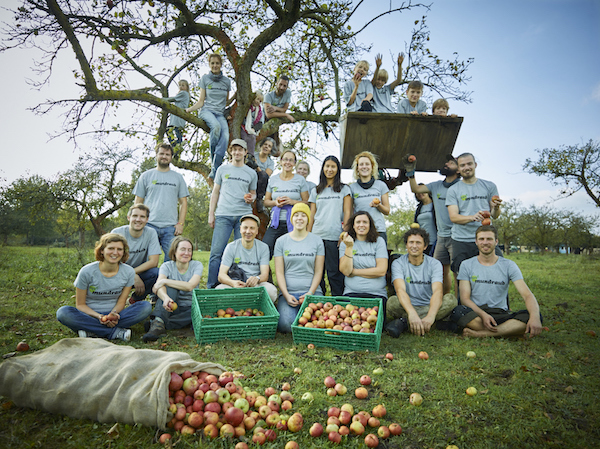 The P2P cargo bike-sharing platform Velogistics is a community treasure. It facilitates a commons-based culture of sustainability and DIY by connecting borrowers and lenders who want to share cargo bikes, usually for free. The founders of the platform also maintain Werkstatt Lastenrad ("workshop cargo bike"), a site with information on DIY building and repairing of cargo bikes. Workshops like Regenbogenfabrik ("rainbow factory") and local bike stores offer donation-based repair sets and knowledge for self-service. If you need to borrow a bike, you can choose between the free bike sharing group BikeSurf or other bike rentals like Call a Bike and nextbike. 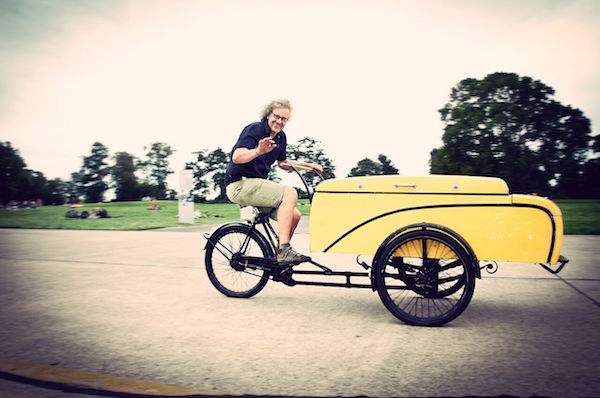 Photo of a cargo bike ride along the old airfield of Tempelhofer Feld in Berlin, courtesy of Andrea Künstle/velogistics.net

The LEIHBAR (meaning "rentable") runs a library of things, via a digital platform. It offers a network of pickup stations (mainly 24/7 convenience stores, community gardens) and provides users  convenient and time-saving access to items of daily use. Drills, projectors, tents, and many other items can be rented via the website for a small fee, making the user experience comparable to professional car sharing. The project's social impact lies in its system design for circular economy. Partnering with tool producers (ex. Bosch), LEIHBAR convinces sales-orientated companies of circular business models and incentivizes longer product life times, reparability, and modular design. The longer the products last and the better they can be repaired, the lesser the toll on the environment. 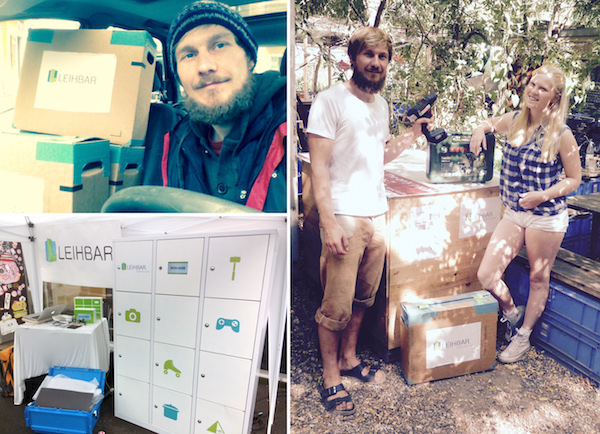 Photo of item delivery, lending locker, and pick-up station at an urban garden, courtesy of LEIHBAR

The community-based sharing store concept LEILA has already become well-known worldwide and has inspired at least 10 other cities to launch similar projects. Members of the community donate and share items that can be borrowed by others. To ease drop-off and pick-up, the store established a reliable infrastructure run by its members. Users who cannot find a desired item via this channel still have a chance to browse the local P2P platform Fairleihen.

At the cooperative CZY WRK, digital workers, freelancers, and artists are welcome to share mutual work assignments, profits, and certain securities to overcome down-periods. The group believes strengthening its network will benefit all participating individuals.

Closely entangled with CZY WRK is the coworking space SUPERMARKT, which is recognized as one of the key players of the German platform cooperative movement. The group's conferences and workshops like "Co-op Futures" (June 2017), "Platform Co-ops — Start your own!" (Dec. 2016), and "Community Value" (Sept. 2016) regularly bring together local and international influencers. Another flagship in the Berlin coworking scene is Betahaus (meaning "beta house"). Established in 2009, it offers various rooms, event spaces, and woodworking facilities, where a lively maker community found its origins. Still quite new, the Agora community's spin-off CRCL hosts a coworking space and a community garden.

The nonprofit organization Mein Grundeinkommen ("my universal basic income") raffles off unconditional basic incomes of 1.000 €/month. Each person who wins receives a monthly transfer for the duration of one year, so 12.000 € in total. The team is interested in finding out what happens, if a society has the financial resources to focus on life-goals rather than on just basic needs. As of now the project has fulfilled the dreams of 105 universal basic income winners who are eating more healthy food, able to afford education, travel, and save. 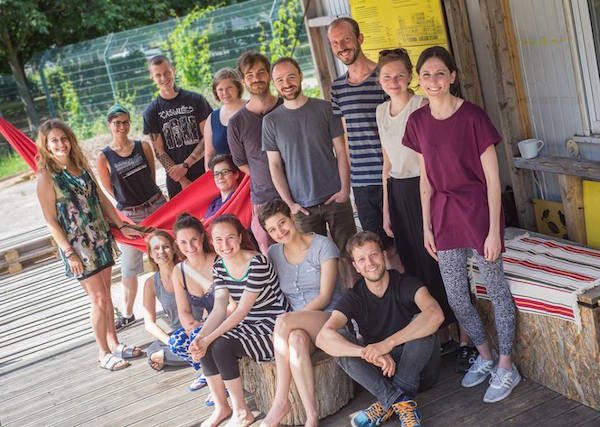 Photo of the Mein Grundeinkommen team, courtesy of Christian Stollwerk

Das Baumhaus ("The treehouse") is an open socio-cultural project connecting, inspiring, and empowering its members and local changemakers working for transition to sustainability. The project space was crowdfunded and collaboratively developed by more than 300 people of the community. Nowadays the team fosters the community with regular cooking sessions, concerts, workshops, and other events like the yearly Emergent Berlin gathering. 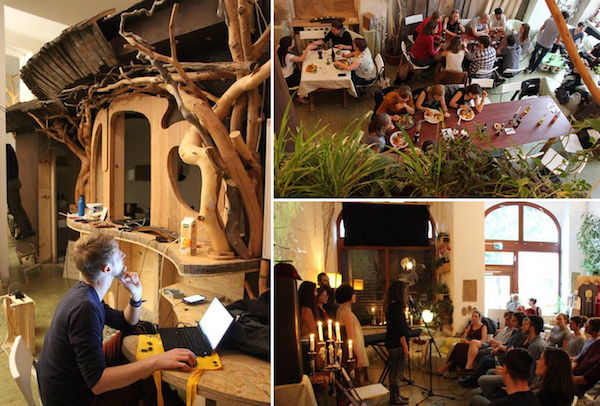 Photos of the space, community dinner, and concert, courtesy of Das Baumhaus

Another excellent example for a thriving community in Berlin is Prinzessinnengarten ("princess garden"). After occupying some wasteland in the center of the city in 2009, the group — along with friends, activists, and neighbors — cleared away rubbish, built transportable organic vegetable plots, and reaped the first fruits of their labor. Thanks to the openness and entrepreneurial skills of the team, the urban garden gives room to a self-managed, cozy restaurant underneath the trees. The restaurant is supplied by vegetables and herbs grown in the garden. There's also a nursery, beekeeping area, repair workshops, flea markets, and an access point to pick up LEIHBAR items. It also features several spin-offs like Material Mafia, a recycling project for construction material.

Driven by its own bottom-up community building over the last couple of years, Jolocom focuses on establishing private key applications that allow users to connect to online networks and manage private data to be shared with the platform at the same time. The principle of "own your data" is maintained on a blockchain. Similarly Resonate is a blockchain-based service for streaming music that is cooperatively owned by the people who make it great: musicians, fans, and developers. Both examples show how network value can be distributed among the community to generate new benefits like privacy, cost-effective access for users, and fair payments for producers. 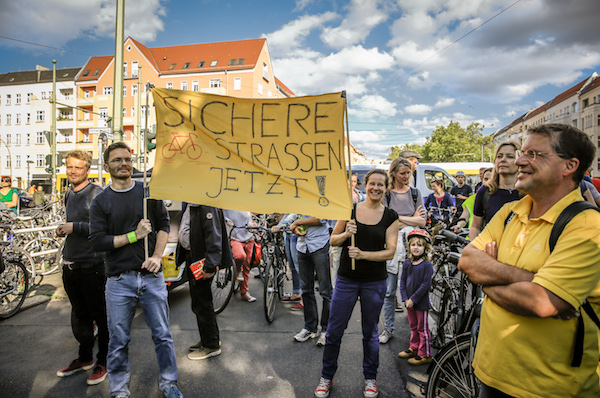 The list of interesting projects could go on and on, because the collaborative ecosystem draws its power from people who question the status quo. This practice is not just common for the sharing movement, but for general bottom-up cases in Berlin. It explains why Volksentscheid Fahrrad (meaning "referendum bicycle"), the civil society's answer to the mobility and bicycle policy of the city administration, has been very successful. The campaign has received 100,000 signatures from bicycle enthusiasts who are demanding better bicycle lanes, bicycle parking spaces, and car-free zones. One step behind, but promising as well is the movement BürgerEnergie Berlin ("civil energy Berlin") reaching out to purchase the Berlin electricity grid. 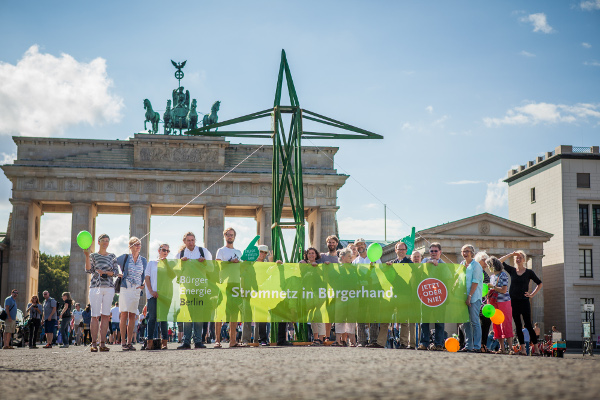 Please visit Berlin and experience our local collaborative economy. I'll be happy to guide you through the ecosystem.

Andreas Arnold is a Berlin-based entrepreneur who works in the fields of social impact, sharing, collaborative & circular economy (CEO of Leihbar, former Ouishare connector), as well as

Andreas Arnold is a Berlin-based entrepreneur who works in the fields of social impact, sharing, collaborative & circular economy (CEO of Leihbar, former Ouishare connector), as well as platform coops (Business Development at RChain Europe), blockchain, decentralized governance and decentralized, autonomous organizations (Contributor to DAOstack “Genesis Alpha”) since graduating with a Diploma in “Industrial Engineering and Management" in 2012. As a business consultant Andreas offers professional services (e.g. concept development, project management) and introduces different stakeholders to each other and potential matches. Additionally he supports startups with their business development; especially in regards to building marketplaces due to the expertise he gained translating the book “The Lean Marketplace" for the German audience.