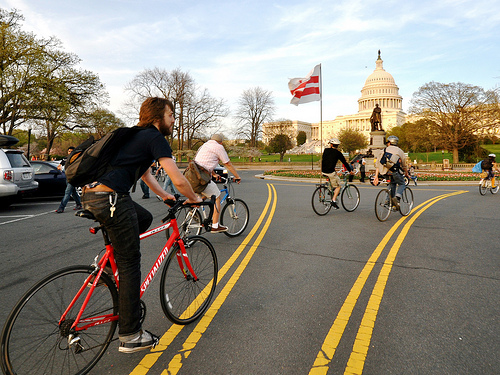 A platoon of cyclists traded their racing jerseys and lyrca shorts for suits as they fanned out across Capitol Hill to convince Senators and Representatives that biking is a sensible, healthy, economical, energy-efficient, and patriotic way to get around American towns.

Meeting members of Congress was the chief agenda on the final day of the 11th annual National Bike Summit when bike advocates from around the country and representatives of the bicycle industry gathered in Washington, D.C. to rally support for continued federal funding of bikeways and other projects to boost the safety and convenience of traveling on two wheels.

Enthusiastic cheers opened the meeting when Secretary of Transportation Ray LaHood — a Republican — declared, “A livable and sustainable city is one that has neighborhoods that are walker-friendly, biker-friendly, and transit-friendly.”

Some Republicans, however, worried the crowd — the Tea Party and others now in control of the U.S. House whose zeal for cutting the non-military budget might include slashing bike investments to almost nothing. This would imperil Safe Routes to Schools (which makes it easier for kids to walk and bike) and provisions in the transportation bill that direct small sums of money to local projects like bikeways.

These programs actually represent a tremendous bargain for taxpayers: a scant 1.5 percent of surface transportation expenditures is devoted to biking and walking, which account for 12 percent of all trips in the U.S. 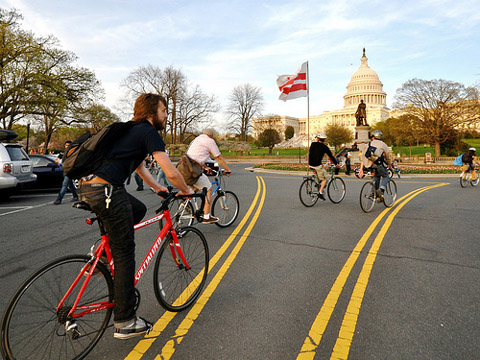 Indeed, America has seen a 60 percent rise in biking since the federal funding of biking and walking projects (called “transportation enhancements” in Washington lingo) began in the 1990s. That number represents hope that we can lower obesity rates, reign in health care costs, improve the sense of community in our neighborhoods, and reduce dependence on foreign oil. That last matter is becoming more urgent as gas prices speed past $3.50 for the second time in three years.

Indeed, investing money on bike lanes in our cities might be the most cost-effective way to reduce traffic congestion since they cost only $125,000 per mile compared to $40 million to $100 million per mile of a new lane of urban freeway, according to former House transportation committee chair Jim Oberstar.

The Bike Summit is a "bike-partisan" event, say its leaders, which is why bike activists made a particular point of visiting newly elected Republicans in the House of Representatives on their rounds of Capitol Hill. Bike shop owners and bike industry leaders took the lead in these discussions, driving home the point that bicycles are not only a good transportation idea, but a growing part of the economy.

And folks came back from the meetings optimistic about what they heard; nearly all Republicans seem to support biking in general terms, and no legislation has yet been introduced  to eliminate or disproportionately strip bicycle funding.

No one knows for sure what will happen when debate begins on a new six-year transportation bill. But I saw one more encouraging sign as I stepped out of my legislator’s offices into a rainstorm — a pedicab (bike taxi), into which I promptly jumped since my umbrella was leaking.

As we passed the Capitol, Richard — my driver and a student at Georgetown University — pointed out the new bike lanes on East Capitol Street, which he said were not there at the time of last year’s bike summit. I took that as a good omen for the future of biking in American cities.

To join efforts to promote biking, see People for Bikes.