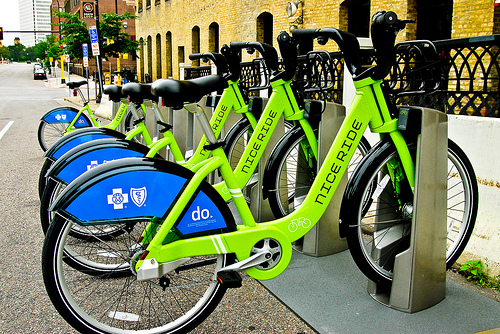 As we say here in Minneapolis:  “You know it’s spring when you see robins in the trees—and you know winter’s back when you stop seeing public bikes on the street.”

Well that’s not what we say right now, but it could become local wisdom in the future thanks to the success of the Nice Ride bike-sharing system .

700 bikes to share hit the streets in June at 65 stations, and they were taken for more than 100,000 rides until put away for the winter in mid-November.  1300 people signed up for an annual membership and 30,000 signed up for a $5 daily pass with the swipe of a credit card.

Nice Ride, the non-profit organization running the Minneapolis bike share program, had budgeted for the loss of 10 percent of its bikes due to theft or vandalism, which is one reason why it wound up in the black in its first year, even while selling fewer annual memberships than anticipated.

The slick-looking green bikes will be back next spring, alongside the robins, with a planned expansion of service to more neighborhoods in Minneapolis and possibly St. Paul. An outreach program to low-income communities is also in the works, according to Nice Ride Executive Director Bill Dossett.  “We really want to…give them the same access to bikes that other people have.”

Nice Ride was the largest public bike program in the U.S. when it was launched. Washington D.C. debuted the Capital Bikeshare system in September with 400 bikes that will grow to 1100 by the end of the year.  Denver debuted a system in April with 425 bikes, which was criticized by the Republican governor candidate Tom Maes as an sinister attempt at “converting Denver into a United Nations community.”  (He got only 11 percent of the vote.)

The systems in all three cities were modeled on Montreal, where the Bixi bikeshare program launched in 2009 now features 3000 bikes at 300 stations.

New York City is looking at plans for 30,000 public bikes—a bike sharing system that would surpass even Paris, which fields about 20,000 bikes.

The popular systems in European cities such as Paris, Lyon and Barcelona are run by billboard companies, which provide the service in exchange for permission to erect billboards at prime locations around the cities. This arrangement has prompted widespread criticism that the companies not dedicated to providing good service.  That may account for the large number of broken, stolen, vandalized public bikes in Paris.  But the system has still been a unqualified success, which has boosted the number of bicyclists across the city.

A different model was pioneered in Minneapolis with Nice Ride operating as a non-profit organization. The initial start up costs were covered by a $1 million grant from Blue Cross/Blue Shield of Minnesota (which invests in heavily in healthy living projects from a fund created from a state lawsuit against tobacco companies) and $1.75 million from Bike/Walk Twin Cities (a federally funded pilot project to promote walking and biking as a transportation alternative).