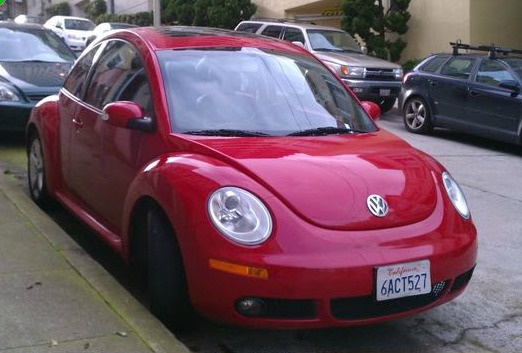 Sandy and her husband are conscious car owners. They know personal vehicles account for a large portion of the carbon emissions in America, so they bought a bright red, used Volkswagen Beetle TDI that runs on biodiesel and dubbed it "Meatball."

When purchasing their second car, they went a step further and bought a Smart Car that made Meatball look like a semi truck. But making payments on two cars was hard on their budget. Refinancing one of the loans helped lighten the load, but they still needed a way to offset the high cost of owning two vehicles in a time when gas is almost $4 a gallon.

Sandy and her husband like to try new things, and they like to be green, so when they heard about Getaround, a peer-to-peer car sharing service in California, they decided to put Meatball on the market and see what would happen.

Within a few months, Sandy and her husband were making enough by sharing Meatball with others in their community that they no longer had to worry about selling their beloved red Beetle.

"I don't drive much, so we didn't want to keep two cars unless we could lower the cost and impact of doing so," said Sandy. "I believe July was the first month in which we cleared enough to cover both car payments. Since then, we've made $350 to $499 a month."

Many peer-to-peer services have tried to position their platforms as a way to make money with unused stuff, whether it's renting out a spare room on Airbnb or offering up your bell bottom jeans on ThreadUP.

And the numbers are convincing. The Collaborative Fund's boasts that a New Yorker renting their space on AirBnB could add $21,000 to their annual income, while renting out video games or a system on Rentoid could earn gamers an extra $200.

But, as Shareable's Paul Davis recently pointed out, this isn't the biggest benefit of collaborative consumption, and marketing it this way might be slightly missing the point.

"The sharing economy can make users some needed cash, and in an economy like this, you can’t ignore the potential impact of that. But when collaborative consumption frames relationships as ways to make money, we’re back to square one. Instead of corporations commodifying relationships, we’ll be doing the commodifying—small micro-corporate nodes in a retrofitted yet fundamentally flawed system."

With the price of…everything going up, however, it's hard to ignore a potential revenue stream, especially one that's sitting right outside your front door. And while Getaround became a way for Sandy to justify keeping her second car, that isn't how most car sharing members use the extra cash.

In fact, research shows that in most cases, joining a car sharing service actually helps reduce the number of vehicles on the road by eliminating the need to own a car for many participants.

But two idle cars are definitely worse than one, so if you're interested in just how Sandy and Meatball became so successful, here are some tips about sharing your car:

Know Your Vehicle (and make sure renters know the rules

Tell your renters about any quirks that are unique to your car (like how Meatball can only take diesel or biodiesel) and be sure to check the vehicle between rentals, whenever possible, to track any damage, maintenance needs, mileage, lost possessions, etc.

If your car uses street parking, and your home base is an area in which it's difficult to park, make sure renters budget enough time in their rental period and schedule for re-parking the car. "For us, having renters text us the car's location and any parking restrictions, once they park it, has worked well," said Sandy.

Don't Be Afraid To Take A Chance On People

Getaround, like many sharing services, has a built-in system for reviewing and rating its users. But this only helps choose qualified renters or rentees when the system has been in use for a while. Since Getaround is only deployed in select areas right now, Sandy found that sticking to renters that had lots of positive feedback from previous rental experiences limited her chances of sharing Meatball.

"I decided that as long as potential renters have passed Getaround's requirements to use the service, I'm willing to rent the Meatball to them at least once," said Sandy. " I think our 'Leap of Faith' paid off; we've had few problems with renters: mostly parking tickets, a fact of life in San Francisco, which renters have been generally quick to pay."

Most of all, embrace the unique experience of sharing your car with strangers

"The biggest benefit for me, besides making a little extra money and helping to reduce people's need to buy more cars, has been the interesting people I've met, when they rent our car," said Sandy.

"Meatball has been to a wedding in LA and taken couples to the Redwoods. It took a kid and his family to a picnic at Chrissy Field for his birthday, and a woman who was visiting from Missouri used it see the Bay Area with her daughter. One fellow who rented Meatball had a friend who always wanted to ride in a beetle, so he rented Meatball to take her around for a birthday surprise.

"We also have a few regulars who use Meatball occasionally, for work. I've been tempted to leave a journal in the car so people can write whatever they like in it about their travels in Meatball. I think sometimes my car has a more exciting life than I do."