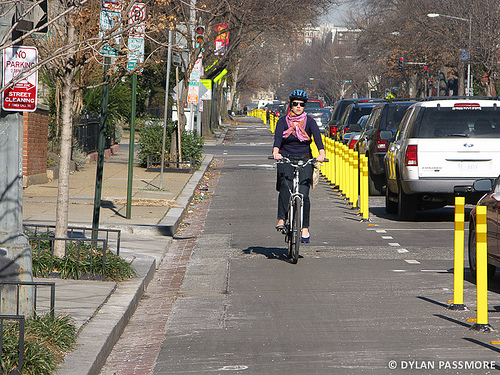 Funding for bicycle and pedestrian improvements is under threat in the coming months from politicians who want to shove transportation policies back to the 1950s, when cars were the only way to go. Oklahoma Senator Tom Coburn and others have targeted any money that goes to non-motorized transportation.

Called by the misleading name “transportation enhancements (since when is saving lives an enhancement?), programs to make biking and walking safer for everyone are one of the smartest investments ever to come out of Washington. Any politician of either party wanting to eliminate them ought to open the pages of the venerable conservative magazine The Economist, which last week made a strong case for continuing to build bike lanes and pedestrian-friendly street designs .

Not usually an advocate for expanding government programs, The Economist bluntly states: “Dying while cycling is three to five times more likely in America than in Denmark, Germany or the Netherlands. The reason, according to the 168-year-old magazine, is that Northern European bikers enjoy the safety of bike lanes separated from moving traffic and other modern measures to protect riders.

Another factor cited by the magazine is traffic calming, a toolkit of new engineering approaches that remind motorists not to speed. And we know beyond a doubt that speed kills. The Economist points to a British government study showing that vehicles traveling 40 miles-per-hour kill pedestrians 85 percent of the time. At 30 mph, pedestrians die 45 percent of the time, and at 19 miles per hour (the speed limit on many residential streets in Europe), fatalities occur 5 percent of the time.

Many American cities are gradually adopting these kind of bike and pedestrian safety measures—bringing common sense and back to urban transportation. But this progress will be stopped in its tracks if Congress slashes dedicated bike and pedestrian funding back to zero.

Transportation enhancements have been part of federal transportation policy since 1991, when George H.W. Bush signed them into law. Both Bill Clinton and George W. Bush carried on these policies.

Eliminating enhancements is not only dangerous for anyone traveling American streets (motorists are also hurt and shaken in pedestrian collisions too), but also for the goal of reducing government deficits.

Bike and pedestrians programs represent a 1.5 percent sliver of surface transportation spending, yet account for more than 10 percent of all trips Americans make each day.

So it’s smart to invest in bike lanes, traffic calming and other programs to make two-wheel and two-foot travel safer for Americans. This could save billions in future roadway projects, since a state of the art bike lane take cars off the street at a fraction of the cost ($125,000 per mile) compared to a new lane of urban freeway ($50 million).

Contact your senators if you want to keep funding for bikers and pedestrians.