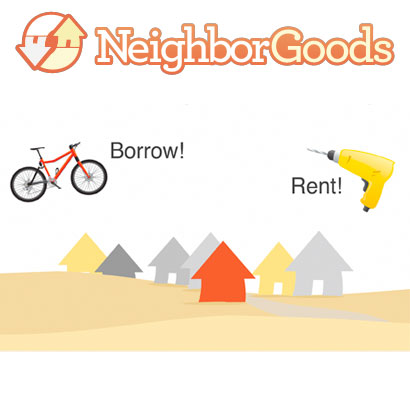 Today, general item sharing platform Neighborgoods announced that it will close July 31, 2012 after a three year attempt to get traction (update: Neighborgoods is becoming Favortree). It’s an open secret in the sharing community that neighborhood-scale general item sharing is a tough play. In fact, this was the subject of June's Collaborative Chats, "Stuff-Sharing: Where's the Traction?" which just happened to feature tireless Neighborgoods founder, Micki Krimmel, among others.

I know from experience how tough the most commonsense play in sharing is. Neighbors should want to share their everyday stuff and save money, right? Does everyone in the 'hood need their own lawnmower, ladder, and leaf blower? No, but of the dozens of neighborhood sharing sites launched since I co-founded Shareable in 2009, I only know one with traction – Zilok in France, and I’ve heard this is on the strength of their peer-to-peer real estate and car rental transactions.

My experience also includes working on two failed sharing sites, Moogul.com and Divvy.com. The former launched in 2004. It was tough then, and it’s still tough today even after the breakout of Airbnb and their ilk have made sharing resources a familiar idea.

What makes it so tough?

First, there’s little financial incentive to share low-value items like the proverbial drill. The success of Airbnb and peer-to-peer car sharing tell the story from a different angle – plays in high-value asset classes have gotten the most traction by far. Secondly, while it’s a nice idea to share with neighbors, many people don’t know them or want to know them. Counter-intuitively, the most successful sharing marketplaces connect strangers. Thirdly, getting critical mass in a two-sided marketplace on a range of items in a single neighborhood or city is incredibly tough. It’s much easier to build two-sided marketplaces in a single, high-value asset class on a national or international scale a la Airbnb. Lastly, it’s tough because it takes time. Craigslist took almost a decade before it took off internationally.

Does this mean neighborhood sharing is a lost cause? No, because there’s a bunch of approaches that haven’t been tried yet. Below are five ideas on how to get neighbors to share their stuff:

The Tupperware of Sharing. This is the distributed rental shop model. Imagine running a rental shop out of your garage offering a limited selection of proven rental items like carpet steam cleaners with the support of a national brand and website. Now imagine an international network of such neighborhood micro-businesses. That’s the Tupperware model of neighborhood sharing.

Retail as a Gateway to Sharing. This scenario treats the point of purchase at major retailers as a gateway to collaborative marketplaces that manage products through multiple owners and users. Imagine that when you make a purchase, your item is automatically listed in an inventory with all your past purchases. Imagine that you can post any item from this inventory to a peer-to-peer marketplace with one click. Possible? Yes. Probable? Unfortunately not. Check here for why.

Sharing Meets Community Organizing. This scenario takes a site like Neighborgoods and supports it with a team of community organizers that helps form sharing groups neighborhood by neighborhood. This isn’t scalable, but neither is building real relationships. I wish someone would apply this Saul Alinsky-style community organizing to neighborhood sharing. I’ve heard Yerdle may try this soon, a worthy experiment in my book.

Local Governments Champion Sharing. Local governments could help kick-start local, voluntary sharing. Local efforts are best led by citizens, but local government can play a role in facilitation, permits for sharing events, use of idle government real estate for exchanges, establishing sharing-friendly policies, and getting the word out. Governments, whether big or small, can create the conditions that make the choice to share a viable one. Everyone should be free to share. San Francisco's Sharing Economy Working Group maybe a start at this.

The bottom line is that there’s probably no technology shortcut to making sharing a part of everyday life in your ‘hood. It’ll likely take a lot of relationship building and time.

What are your ideas to get neighbors sharing everyday stuff?