Fight for Franny: A Small Dog with a Big Story - Shareable
Skip to content 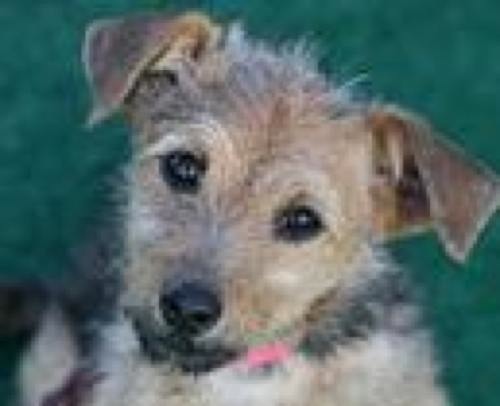 On Friday, February 18, an eleven month-old terrier-mix named Franny was out in her Los Angeles yard, doing what dogs do best, peeing, when a pit bull ran out of a neighboring house and took a giant bite out of her side. The puppy’s stomach was torn open so widely that her owner, Lindsay, had to hold her insides in her hands as they rushed to the hospital. Franny went straight into surgery where eight inches of her colon had to be removed. She lost so much blood that her gums turned white. Now, three days later, she remains in a critical condition. 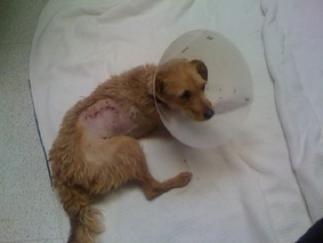 This story might have stayed right there, in the realm of personal tragedy for Lindsay, and, by extension, those who care about her and her dog. But it is because of the turn that this story takes that I decided to share it with the Shareable community.

On Sunday, two days after the attack occurred, Lindsay’s roommate, Ellen, sent out an email to Lindsay’s friends, myself included. Her email recounted the horrible story, but it was also a call for help. See, Lindsay is a writing student working to complete her Master of Fine Arts. She is living off of student loans.

As Franny was rushed off to surgery and the practical reality of the situation started to crystallize, Lindsay realized two things: one, that she had to do everything in her power to save Franny, and two, that she could not afford to do so. Giving Franny the care she needed would cost thousands of dollars, money that Lindsay did not have. She cleaned out her savings, but they only went so far. And so, in her email, Ellen asked Lindsay’s friends to consider sending anything they could spare toward saving Franny, even a dollar was valuable and appreciated.

The news of Franny’s story moved me in a way I cannot quite explain. I have never met Franny, Lindsay adopted her after moving from New York to Los Angeles a few months back. But I had seen pictures of her, and I had heard her story. Because, you see, this is not the first time that Franny’s life has been in danger.

She was dumped in a trashcan and left to die when she was just a baby. She was found, taken to an animal shelter, and it was there that Lindsay adopted her, only months ago. There was something about Franny’s two battles for her life that made me sit with that mass email for quite some time, not delete it the way I do most inquiring messages of that nature, but rather pull out a pen and write a check.

I posted a notice on my Facebook wall about Franny and, within minutes received several notes from people who had never met Franny OR Lindsay, but who wanted to help. Overwhelmed with similar inquiries, Lindsay’s roommate Ellen set up a blog with an easy "donate" function. More people shared the blog on Facebook. Comments started to roll in, as did donations.

After having been in existence for a mere seven hours, over $1,500 dollars had been donated to Franny’s blog. By Monday morning, the number had reached $2,000 dollars. It is currently at a little over $2,300.

I wanted to share Franny’s story because it helped me believe in a shareable future in a new and visceral way; it showed me how community and empathy can be created in a matter of hours, even among people who don’t know each other. I think Franny’s story is especially resonant because of the timing. At this moment, the GOP is waging a war against women and scheming to destroy Planned Parenthood. At this moment, the level of political debate going on in Washington and in the media is so uninformed and spiteful that it’s easy to feel nothing but disgust and despair. (The sheer ignorance of using anti-abortion rhetoric to shut down national programs that arguably do the most to PREVENT abortion by providing family planning, health services, and birth control—federal money does NOT pay for actual abortion procedures, so it's a moot point— is just too much!)

And so, Franny’s story, in all its rawnesss, became not simply a tragedy, but a symbol of hope. Seeing how much support Lindsay and Franny have already received makes me hopeful in a time when hate and selfishness seem the prevailing, hopeless norm. Theirs is a story of generosity, and of resilience. On Franny’s blog, Ellen writes: “The fact that Franny was abandoned and rescued probably contributes to her ability to fight for her life.  After the initial attack, Franny ran away to die alone, as dogs do, with all of her little guts hanging out of her. But too many people wanted her to fight to keep living, and so she decided she'd better do just that.” 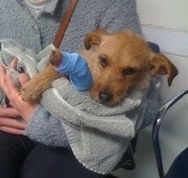 More than the courage of one pup, Franny's story shows the goodness existing all around us that is just waiting to swell up and show itself, and the fact that though the world is full of strangers, those strangers are friends too. A very little pup has proved a very great deal. Now, more than ever, it feels important to see friends as well as perfect strangers come together to embody what sharing is ultimately all about: offering that hand to your neighbor when they’re finding it hard to stand up.

Many have already rallied to help save this small puppy’s life. Won’t you join them? Do so here.