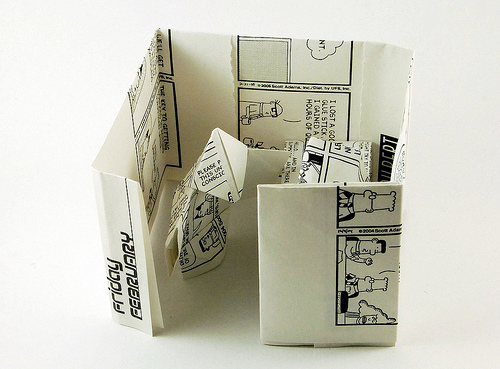 Workspaces and offices have long lived under the shadow and influence of the institutional cubicle design: people worked in isolation, boxed-in by their pre-fab walls, or toiled in individual silos with little interaction with fellow workers. This formulaic layout, the bane of workers around the world, has seen longstanding calls to be redesigned or scrapped all together. Even its designer Robert Propst, regretting its popularity, eventually dubbed it a “monolithic insanity”.

In today's collaborative consumption economy envisioned by Rachel Bostman and others, coworking spaces have been touted as the revolutionary work setting to spark innovation and the creative exchange of ideas. Much of this is due to how coworking spaces have shown great innovation in re-thinking the physical world of work for independent workers, freelancers, small businesses and organizations, promoting the principles of  openness, accessibility, collaboration, and community.

When shopping for a coworking space, prospective members want to look for a place that provides the creative environment where they can thrive. Several critical factors for discerning prospective members include the amenities and facilities offered, as well as the quality of the programming and diversity of the community.

Less talked about but just as important is how a space is physically structured and designed.

Do the workspaces look like cubicle clones? Are the spaces well illuminated by good lighting? Are there open spaces for people to congregate and chat? Is the color scheme warm and inviting?

Worrying about aesthetic concerns like wall decor may seem trivial but the right balance of form and function has an impact on how you work and interact with others. Design and layout of a workspace matter. Why? Because it reflects how much a coworking facility values collaboration, which is ultimately what makes coworking spaces great places to work— and an attractive alternative to your windowless basement home office or cramped corner at the local coffee shop.

This means that making the best choice about a space for your business or organization also depends on deciding whether it has the right mix of function and aesthetics. For example, many coworking spaces offer quirky and unique layouts to maximize the entrepreneurial, collaborative buzz so many indie workers want, but also provide members the necessary quiet zones, such as private rooms or booths where members can pop in to make a private phone call or have a quiet chat with colleagues.

Whether or not there is a feng shui to working, here are five questions you should consider when it comes to selecting your coworking space:

1. Does the space invite collaboration?

Does the layout encourage members to bump into each other in pleasant and unobtrusive ways? Or, are workers compartmentalized in their individual desks, working next to each other and not talking. Alex Hillman explains how these nuances affect the group dynamic in Indy Hall, a coworking space in Philadelphia: “All of our workspace clusters are a mix of full-time desks and flex desks. The purpose of that is to make sure that if you’re coming in as a new person, or a person for the day, you’re not going to be sitting by yourself, because you could do that at home or in a café…And so we design these opportunities for people to bump into each other and increase the possibility for something interesting to happen.”

2. Does the space reinvent ‘the office’ in creative ways?

pariSoma Innovation Loft in San Francisco has a remarkable, airy loft-like feel with a split-level layout dividing its 10,000 sq. ft. space. The mezzanine level wraps around the entire space and overlooks the first floor, which houses the open desks, a few private offices, and conference rooms. The second level houses more private offices and about 30 permanent desks for members looking for a dedicated space.

Julian Nachtigal says that unlike many other spaces, they don’t have a formal reception area for people to check-in. “We want to steer clear of that because we don’t want you to feel like you’re walking into a traditional office. We have our office manager and community manager who sit at front desks near the entrance.”

Paul Evers, president and creative director of TBD Loft, a coworking space in Bend, OR, explains how the desire for a particular community dynamic led to the unique, open layout of the coworking space, built around his own firm, TBD Advertising. “TBD Advertising’s area, which encompasses about 4,500 sq. ft., is horseshoed around the western end of the building. In the very center of the space is about 2,000 sq ft. of common area for all the entities or groups that occupy the coworking space.”

3. Is the space stimulating and vibrant with nooks and crannies and design elements that surprise?

In addition to the usual amenities, such as WiFi, shared printers, and conference rooms, TBD Loft offers “white spaces where people can escape the desk and go someplace else for inspiration, which is critical in forming creative ideas.” They also have a mural-sized chalkboard wall (11×15 ft.), “a place where the community can gather and collaborate on ideas and build on ideas,” says Paul.

Even spaces that do have private office options for members, like CoCo in Minneapolis, MN, modify the layout to reflect openness. “What we've done that’s unique is rather than having permanent desks in closed-off spaces with four walls, which defines a conventional office, we've allowed for a bay-type layout with three walls. Our general theory is that if you have the fourth wall, you stop collaboration,” says Kyle Coolbroth, CoCo’s co-founder.

Greg Wilder, a former member of Indy Hall, describes how games were a fun way for members to blow off steam. He remembers fondly a corner in the kitchen where he set up a chess set that became very popular with the Indy Hall crowd. “In the kitchen area where people eat, another person and I decided to set up a chessboard to play some chess. The spot was an important thing for about ten or 15 of us at the space because it allowed us to break away from work, to decompress. Basically, it was a place to socialize, but also to compete, play, discuss, and have fun.”

Even after Greg left Indy Hall, the chessboard remained. He has since carried the tradition to his new offices in Brooklyn, where he now runs Orpheus Media Research, a tech company that analyzes music and sprouted out of Indy Hall. “One of the first things I did was buy a chessboard of the exact same model and set it up in an open area.”

4. Does the space reflect your professional brand?

The "look and feel" of your coworking space can also does wonders in laying the groundwork for your professional brand. If you have clients visiting you at the coworking space, expect them to be influenced by how your space looks. If they are in the design or marketing fields, they may be influenced by what they see on the walls, in the layout, and in the common area, even before they see your portfolio. Your space is a reflection of who you are as a company. Ideally, you want clients to walk in, look around— and know two things: that you are professional and have the creative chops to pull off a project for them.

Before Jason Barnett moved The UpTake to CoCo, the nonprofit was renting a run-of-the-mill office space in another location. They quickly grew tired of the environment and its lack of atmosphere. “As time went on, the space did not fit our brand anymore and it had a bland ‘office building’ feel,” he explains. “CoCo, the coworking space we recently moved into, solves all of these issues for us. The membership fee is competitive, the social atmosphere inspires networking and collaboration, there is coffee on 24/7 (a must for journalists) and the feel, vibe, and energy of the space fits our brand.”

5. Is the space evolving and is it open to your input and feedback?

Many of the “pop-up” coworking spaces that emerged as a novelty among freelancers and startups in Los Angeles, New York City, and San Francisco were constructed on member feedback. But even the more common brick-and-mortar, permanent coworking spaces involve members in their design plans— often with the objective of creating a perfect collaborative space that balances density and quiet areas. Crowdsourcing ideas and input is a clear sign that a space values its community.

Cohere founder Angel Kwiatkowski describes how she canvassed for input from her members. “We had entire brainstorming sessions where everyone drew pictures and wrote words and phrases that described their perfect collaboration space. I used all of that data to find a space and then used their feedback to hire the right designer who created a layout that has multiple seating options and is maximally laid out for physical density, collaborative work, and offers quiet places to concentrate as well as professional spaces to meet clients.”

Ignition Alley took the same approach when considering a new location for its coworking members in Atlanta. Alan Pinstein, a member, tells us, “They had an open house of the three locations they had scouted. We did a caravan tour and anyone who was interested went to all of those spaces that day to check them out.  Afterwards, they took a vote to see which location people wanted.”

Branding expert Joey Coleman enthusiastically participates in this kind of collaboration at the Quarterly Meetings at Affinity Lab, where he is a member, and by serving on various committees. “In terms of space design, the management team put together a Space Committee when moving to our new (current) location and I led that team. We incorporated many member suggestions in the initial build out. Our Quarterly Meetings give members a regular venue for submitting suggestions regarding operations, layout, decor, and programming. In addition to this scheduled time, the Lab is constantly experimenting with new, member-generated ideas for enhancing the Affinity Lab experience.”

Indy Hall’s Alex Hillman talks about how his space has gone through growth spurts driven by the needs of the community it serves. “We grew out of necessity, not because we saw opportunity, but because we had to. We were full and we knew we couldn't take on more members.” Alex and members at Indy Hall eventually found a 5,000 sq. ft. space to house their more than 100 members.

When it came down to getting the space outfitted and prepared in time for opening day, the community of members committed their time and muscle. “We had keys, and then we had three weeks to fit out the office before we started having rent to pay. The only way to pull off a 5,000 sq. ft. fit-out in three weeks is to have a small army of people helping you. Luckily, we are a small army of people, so it worked quite nicely.” He explains, “The key to the growth of the space is involvement of the people that you’re growing to support.”

In his book, Group Genius: The Creative Power of Collaboration, Keith Sawyer wrote that acts of collaboration, not solo flights of genius, are the key to breakthrough creativity. With its emphasis on building community, coworking spaces provide independent professionals a great alternative for working better and more productively by encouraging collaboration.

Your space ultimately influences how you interact with fellow coworkers— and whether you’re able to take full advantage of all the benefits of coworking. Make sure the coworking space you choose has creatively re-imagined the office space in new and inspiring ways to help you work better.