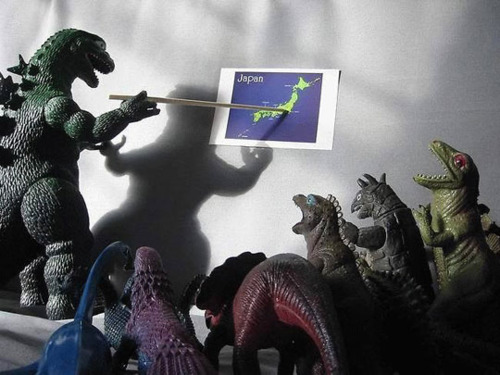 It's a common refrain: “Apple’s walled garden threatens the open web.” NPR’s Laura Sydell warns that “Apple’s mobile devices [are] more like living in a gated community than being out in an open city.” At BoingBoing, a prominent voice in the crusade against Apple’s supposed hegemony, Rob Beschizza writes “Apple’s taste in UI convention, inoffensiveness and so on is not shared by all. It’s a combination that serves its bottom line: ‘make good apps, devs, but not ones that make us look bad or compete with us!’” And Jonathan Zittrain of Harvard’s Berkman Center for Internet and Society strikes the alarm that “if we allow ourselves to be lulled into satisfaction with walled gardens, we’ll miss out on innovations to which the gardeners object, and we’ll set ourselves up for censorship of code and content that was previously impossible.”

The meme continues to gain traction. A Google search returns 349,000 results for “Apple ‘walled garden'” in 2011, versus 179,000 in 2010. But the threat Apple poses to the free and open Internet is greatly overstated by well-meaning critics and fear-mongering demagogues alike, who by proxy mislead the mainstream media and non-technical users while distracting from a far greater immediate threat to Internet freedom. 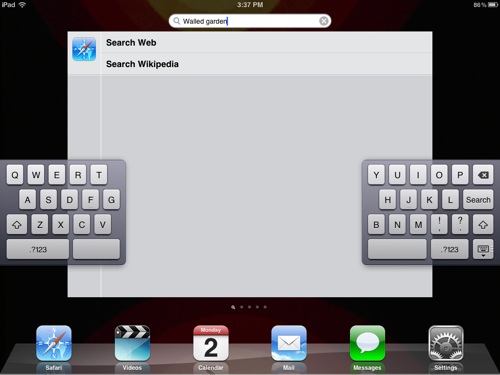 If you go by the declarations of Apple's critics, you may have an inaccurate view of the relative openness of the iOS operating system that powers the iPhone, iPad and iPod Touch. The Safari browser on iOS is built on Webkit, a rendering engine Apple developed and open-sourced that has since been adopted by many of its competitors, including Google’s Chrome and Android browsers, Amazon on the various Kindle devices, and WebOS. Safari is capable of rendering any page on the Internet that can be handled by the system hardware and navigated through a touch-based interface, so long as the page doesn’t require proprietary plugins like Flash. Web and Wikipedia search is baked into the operating system’s search function, and Siri pulls data from a host of services that include Yelp, Wolfram Alpha, Wikipedia, Bing, Yahoo and Google.

That said, Apple’s relationship with the open web is ambiguous as best. The company's tight control and even censorship of apps in the App Store, whether due to alleged offensiveness or potential competition, is an ongoing problem. The company’s use of despicable industry-wide practices to wield patents to stifle competition hurts the adoption of web standards. And their OS-level search functionality has some major blind spots.

But for now, Apple is far from the greatest threat to Internet freedom. The company is not alone in its attempts to dominate the web: Google, Facebook, Amazon, Microsoft and many less-entrenched players are all working to reduce open Internet access and encourage user "lock-in", whether through mobile devices, social media, streaming audio and video services, or online marketplaces. As Douglas Rushkoff wrote in "The Evolution Will Be Socialized", "we are witnessing the potential of peer-to-peer networking becom[ing] overshadowed by the hierarchies of the status quo."

And while the role Apple is playing in this certainly demands scrutiny, the stickiness of the "Apple's walled garden” meme—so prominent that outlets like NPR's Morning Edition now cite it with little explanation—breeds complacency about a far greater threat. The alarmist screeds of Boing Boing and Zittrain are parroted by mainstream media outlets in articles read by less-technical audiences, sometimes in Facebook news reader “apps” like the Washington Post Social Reader or The Guardian on Facebook, which are confined to a service that greatly threatens Internet freedom.

Here’s something I saw in my Facebook feed yesterday:

That's a compelling headline, and I wanted to read the article. But I couldn't, without signing up for the Washington Post Social Reader, which allows users to read the newspaper's articles within Facebook: 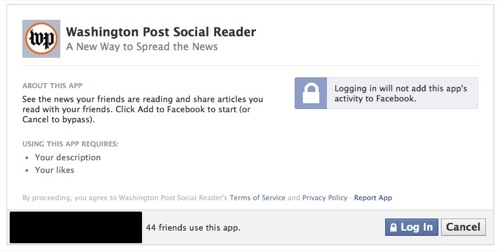 This is far more alarming than any current App Store. Facebook’s goal is to consume the entire web, like a social media analogue to Matt Taibbi’s now-iconic “vampire squid”, giving users little reason to venture outside of the service. Facebook is collecting the entire Internet for its midden pile: social gaming, email, Skype, Netflix, Spotify, cloud documents, and now news. The pitch is that you can easily share these activities with your social graph, but this “frictionless sharing” only removes a minor hurdle: there was nothing stopping a user from sharing what they’re watching or listening to or reading before, and people have been collaborating through cloud document services like Google Docs and chatting over Skype for years without Facebook's help. And while’s it’s merely annoying for friends and contacts to share their music listening and movie watching activity in closed Facebook apps, it’s downright disturbing to be forced to use a closed app such as the Washington Post’s Social Reader to read a news article a friend has shared.

For many of Facebook’s 800 million active users—the office workers whose Internet access is limited, the less-ADHD-addled majority who don’t spend their day with 30 Chrome tabs and RSS readers and social media clients open at all times, as we news junkies do—Facebook’s enveloping embrace is inviting. Facebook is where their friends and family are, sharing URLs can be confusing, browsing activity may be limited by their employer, and the wild web remains an overwhelming or even frightening place for many users. But such limited sharing just further draws Facebook's users into the service's thrall, a socially-codified lock-in that grows more alarming as the service continues to gain traction.

Facebook’s vision of consuming the entire web and controlling its use is far more expansive—and well-documented—than Apple’s. And the company's dominance of its respective market is much more entrenched: Apple’s iOS only commands 28.7% of the mobile smartphone market in comparison to 46.9% for Google’s Android platform and Blackberry’s 16.6%, which makes for a pretty soft form of hegemony. 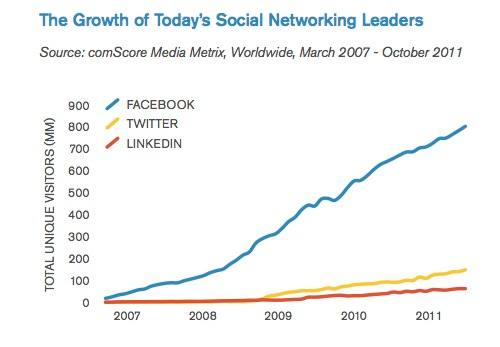 Meanwhile, Zuckerberg’s behemoth continues to consolidate its dominant position in social media. According to a ComScore report, Facebook's 800 million active users dwarfs LinkedIn’s 135 million and Twitter’s 100 million. The implications are significant: Facebook “commanded 14.7% of total U.S. consumer Internet-usage minutes” in September 2011, becoming “the wiring hub of the connected Web—a new ‘home base’ alternative to Google’s dominance of the last decade,” in the words of Ben Elowitz at All Things D. 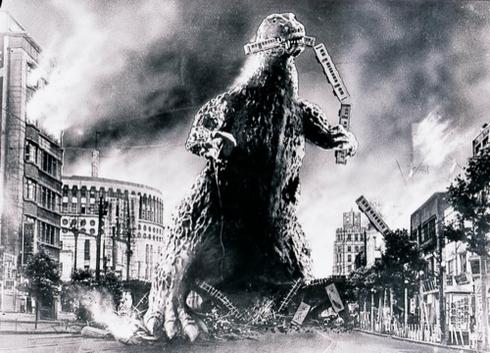 For news organizations operating in an ever-increasingly competitive market, Facebook is an imperious yet generous tyrant, and it's in their best interests to take heed. Facebook accounts for 38% of all sharing traffic on the Internet, and refers 1000 times more traffic than Google+. We have observed this phenomenon at Shareable, even though we serve an audience more likely to be critical of Facebook than the average web user: in 2011, Facebook shares of Shareable articles accounted for 10.52% of our referral traffic, versus 2.83% from Twitter. And while critiques of Facebook are common, they aren’t deterring the 500 million people using “an app on Facebook or experiencing the Facebook Platform”, and who have been reluctant to adopt alternatives such as Google+.

The meme of Apple’s walled garden persists, but so long iOS offers a browser capable of rendering the open web, and the mobile market remains wildly competitive, then devices like the iPad pose relatively little threat. Safari's embrace of HTML5 presents the opportunity to build web apps for iOS devices that exist outside of Apple's control. And even within closed iOS apps, there are plenty opportunities to share content out, whether through email, Twitter, Facebook, Tumblr, or other social services. Do Facebook’s apps offer the same basic luxury?

Curated App Stores such as Apple’s are not benign, given their ease of use and the risk of censorship, though the effect of native apps on browser usage remains unclear. As the leading platforms—iOS, Mac OS X, Android, Windows 8, Kindle Fire, Google Chrome, even Ubuntu—embrace the App Store model, the potential for abuse only grows. Given its legendary arrogance, high-handed attitude towards developers, enforcement of unclear App Store policies, and problematic relationship with web standards, Apple certainly demands continued scrutiny.

Few would argue that Facebook is a more benign force than Apple, but that's still the aggregate effect of the Apple walled garden meme. As the warnings of Internet freedom advocates and platform partisans filter through the mainstream media, nuance is lost and a misleading form of conventional wisdom propagates. Meanwhile, Facebook's behavior increasingly resembles an invasive species rather than a marauding behemoth. Apple’s App Store may be a curated garden with clearly-marked exits and entrances, but the creeping kudzu that is Facebook continues to spread, dominating the scarce resources of user time and attention, and overtaking all freely-growing flora it encounters.