Everything Solid Melts into Jelly: Coworking in Rural England - Shareable
Skip to content 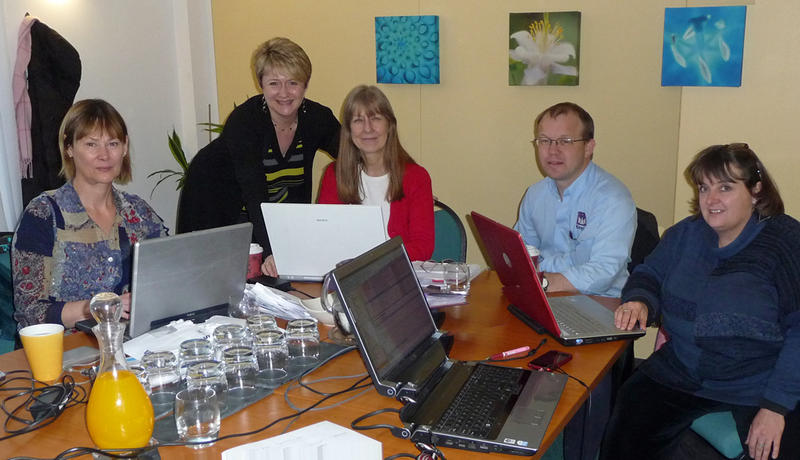 Next week is Europe's Jelly Week: seven days of coworking promotion across the continent. In its honor, we have this piece on one such Jelly in the rural UK.

More and more people are, by necessity or choice, working for themselves and from home. Sustaining the self-employed and telecommuters is vital for both our economy and our society, which functions much better when everyone has an income, pays taxes, and buys stuff. We benefit as a whole when people have the flexible to care for children, the elderly, and sick when necessary.

Often homeworkers, freelancers and small business owners work in isolated home offices and garden sheds. Whilst working for yourself has some great advantages, there are a few downsides: loneliness, a lack of boundaries, and having no-one off whom to bounce ideas. Jellies support self employed homeworkers and introduce them to coworking. They are free casual monthly co-working events where people can get together, usually with their laptops, to have a change from their usual workplace, meet some new people, chat, share ideas, and work together in a social environment.

Jelly was started in the States and is now increasingly popular in the UK, which hosts over 30 active co-working groups. In Norwich, a city in the rural county of Norfolk, England, I recently started JellyNorfolk with fellow volunteer Cassie Tillett.

Jellies are always free to use, with free wifi, good mobile phone coverage, a central location, and ideally a café nearby. Jellies have no external funding so our first challenge was to find a venue. By luck, the first place we spoke to was the King's Centre in central Norwich: unbeknownst to us they were planning a new coworking hub as part of their conference facilities. There were obvious synergies as they could point potential coworkers to our monthly Jelly to see how it worked. They were happy to let us have a room free of charge.

The make-up of JellyNorfolk is an unusual in that initially most of the people attending are predominantly female, although this will change over time. This is because I also run a women-only networking group and my first promotion was to everyone on my networking list. Norfolk is a large rural county and many of the people attending not only work on their own, but in very isolated locations. Some have driven 50 miles or more to attend. To my surprise several people have come along without their laptops: some have brought notes or training materials to read; on one occasion a seamstress bought some complex needlework. Some younger males working in IT start-ups have joined us for the last couple of sessions, which is a more typical demographic for Jelly.

Many people bring along work that they know that they tend to put off. Filing expenses is popular: people often turn up with plastic bags full of receipts. Others decide to embark on tasks such as creating a profile on Facebook, Twitter or LinkedIn because they know they will probably find people around them to help when they get stuck. Although there is plenty of chatter, there are also lengthy periods of pleasant silence as people get on with their work.

We have been delighted by the enthusiasm of people attending: what people say explains JellyNorfolk better than any description.

“A great break from the isolation of working from home, while having a productive and enjoyable day. It was interesting to meet other freelancers and self-employed business owners, and to discuss common problems.” Stuart Laidlaw, copywriter

“I learned at my first session for example about how Tweeting can really help in business which is something I hadn’t thought about before.” Anne Starkie, careers advisor

“The Jelly concept answered a need I didn’t realize that I had. To bring work in to do which I had been procrastinating about for ages, and ploughing right through it, without the distractions of all the things that I COULD do at home was very valuable.” Jane Aldiss, yoga teacher

“Jelly focused my attention. I had been putting off sitting down and reviewing notes from a training course.” Brenda Bowler, make-up consultant

“Jelly proves that productivity is improved if you are not purely working from home: ideas (some funny) randomly bounce around, sharing IT solutions, and small business best practice.” Gareth Hannaford, Retail IT

Jelly is a soft form of networking. Any attempts to pitch your business are not appreciated, but it is of course a way of meeting and building a relationship with other small business owners. One regular Jelly attendee told me that she had met two new clients at a previous Jelly, but she hadn’t even realized that they’d spoken about what she did for a living. In my opinion the best networking groups are really about self help and support; the business side follows naturally, which is what Jelly is all about.

Sophie is the founder of yours2share which helps people to find suitable like-minded partners to share just about anything, anywhere. Assets shared include property, boats, cars, motorhomes, horses, dogs,

Sophie is the founder of yours2share which helps people to find suitable like-minded partners to share just about anything, anywhere. Assets shared include property, boats, cars, motorhomes, horses, dogs, gardens and aircraft. Sharing methods are joint ownership, part-time rental or simple shared use with no payment involved. Sophie also runs a women's networking group (WiRE) and a co-working Jelly in Norwich, Norfolk, UK.