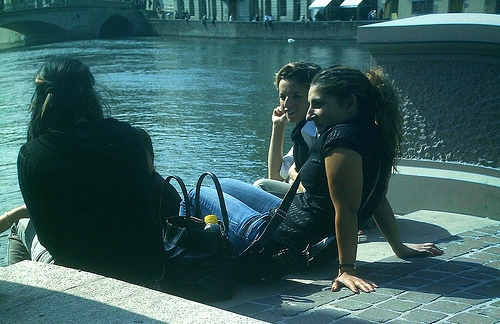 The New York Times today ran an intriguing article about efforts in European cities like Zurich, Barcelona, Paris, London, Munich and Stockholm to level the playing field between motorists and everyone else on city streets. It appeared on page one with the inflammatory headline: “Across Europe, Irking Drivers is Urban Policy.”

The message is clear: Sharing the streets threatens our God-given right to drive wherever we want, as often as want, as fast as we can. Yet if you read the article all the way through, reporter Elisabeth Rosenthal uncovers many reasons why reducing auto use has been a positive step in these cities: safer streets, cleaner air, less noise, more urban vitality, less dependence on foreign oil, and reduced global warming emissions.

She describes Limmatquai, a street in Zurich, as “a riverside pedestrian zone lined by cafes that used to be two lanes of gridlock.”

Indeed, these policies are remarkably popular with the people. In Zurich, the focus of this article, no street can be closed to traffic without being approved by voters in a referendum. Even the shopkeepers, who vigorously opposed the creation of pedestrian streets and reduction in parking spots, have seen no drop in business. That’s because pedestrian traffic rises 30-40 percent on Zurich streets with no cars or trucks.

Motorists who once drove everywhere easily adapt. The Times talks to Hans Von Matt, 52, who works in the insurance business. He sold his car and now bikes or takes the tram around Zurich and uses a car-sharing service when he wants to get out in the countryside. Car ownership in the city has dropped from 60 percent to 55 percent of the population since 2001, according to city statistics, and motorists drive less. Even 91 percent of delegates to the Swiss Parliament now commute by tram.

Michael Kodransky, global research manager at the New York-based Institute for Transportation and Development Policy, which promotes sustainable transportion initiatives around the world, notes that until recently Europe was “on the same trajectory as the United States, with more people wanting to own more cars.” But over the past ten years, he says, there has been “a conscious shift in thinking.”

So while the Times’ headlines reinforces the conventional wisdom that autos are the Kings of the Road and everyone else better get out of the way—or else! The article itself tells a much different story about the success of innovative policies that open up a city’s street network for everyone. It can even happen in Zurich, a citadel of the banking industry and long considered one of the world’s most old-fashioned, business-dominated cities.

If the stereotypically stodgy Swiss can do it, there no reason why why more carefree  Americans can’t become more carfree.