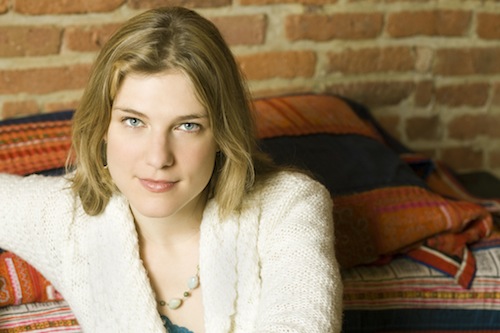 Anya Kamenetz covers technology, innovation, sustainability, and social entrepreneurship as a staff writer for Fast Company magazine and she is the author of Generation Debt: How Our Future Was Sold Out for Student Loans, Bad Jobs, NoBenefits, and Tax Cuts for Rich Geezers–And How to Fight Back

(Riverhead, 2006). Shareable.net talked to Anya about her new book, DIY U: Edupunks, Edupreneurs, and the Coming Transformation of Higher Education, which Chelsea Green will publish next month.

Neal Gorenflo: Why did you write this book?

Anya Kamenetz: My first book Generation Debt was about how student loans were hurting the future of the Millennial Generation. For this book I decided to take a step back and look at 1) why college is so expensive and 2) why it is so central in our society. I discovered a cadre of innovators who wanted to break open the problems of cost, quality and access using technology, social media, and experiential learner-centered models.

Anya: Traditional universities have a broken cost model (tuition is up more than any other major good or service for the last 20 years), which is interfering with their ability to meet burgeoning demand. On top of this, their teaching models are having trouble keeping up with the pace of change in knowledge generation. Students are learning more relevant knowledge and skills through internships and campus organizations and socializing themselves through Facebook–these are workaround, ad hoc models that don't directly bear on what happens in the classroom.

The most vulnerable universities are in the worst value-for-money quadrant: Undistinguished, middle-tier private schools that charge a lot of money but aren't particularly selective or innovative.

Neal: What does the future of higher education look like?

Anya: Personal learning networks and paths. A young person can combine resources and experiences from many different sources according to her needs and budget–seminars, online communities, workshops, video lectures, adaptive online tutorial software programs, travel, internships, volunteering. She can take advantage of mentoring and evaluation services as needed and move from institution to institution seamlessly. She is leaving trails on the web as she learns, creating a portfolio of real work and initiating herself into a community of practitioners whom she will be joining even as she continues to learn for a lifetime. 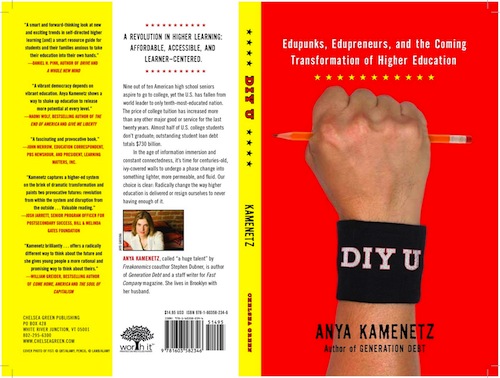 Neal: How are DIY Us more shareable (open, transparent, democratic, collaborative, and accessible to all) than traditional universities?

Anya: Courseware (video lectures, texts, curricula, tests) is open-licensed. Student projects are collaborative and published on the open web for all to see. Intellectual discourse and knowledge production is not confined within a discipline or other silo as professors, learners and amateurs share ideas over social media.

Neal: What qualities or behaviors do students need to make the most of a DIY U experience?

Anya: Ideally, they need to reject as much as they can the socialization that comes with formal school. They need an internal, not external locus of control; they need to embrace risk and failure, realize they can learn from anyone, anywhere, anytime, and that learning is associated with flow and excitement, not hardness and boredom.

Neal: What is the most unusual project you uncovered in your research? Which has the most promise?

Anya: I am super excited about something I just found out about (not in the book) called The Armstrong Institute for Interactive Media Studies at Miami University of Ohio. It's a self-supporting interdisciplinary interaction design consultancy that happens to award undergraduate degrees. Entirely team-based and project-based curriculum, 360 degree assessment by peers, clients, and professors. Glenn Platt is an economics professor who has been reinventing undergraduate education since 1996.

Neal: Where are the innovations coming from? And how would you characterize the zeitgeist behind this movement, if there is one?

Anya: Innovations are coming from Silicon Valley techies, professors in their offices, grad students, undergrads, dropouts, librarians, independent consultants, social entrepreneurs, government bureaucrats. All around the world, by the way.

DIY U I think goes back to the original inspired spirit of the university which grew up around 1000 as a freelance guild of independent scholars and scribes (universitas magisterium et scholarum). Plus a little bit of punk rock!