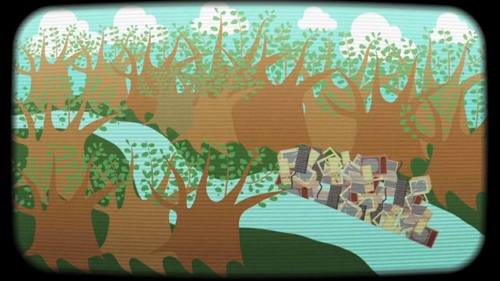 Planned obsolescence is the hallmark of many businesses: incandescent light bulbs, disposable razors, even textbooks. But the most egregious contemporary offender is the consumer electronics industry, perhaps reaching a new height of absurdity with Ikea’s recently-announced Uppleva, an all-in-one product that weds a soon-to-be-outdated television to the company’s flimsy particle-board furniture:

Whether obsolescence is enforced through fashion and design, lack of support, or subpar components, quickly-discarded consumer electronics are often exported to the developing world where hazardous components enact a grievous human and environmental toll. The effect of shortened life cycles is illustrated in the animated video The Story of Electronics:

Inspired by the documentary “The Light Bulb Conspiracy“, which details the history of planned obsolescence, London College of Communication student Cristina Oliver illustrates the issue with retro flair:

Planned Obsolescence – The throw away life style from Cristina Oliver on Vimeo.

The hyper-consumerist mentality that enforces planned obsolescence increasingly appears to be both environmentally and economically unsustainable. Within the design community, an ethic of design for reuse and social innovation is emerging. Social enterprises such as Greencitizen have developed a business model out of reducing e-waste, while co-ops like the Santa Cruz Computer Kitchen empower those on the other side of the digital divide by repairing and distributing discarded tech. Collaborative consumption defies planned obsolescence by facilitating the sharing of products, rides, and physical space. These alternatives demonstrate that while product life cycles seem to be endlessly contracting, there are viable and powerful alternatives to this persistent trend.