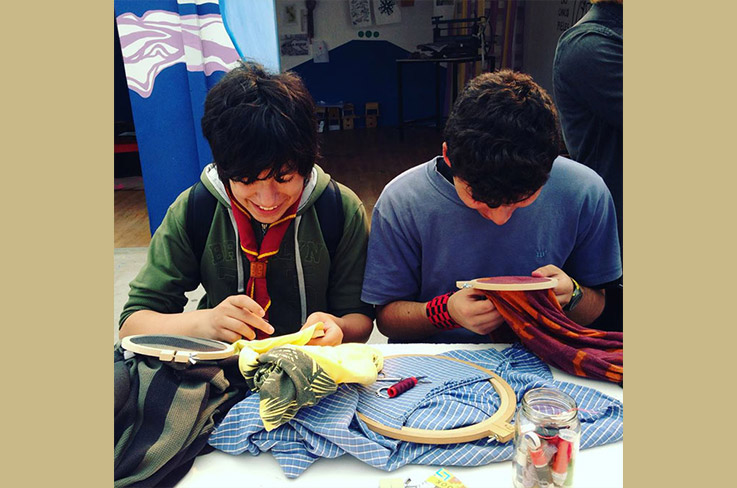 You can find them on Saturday afternoons, in a park, plaza or workshop, involved in what looks like a strange choreography: They're not buying or selling, eating or dancing. Instead, they're repairing things. Clothes, home appliances, toys, books, bicycles — even the most hopeless items can be fixed according to the Club de Reparadores (Repairers' Club), a dynamic and itinerant tribe of volunteers who've joined forces to battle programmed obsolescence and unchecked consumerism.

Marina Pla and Melina Scioli began incubating the idea for the club as they were working to spread the message about Article 41, their environmental protection initiative.

"We started working with recycling projects and that got us asking ourselves why so much trash was being generated in the first place," says Marina Pla. "We realized that very often things are thrown away because some small part broke, and we don't have the replacement or we don't know how to fix it. Most basic knowledge of repair has been lost, and we wanted to show that the tradition of fixing things is still very valuable today."

The club meetings include people who have items in need of repair as well as people who know how to repair things, or are willing to learn or improvise. The meetings have a festive atmosphere, but also one of teaching and learning. It’s not about people seeking free services, it’s about unlocking potential through sharing skills.

The first meeting took place on a sunny afternoon in Lezama Park, in the south of Buenos Aires, in 2015. The meetings, 21 to date, have taken place in almost all of the neighborhoods of Buenos Aires and have been held in other cities such as Córdoba and Bariloche in Argentina and Montevideo, and New York abroad. And the number of volunteer repairers continues to grow as more people are attracted by the idea of making use of their skills and sharing them with others.

Among the club members are Pablo Giordano, an innovative specialist in illumination who found out about the club on Facebook and has run the lighting table since the first meeting; Gabriela and Adriana, with their tools and sewing kits, quickly became the fairy godmothers of purses and jewelry; Diego, a biologist, offered to help fix electronics and set up the first table dedicated to the category; Sabina, a radio sound technician, was just passing by when she saw people fixing things and stopped to help.

"Right here it would be better to do an invisible stitch, want me to show you how," says Lamari, one of the enthusiastic sewing experts. She helps thread the needle, takes a measurement, and starts to give a one-on-one lesson.

Often a person who shows up with something broken ends up helping someone else. "That's what happened to Pelado, a friend who's good with bikes," Melina Scioli says. "At the meeting in Colegiales so many people came that he was getting overwhelmed; but he turned around and three more people had appeared to help repair all the bikes."

No Longer Held Hostage by Manufacturers

What makes all these people want to donate their time and talent? The answer is clear to anyone who's attended a meeting: Every object is a puzzle — the joy in solving it is made more satisfying by teamwork toward a common objective and the pride in producing tangible results. It's a celebration of collective affirmation against the conceits of the market, almost an act of technologic disobedience: to stand up as the owners of these items, not as hostages to the manufacturers. The sense of egalitarianism replaces the rules of the market with the rules of a game. The club thrives on the strength of collaboration: analogical, physical, human. Both repairers and those seeking repair feel appreciative and appreciated. Marina Pla tells the story of a man in Bernal who had brought an electric oven that he didn't think could be fixed. "But Pablo fixed it, and the man went into a bakery and bought a bunch of chipá (an Argentine cheese bun) and we heated it up in the oven."

The Beauty of a Scar

The Repair Club was inspired by the Repair Cafés that sprung up nine years ago and have now spread to all five continents, and also by the Restart Partiess, oriented toward electronics. The idea of taking repair into your own hands — to Do It Yourself — is growing around the world along with anti-consumerism and environmental conservation movements, which see programmed obsolescence as another of capitalism's many disadvantages.

In Latin America, repair is an old tradition that has become lost in urban settings over the last few decades but has now received renewed attention. With a year of meetings behind them, Pla and Scioli now recognize a few trends among broken objects: "Bags and accessories, lamps, headphones, immersion blenders." The Repair Club has taken on a life of its own: editions of the festival have been held in other places in Argentina without the presence of its founders, who offer their support and advice.

"What we want to do is to redefine repair, move it from something complicated or distant to something associated with sustainability, responsibility for our things and our consumption," explains Marina Pla.

That’s why, before each meeting they canvas the neighborhood to invite professionals who live nearby: carpenters, tailors, watchmakers.

"These people are experts, generally from older generations, who feel undervalued — we want repair to come back in fashion," Pla says, explaining the Japanese term kintsugi — to admire the beauty of a scar — as she holds up a pillow cover crisscrossed with gold thread.

"We want to associate repair with the idea of caring for something, with love, with an equal exchange," she says. "Things are just things, but they hold traces of humanity… if someone helps you fix something it becomes even more human and more meaningful."

This article was written by Marcela Basch and translated by Frances Riddle. It was originally published on FuturePerfect.

All photos courtesy of FuturePerfect.

The world is in need of ideas for a better, more sustainable future, but ideas are not enough. FUTUREPERFECT, an international and multilingual internet platform, tells the stories of individuals,

The world is in need of ideas for a better, more sustainable future, but ideas are not enough. FUTUREPERFECT, an international and multilingual internet platform, tells the stories of individuals, initiatives, organizations, and businesses that have moved from ideas to action. In implementing new practices and reinvigorating old ones, these cooperatives, companies or communities are actively working towards a better future in the present. Their focus is not on economic growth but on sustainable prosperity. They move beyond searching for the best technology, instead asking for better ways of life.

FUTUREPERFECT shows that the transformation of modern society toward sustainability is not principally the domain of scientific and political “experts”. Just as well, it is the business of ordinary people who use their scope of action to experiment with what is possible in the here and now. To facilitate an exchange of ideas and to inform and inspire a broad diversity of experiments with a sustainable future, FUTUREPERFECT features stories from around the world. They are published as Creative Commons articles to encourage broad distribution and sharing.

FUTUREPERFECT is a joint venture of the German foundation FUTURZWEI, the Goethe-Institut and an international network of partner institutions. The stories are found and chosen by the local partners, i.e. organizations and individuals in the participating countries, and written in the respective local languages. Their English and German translations are published on the FUTUREPERFECT platform, whereas the original versions are to be found on the Goethe-Institut’s specific country sites.