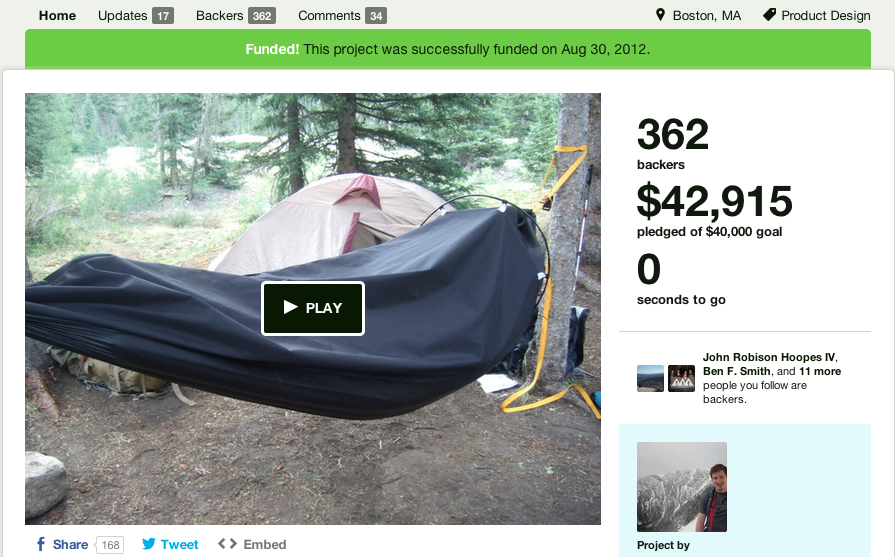 In August 2012, one of our writers Mike Brown raised $42,915 the crowdfunding platform Kickstarter to build the Alpine Hammock.  This will be the first in a series of posts by Mike on how to run a successful crowdfunding campaign.  He will draw insights from his own experience in addition to interviews he’s done with almost a dozen other successful crowdfunders.  The post will focus on how to choose the right platform to help bring your awesome new project into the world.

In 2012, over $2.7 billion was raised on crowdfunding sites, an 81% increase from 2011.  These platforms give individuals the ability to raise cash to pursue creative projects, build innovative products, and even start new companies.  I feel very fortunate to be coming of age in a time where this global access to resources is possible.  It has helped to take the Alpine Hammock from two guys with an idea and no cash to a market-ready product within one year.  This wouldn’t have been possible for us without the help of crowdfunding.

Having a cool new idea is a good start, but where do you go from there?  Your first step should be to research various crowdfunding platforms to determine which one is right for you.  In my rampant Google-ings while I should be working, I’ve found over 50 different online platforms that are meant to help people raise money from the crowd.  Popular sites include big names like Indiegogo and Kickstarter, but there are a few dozen others that are also worth considering, each with their own style and subtleties.

All or Nothing vs. All or Something

These are the most common types of crowdfunding platforms out there.  Typically a project creator will post their project and backers can elect to give them money for their campaign in exchange for cool rewards related to the project (a CD, a t-shirt, or a cool new gadget for example.) 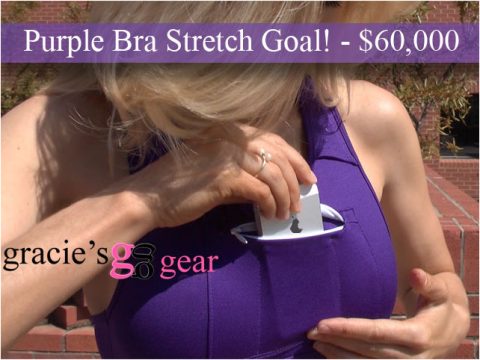 Some sites will only let project creators keep the money that they’ve raised if they reach their fundraising goals within the allotted timeframe.  These are better known as “All or Nothing” campaigns.  Examples include sites like Kickstarter, Pozible and Peoplefund.it.  This brings a level of uncertainty to the campaigns that can be very exciting for both project creators and for backers alike.  As a result, one often sees high spikes in funding in the last 24-48 hours of the campaign because the stakes are high. If you don’t reach your goal on time then both you and your backers will go home empty-handed.

In contrast, there are many sites that allow you to keep the money you’ve raised even if you don’t reach your fundraising goal.  These are often referred to as “All or Something” campaigns.  Examples include sites like Indiegogo, Rocket Hub and Ulule.  If you come up short of your goal, you can still have access to your funds.  However, while the stakes are lower for these types of campaigns, they will take a higher margin off the funds you’ve raised if you don’t reach your goal (9% compared to 5% if your goal is reached).

Another common form of crowdfunding involves a new spin on investment where a variety of people (i.e. the crowd) can invest money and own equity stake in your company.  Equity-based crowdfunding platforms have existed in Europe since 2012 and include sites like Seedrs, Crowdcube and FundedbyMe.  The United States is lagging behind Europe by about one year as the country waits for the U.S. Securities Exchange Commision to publish regulations in accordance with the JOBS Act signed by President Obama in early 2012.  Sites to keep an eye on in the United States include EarlyShares, Fundable and 99Funding but don’t expect to see much action until late 2013 or early 2014. 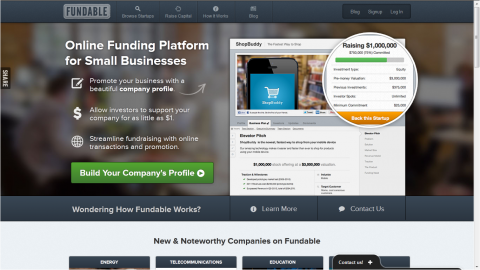 The basic idea of Peer Lending is that you can raise money for your project by getting a loan from the crowd.  This model has one major difference as compared to other crowdfunding projects in that the money you raise you actually have to return to your backers… with interest (higher interest if you have poor credit).  Until now, crowdfunding has been commonly associated with exchanging money for cool products.  However, with peer lending you can raise money for a microfinance venture with Kiva or for more traditional loans with Lending Club and Prosper (U.S.) or Zopa (U.K.).  The jury is still out as to whether peer lending is better (safer, faster, cheaper) than using traditional banks.  However, with the recent financial collapse of big banks we've seen across the world, I think many people are hungry for alternative ways to get loans. 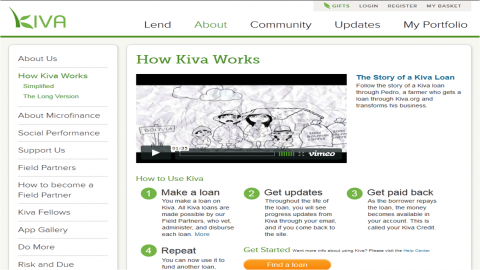 As global participation in crowdfunding grows, we are starting to see noise in the numbers and varieties of projects that are looking for funding.  Therefore a few sites have been created that are targed to specific topics or communities.  For example, the medical community has Medstartr, the educational community has Crowdfunding Campuses, the social venture community has Start Some Good.  Even the vehicle community has jumped on crowdfunding, allowing you to crowdfund a custom-made car at the Dodge Dart Registry.  Closer to the heart of the Sharing Economy, there is a crowdfunding site for the Commons called Goteo.  On Goteo, the goal is to collaboratively fund projects that will result in open code and/or free knowledge.  Therefore, projects on Goteo promote a social return on investment as opposed to simply launching a new product or creative project.  I expect to see many more targeted offerings in the near future. 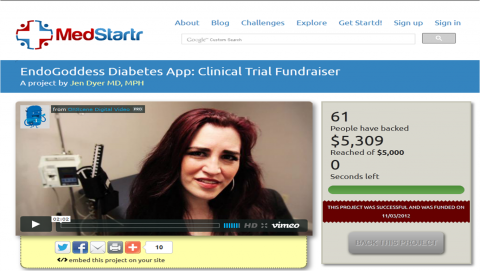 The Moral of the Story

I hope you now understand why it's important to choose an appropriate crowdfunding platform for your project.  It wouldn’t make sense to crowdfund a medical device on Kiva so make sure to do your research ahead of time.  Crowdfunding isn’t going anywhere anytime soon, so you can expect a suite of new platforms by the time you’re ready to start raising money.  Crowdfunding is hard work and most campaigns fail but the rewards can be immense to those who are successful.  Regardless of the outcome, the first step for any new project is to find an ideal platform and then you can get start planning your campaign accordingly.