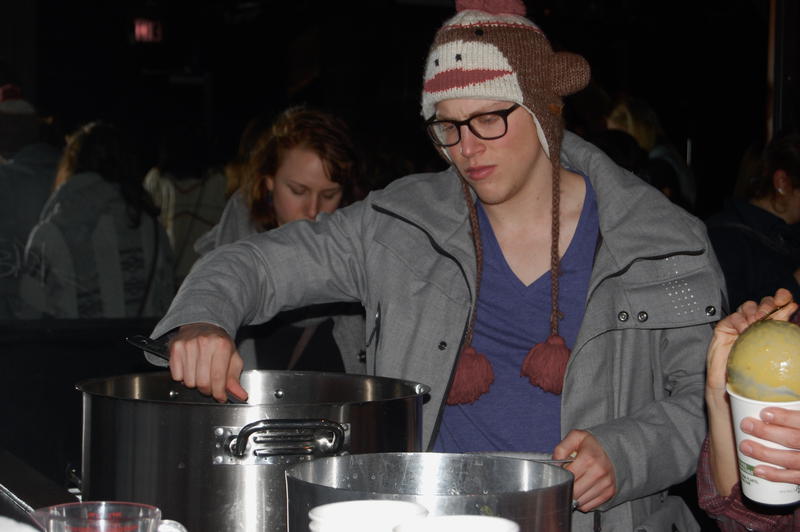 Ann Arbor has a unique variety of innovative, passionate, and talented community members that include both University students and “Ann Arborites” or “townies.” As a student, however, I often feel a large disconnect from the Ann Arbor “townies.” I find that beyond two main drags, most students stick to university turf. Our bubble generally does not extend out to the greater community, yet.

Recently, after organizing Ann Arbor’s first UM SOUP, my whole perception of this divide changed. UM SOUP (University of Michigan) was a public dinner and collaborative space held on March 23rd, 2013 at LIVE A2 Bar. For $5, the public had the opportunity to learn about community-based projects, eat a local meal, listen to jazz music, and vote for their favorite community start-up project. This event created the opportunity for the public to support creative ideas and people in Ann Arbor who share a common goal to better the community.

Sunday Soup micro-grant dinners originally started in Chicago in 2007 and have since been adopted by a worldwide network of organizers from over 60 cities. The structure of the event is similar across geographies – a group collects grant applications from community members cooks a meal, invites the public to buy a  dinner in exchange for a vote, and allocates the meal’s profits to the winning proposal. This means that the community decides where the grants goes based on its own collective priorities, rather than an outside foundation, government or private donor. It's grassroots fundraising at its best and democratic, participatory budgeting in action!

After attending many of the sister SOUP events in Detroit last summer, I was inspired to make it my mission to bring SOUP to Ann Arbor. I felt that in Ann Arbor, both the students at University and community members have many innovative and inspiring projects ideas to better the community, yet lack the start-up funds. UM SOUP provides a celebratory opportunity for anyone– students, artists, entrepreneurs, environmentalists, non-profit organizations, enthusiasts– to share their vision with the public and be rewarded. At SOUP events, no proposal idea is too crazy, too small, or too big–all ideas are welcomed! Additionally, UM SOUP could be a stepping-stone to close the gap between students and community members by bringing folks together in a collaborative space and potentially attracting student volunteers.

With a seed grant from Shareable Magazine, I was able to make my dream become a reality and create the first UM SOUP in Ann Arbor. We received over 15 applications ranging from individual UM students, community residents, student organizations, artists, non-profits, and local activists. We narrowed them down with a panel of judges to a final four candidates:

Although the projects are very different, they are all new projects that have as part of their mission to foster connections among citizens, students, and organizations and to support the local community. The event winner was Resource Fund, which received a total of $841 from over 150 attendees and donors, including SPARK Ann Arbor and Crazy Wisdom Tea. We also received donations to defray the cost of putting on the event, including free use of the space, LIVE Ann Arbor, and food from Zingerman’s Deli and People’s Food Coop.

After organizing UM SOUP and meeting all of the incredible applicants and supporters of the event, I discovered what it truly means to live in a “shareable city.” I was amazed by the connections, ideas, conversations, and community activism that brewed over UM Soup.  For this reason, I am proud to not only be a student at the University, but also an Ann Arborite. Throughout the whole event you could feel an energetic buzz that fostered this passionate environment and brought together a diverse, supportive group of people.

Beyond the financial impact, which is significant for a start-up nonprofit, I witnessed new relationships and collaborations being weaved together by amazing people sharing ideas to create a better city. This was truly a unique experience and I look forward to hosting more UM SOUP events next year.

I encourage others to organize their own SOUP events and help provide the opportunity for a community project idea to become a reality. Here's a guide on how to host a SOUP event.

Isabella is a student at the University of Michigan Ann Arbor, majoring in environmental science with a specialization in sustainable food systems and health. She is a vegan, yogi, and

Isabella is a student at the University of Michigan Ann Arbor, majoring in environmental science with a specialization in sustainable food systems and health. She is a vegan, yogi, and nature loving woman with a vision of healing the world by connecting food and people.