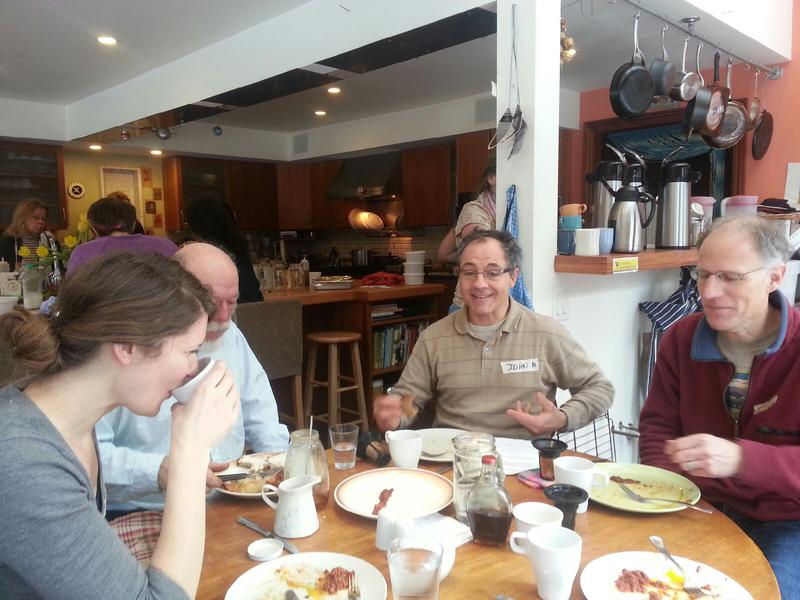 I was on assignment for Shareable in Ann Arbor, Detroit and Chicago to help students organize sharing economy projects. I had a hunch that you can find sharing anywhere. Maybe it looks different in the Midwest than the Bay Area where I'm from, which is a kind of charismatic poster child of sharing economy. I gathered from living in Kansas this past year that Midwesterners do more informal types of sharing based on existing relationships. This may be less visible to the outsider than sharing that's facilitated by the Internet. There are agricultural, energy, and telecommunications cooperatives (the ultimate shared enterprise) throughout the Midwest which serve millions of people, but they don't necessarily identify as part of the sharing economy.

Ann Arbor, was my first stop. It's a quaint, walkable town that is dominated by a competitive, top tier college – the University of Michigan. The town, in some respects, is divided into two parts, as locals call it “Town and Gown”. In search of student activists, I decided to stay in a graduate student coop, one of 21 properties owned cooperatively by the Inter-Cooperative Council supported by over 600 members. To my disappointment, I did not find houses full of radicals as I did at my days at the U of O student coops in Eugene, OR but serious students.

I soon realized that many students at the University of Michigan have their nose to the grindstone, hopefully to come out the end of the higher education pipeline with a career that will pay off their huge college debt. Perhaps this reality keeps students from meddling in community or political affairs too much. The University of Michigan wasn't always this way. In the 60's, it gave birth to Students for a Democratic Society, an influential New Left student organization that played an important role in the civil rights and anti-war movements in the 1960s..

This serious career focus was also reflected in the attitudes of many university staff as well. I went to what I thought would be sharing-friendly college departments, like the Sociology Department. When I explained I was searching for students interested in transforming the economy, sharing resources, and community organizing, they seemed to act as though I was speaking an alien language. “Hmmm” followed by an apology was a common response.

To be fair, further into my trip, I did find a student in the sustainability program who is organizing a community crowdfunding event, called UM Soup, with Shareable's seed grant, and another who will be organizing a sharing economy conference. A former and soon to be again UM student is growing a bike kitchen and youth bike program also through a Shareable internship. The School of Information and Open Michigan turned out to be a small hub of outside-the-box thinkers. They help host an event called Datadive – a kind of information and statistics collaborative student hack-a-thon for nonprofits that need data analysis.

After reassessing my strategy, I stepped outside the Gown and into the Town and a whole new world opened up. I spent a lot of time searching online for keywords like “free Ann Arbor” and went to as many progressive social events as I could. On the main drag, I found the Workantile, a cooperatively run coworking space and All Hands Active – a happening maker space.

My first real breakthrough was at the thriving Ann Arbor Free Skool, which offers free classes on anything from Spanish and textile crafts to non-pharmaceutical contraception. I decided to start off on the right foot by offering my skills to the community.  I hosted several classes, Shiatsu massage, Qi Gong, and a discussion on alternative economics, where I met some local activists and began to map the new economy in Ann Arbor with them. The Free Skool is also where I met Tom, a member of a tech collective who spontaneously made a solidarity economy map of my Detroit contacts and shared it with me.

The former founder of the now dormant timebank and local currency in town was a retired UM professor and a wealth of information. He impressed me with his stories of sharing seeded by the timebank concept, like the durable medical equipment and pick up truck coops that still exist, along with many new relationships in the neighborhood, which he organized by door knocking and now by using Nextdoor.com. He pointed me to the food coop and other neighborhood-based community development projects like his.

Last minute, I heard economist Michael Schuman was coming to town for a forum on local economics. I knew there would be some sharing enthusiasts there. The participants were more government and business-oriented than I'd expected, but very enthusiastic about creating a new, local economic landscape. Most of the breakout groups came to the conclusion that despite a good number of transformative projects in Ann Arbor, much of it remains unseen (especially to students) and unconnected – an online directory of resources was needed first. Later, I made this map of Ann Arbor's Sharing Economy, inspired by Tom's map of Detroit, and sent it to them.

I was lucky enough to share a table at the forum with Lisa Gottlieb, a social worker and founder of Selma Cafe – a community breakfast that benefits local, sustainable farming efforts. Lisa invited me to the Selma Cafe and I squeezed it in one morning. Though Lisa was on her way to work when I got there, I shared a meal and lots of interesting conversation with some remarkable people, including a man who volunteers part-time in Haiti doing healthcare and other friendly folks interested in the concept of Ann Arbor as a sharing town.

At that point, it seemed to me that outside of the college there was already an informal but significant network of people committed to community-building and local economic projects in Ann Arbor. It just took some time to find them. One person leads to the next and there are key hubs to look for – the gathering places of people who share, like the urban farms and community gardens, seed swaps, maker or hacker spaces, Free Skools, Really Really Free Markets, bike kitchens, timebanks, skillshares, coworking spaces, collectives and food coops. Some of these projects exist in even pretty conventional towns, as I learned in my days co-organizing the San Francisco Really Really Free Market, a radical gift economy which took root in some very unlikely places.

At the end of my trip, I heard about the Reskilling Festival through the Free Skool. I sampled fire-making and meditation workshops and scored a new rain jacket and sweater from the free stuff table. At this point I was hooked, and if I wasn't so frustrated by the incessant snow, I'd seriously consider living in Ann Arbor. In just a little over a month, I really felt like I'd already found a community of caring, idealistic folks trying to figure out a way to embed economy in community and local ecology rather than the other way around.

If there ever was a recipe for cultivating sharing, this town has it. And if this small town in Michigan has it, it might just be growing in your backyard too, maybe without you even knowing it. So try digging a little deeper and start sowing some sharing seeds in your town.