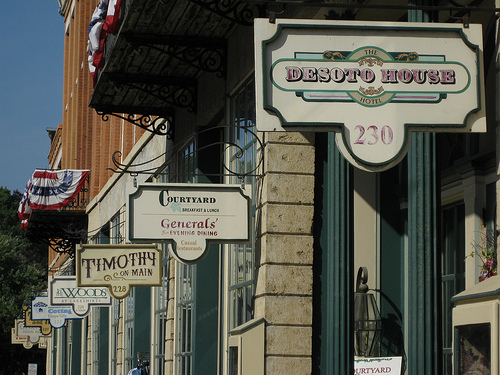 Coworking is a collaborative style of work in which mobile professionals share a common space as well as ideas. Perfectly suited to the location-independent lifestyles of graphic designers, software developers, writers, coworking has taken many of the "laptop professions" by storm, and grown rapidly in almost every major city of the United States.

It makes sense that major cities and metropolitan areas would be hubs of technological innovation. Every entrepreneur and start-up CEO knows that the big city is where the innovation happens. Or is it?

In the past year or so, the coworking community has seen a surge of interest in small cities and even rural towns. Areas where the population is quite small and something other than technology is the main industry.

Coworking spaces in more densly populated areas have the numbers on their side. Chances are their are more than a few independent professionals among the hundreds of thousands that live in these cities, and it's an even better chance that they'll "get" the concept of collaborative workspaces and be interested in trying it out.

The same can't be said for towns of less than 100,000 people and far fewer businesses. Building a coworking community in rural areas requires a larger perspective of what collaborative work is all about, who can use it, and what it can do.

"Coworking thrives with a diverse membership interested in collaboration, and in my experience this is the way that rural entrepreneurs approach business development," said Mark W. Kidd, Communications Director for Roadside Theater and Thousand Kites at Appalshop.org.

Kidd is in the process of building a coworking community in Whitesburg, Kentucky: a rural town with a population of about 2,000. In his quest to service the diversity of interests and occupations in Whitesburg, Kidd has shared the coworking concept with community agriculture activists and community canneries, musicians, local and regional economic development agencies, small business owners, and non-profit organizations.

"Folks in rural places know, even the smallest communities have a diverse economic life," said Kidd. "Some of these folks are drawing on other development models for rural communities, and I am looking forward to finding new synergies between coworking and other community-based approaches."

Compared to some other approaches to supporting rural economies and particularly in cultivating microenterprise, establishing a coworking space is low-overhead. Coworking thrives with a diverse membership interested in collaboration, and in Kidd's experience this is also the way rural entrepreneurs approach business development.

The entrepreneurial spirit is strong in rural communities, and coworking gives these fearless business owners the opportunity to come out of their basements and garages,  and into the public eye.

"Coworking can energize small cities/rural economies by creating opportunities for busineses and people, and creating jobs," said Jessica Hill, a human services profesional currently building a coworking community in New London, Connecticut (pop. 27,610). "People, especially business want to feel supported.  If you feel supported and connected, you are more likely to stay where you live."

Sometimes, just providing that opportunity for visibility and connection is all it takes to convince rural entrepreurs to give coworking a try.

Space owner Linda Goin had been researching coworking for about six months before she acquired a part-time position for Discover Downtown La Grange, a Main Street program in La Grange, Kentucky, a town of about 8,000.

"I realized that our historic district held spaces that would be ideal for coworking or for office spaces for individuals who wanted to be on Main Street, but who could not afford some of the storefronts alone," said Goin. "These spaces often are too small for retail stores or large offices, but perfect for service businesses that could mesh and work together in open environments."

Facilitating community in a small town and county can be easier than big cities, especially if other people get the "open" concept and become excited by the opportunity to meet other folks in a collaborative atmosphere says Goin. At the same time, some people may come around simply because they don't understand collaboration and were curious.

Goin's space, La Venture Station, opened in early October with two full time members, and has since acquired several more part-time members and and plenty of folks, including a massage therapist and a holistic health practitioner, who use the conference space for meetings and work sessions.

Like Goin, Kidd believes that coworking spaces, hackerspaces, and makerspaces as variations on the same organizing principle, and envisions a community where microenterprises focuses on all three can grow and thrive together.

It is this all-inclusive approach that allows coworking to be such a nurturing haven for rural entrepreneurs.

"Rural communities are innovative, creative places,"said Kidd. "Many rural economies have limited access to resources or capital for growth, so a model like coworking is so useful because it helps address the lack of infrastructure and lets rural innovators and entrepreneurs get to work."

"My town is at its best when we collaborate between non-profit organizations, businesses, and local agencies," Kidd continued. "A coworking space has the potential to serve as an important venue for small communities to share expertise and opportunities, combine talent and imagination, and start new initiatives together."