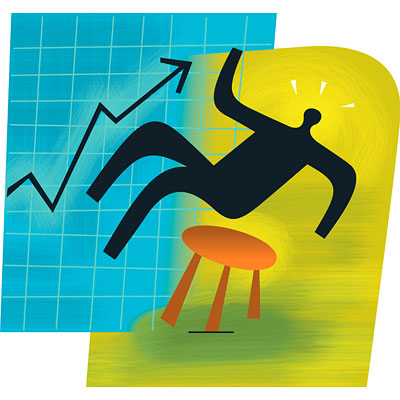 Illustration by Doug Ross of www.dougross.com

It's hard to concentrate when you're worried about a wayward fingernail clipping ricochetting off the back of your head.

It's not that the sliver of hardened DNA could really do all that much damage, it's more the anticipation aroused by that unmistakable "clip! …clip!" at the desk behind you; and not being able to see where the clippings are flying.

When sharing an office space with other people—even people that you genuinely love—there comes a point when all of the strange human idiocyncrocies of your fellow coworkers come out of the woodwork. Often, you don't notice them right away, but once you do, they become ingrained in your everday office awareness.

The charms of coworking far outweigh the occasional airborne fingernail clipping. But an anonymous (or public) venting system seemed to be in order. So, in honor of International Coworking Day, which came and went on August 9, I decided to level the playing field a bit, and published a survey asking coworkers to check the box next to the most irritating violations of coworking etiquette.

The survey is still open, by the way, if you're looking for a quick, two minute romp with procrastination, and the results, thus far, appear in the chart below. 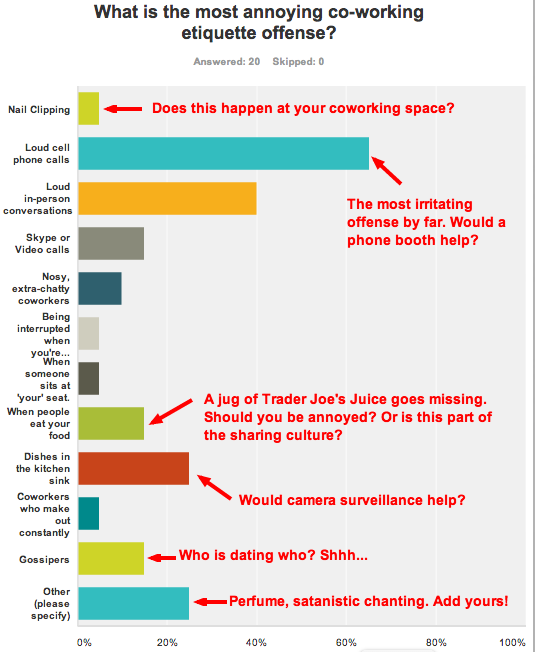 Not surprisingly, the top-ranked coworkers' annoyance is, loud cell phone talkers. (Fingernail clipping appeared lower on the list, which leaves me to believe it doesn't happen that often in the worlds' coworking spaces. True?)

Cell phone conversations are similar to public fingernail clippings in that they're impossible to tune out. In most cases, the conversation of a stranger or coworker has no relevance to your life, yet the Gods of concentration are unanimously seduced by every minute detail of last night's mussell dinner with someone named Tamara. A recent New York Times blog titled Cellphones as a Modern Irritant pinpointed the phenomenon as the brain's desire to "fill in the blanks" of one-sided conversations.

"I think we really need little phone booths within this space so people can have 3 or 5-minute conversations without having to go outside (where it's really loud) or rent a meeting room (which I've done)," writes Traci Hukill, a coworker at Cruzio in Santa Cruz.

But what would the coworking world be like without unsolicited, juicy details of the lives happening around us, which can be far more interesting than our own?

The second ranked offense was loud in-person conversations—equally enticing to the attempting-to-focus brain, but a little easier to convert to white noise.

Anybody who has shared a living space with roommates is no stranger to the third most irritating coworking offense: the dirty dish phenomena, which is in full swing at Cruzio.

Above the sink in our shared kitchen hangs a sign (which has been reposted in countless different variations, highlighted, and underlined), requesting that each person: be responsible, no, vigilant, no, respectful—just please do your freaking dishes! And below that sign, which might as well be taken down at this point, is a permenant, though shapeshifting, pile of dirty dishes.

Should our monthly membership fees come with a full time dishwasher? (Not to be confused with dishwasher, the appliance, which we do in fact have.) Some really do think so.

In the "other" category of the Office Etiquette Survey, emerged some thought provoking items, including: "Too much perfume!!", "Satanistic and voodoo based chanting is really annoying," and "Leaving things on desks – marking territory?"

The third, I am guilty of myself: I often leave my laptop on my favorite desk and wander into downtown Santa Cruz, returning one or two, or sometimes three hours later. Thank you, anonymous coworker at the Guild in Chicago, for alerting me to this potential offense.

Which leads me to one of my favorite things about my particular coworking office: everyone is trustworthy enough not to steal my Macbook, which if stolen, would virtually end my career in journalism and possibly my life.

Cruzio's arsenal of security cameras may play a role here though, since, in the un-monitored kitchen, shared fridgespace items do occasionally go missing—missing food ranked fifth among coworking greivances. 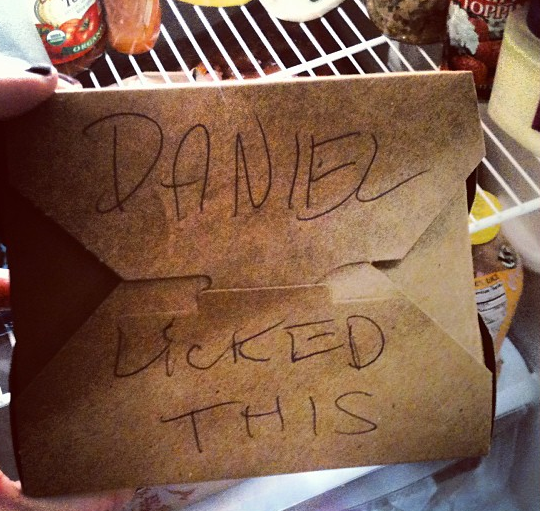 One coworker's method of fending off food theft. Although, it could have made the leftover sandwich inside all the more enticing.

Is the occasional missing jug of Trader Joe's Lemon Ginger Echinachea juice simply a sacrifice we make to participate in sharing culture? I hope whoever finished it off loved it as much as I did.

So the point of this post is to ask you, the reading coworker: should there, perhaps, be a code of conduct that coworkers follow?

My coworker Bob Prentis explains it best: "This place is full of pleasant people, BUT some of them don't seem to realize it's a work place – they are not mean, just clueless."

It's a sensitive and fine line to walk, of course. When you're deep in concentration, for instance, with headphones inserted, a nice concentration-potentiating song repeating at top volume, and one of these pleasant people delivers a terminal axe to your current thought with a warm hello, can you really be annoyed? Being interrupted while working was lower on the list than I expected, and somehow, the "Do Not Disturb" sign I've dreamed of placing on my desk seems like it would send an inappropriately antisocial sort of a message. What about a physical thought bubble with breathing holes, and a slot for written messages from coworkers?

The intent of this fishing-for-insight post (please comment!) is to create a universal, crowdsourced code of coworking conduct. But drafting such a code may prove to be much harder to do than I had previously thought.

The reason, is, to me, also the most fascinating factor of coworking: all coworking spaces seem to harbor their own unique culture. Some may be quieter than the Library of Congress, while others may be prone to visits by a local mariachi band. And accepted behavior at one space may be taboo at another.

The facets of coworking culture is best illustrated by a fellow journalist Georgia Perry, who writes:

"I was a freelancer for a couple years in Portland. At one place I rented this tiny solo office (50 square feet plus a fire escape to smoke writerly cigarettes on) and then I moved to a co-working place next to a Russian butcher shop so it always smelled like sausage. People would bring their dogs in and never show up before 11–there were more likely to be people there at 2am than 10am. I miss it."

In Matera, Italy's Casa Netural, it's common for guests to stay the night, in fact the founder Andrea Paoletti lives in a loft upstairs. But when I inquired with Cruzio if I could maybe pull an all nighter some time, it was strongly discouraged.

To conclude, I will say this: sharing a space with other human beings feed a therapeutic need, and can be especially conducive to creative productivity. And the irritations that will inevitably arise in shared spaces may just be the ones you remember and miss the most years later.

Although it will be undeniably awkward, confronting workplace irritations presents an oppurtunity to communicate and work together to improve the overall function of a productive space—and productive society at large. But please, clip those fingernails over a garbage can, and preferably in the intimate privacy of your shared bathroom.

Got any coworking etiquette stories or suggestions? Share away in the comments!