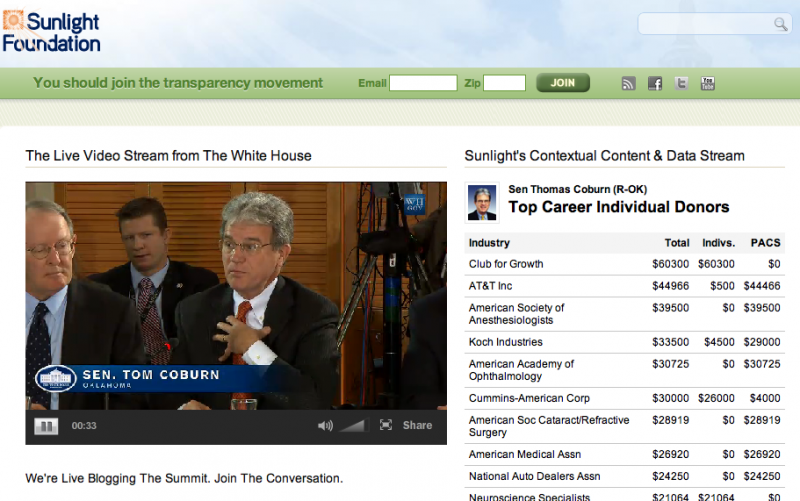 In the movie Mr. Smith Goes to Washington, a small town youth leader is sent to take on a corrupt Congress and becomes mired in the continual grayness many politicians project onto policy. Distant, technical, and steeped in  money, this verision of Washington is too easily seen today. Yet, like James Stewart's charater, many people still believe in the principles this country was founded on, and can see through the blanket of rhetoric. All it takes, they say, is a little transparency.

Recently, the movement toward transparent, open government has gained a powerful ally: the Sunlight Foundation. Established in 2005, the Sunlight Foundation "uses cutting-edge technology and ideas to make government transparent and accountable." In fact, that is their whole mission statement. Their formation was fueled by the explosion of social media and the interconnectedness it brought to individuals, and multiple emerging corruption scandals affecting every end of the government, be it Democratic or Republican. Their goal was to make more government data public and accessible to citizens and journalists so that lay Washington outsiders could become key players in the processes of American governance.

Their work has founded hundreds of successful projects aimed at making politicians and bureaucrats accountable for thei actions, and has shown itself to truly be a gamechanger in shedding light on the proverbial rhetorical grayness that most of Washington's functions are based on. Since many politicians are constant actors on the stage of C-SPAN or some other camera, the Sunlight Foundation is brining the script to the front so that citizen may see who is funding what and what money is changing hands.

Are they effective? You decide for yourself.

If the clip doesn't show, here is the link.

The clip you see here is part I of the proceedings from the Blair House summit on healthcare organized by President Obama. From the perspective of CNN or Fox, you only see pundits taking sides on the debate analyzing the rhetoric. From the perspective of the Sunlight Foundation, you see who is funding which politician, when they are up for election, how much money this politician has received from special interest groups, and so on. The entire script – who is really pulling the strings – is brought into stark relief. Those who watched the debate live were able to participate live, as did analysts from Sunlight, fielding and answering rapid-fire questions side-by-side with the live coverage.

It seems that with technology and interconnectedness like this, corruption has only two options: hide deeper (at the risk of later exposure), or walk away. Obviously, money will always find its way into hands that go looking for it. Perhaps the Open Government movement can produce greater disincentives for people to take it.

Want to participate? Visit the Sunlight Foundation or Public=Online.