Could Port-au-Prince be Rebuilt from Itself? - Shareable
Skip to content 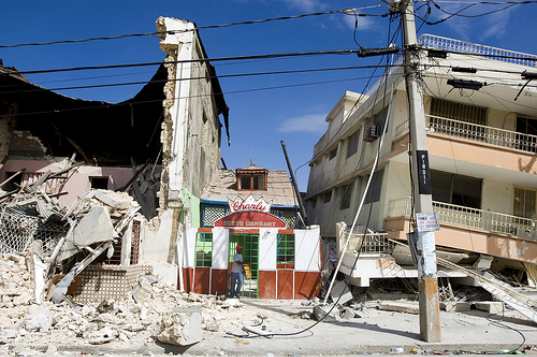 The capital city of Port Au Prince looked like it was hit by a giant wrecking ball. Whatever has been left standing by the 7.0 earthquake and numerous aftershocks is likely cracked beyond repair and will have to be demolished.

Close up shots from news footage reveal low quality concrete, cement and mud block construction. A closer look shows little or no rebar and lightweight wire mesh reinforcement. Port Au Prince, the largest city and principle port, developed slowly from Colonial times on a well laid out grid pattern, but with barely any construction codes or standards. Because it has been a historically poor country, building was done on the cheap. Many structures were also weakened by earlier earthquakes, hurricanes, civil strife and fires.

Greg Moro, operations manager for Independence Recycling of Florida (IRF) has been working on a plan to move two mobile crushing and screening plants to Port Au Prince to recycle earthquake debris for use in new construction. “I have had three groups approach us about going down to Haiti. One is a group from Utah, Proactive Energy Concepts, is working through retired General Leslie Clark to put a package together to go to Haiti for a 10-year recovery program. The first part of their program is demolition and clean-up, providing saltwater desalinization and wind and solar energy. We fit into the early phase of this program and don’t know how long we would be there. They want us to demolish buildings and recycle them into whatever useable products we can make, for example aggregates to be used in new concrete for future development.”

Since the plan minimizes waste, it is both cost effective and sustainable–and this plan reveals quite a lot about the economic of "upcycling," or turning debris into to use:

Recycling construction and demolition materials on-site in Port Au Prince makes better sense. As a remote island nation, importing anything is highly expensive, particularly tons of construction materials. Besides, much of the port facilities were damaged by the earthquake and what remains can be put to more urgent needs.

“From what I’ve heard about Haiti, they are planning to quadrant off the city and move out the population. Companies will go in, scrape the earth clean and build it back up again with hurricane and earthquake resistant structures,” said Moro.

The economics of recycling C&D material vary depending on the nature of the project. The bigger the project, the better the economies of scale and Port Au Prince may prove to be huge. In the United States, recycled aggregate usually costs less per ton than virgin.

“If virgin DOT specified No. 57 stone, ¾ inch rock, costs $20 a ton, recycled aggregate may be $17 or $18. But if you own the debris it’s a completely different story. Recently they were tearing down an old football stadium and called us in to crush on site and make two inch aggregate to use as road base for the parking lot. Doing it that way on-site is much faster and cheaper than buying virgin,” Moro noted.

In Florida, IRF routinely takes concrete highway and house slabs and large chunks from bridge demolition which contains large aggregate and crushes it back into smaller aggregates and road base.

“After looking at the concrete they have in Haiti, you don’t see a lot of aggregate. A lot of it looks like small, pebbly stuff which is very well suited to sidewalks, house slabs and many other building applications that use pump mix. We can crush it down to any size. They will have to decide what they want to use it for,” said Moro.