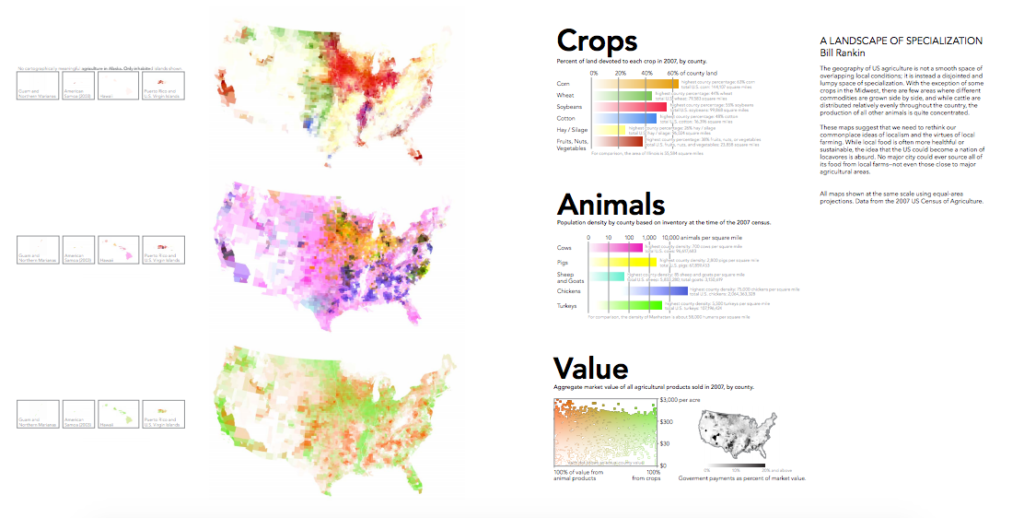 The California-based nonprofit group, Guerrilla Cartography, is set to publish its second collection of crowdsourced maps, called  "Water: An Atlas." The group's first atlas project, which was published in January of 2013, was geared at the global distribution of food. The project, "Food: An Atlas," explores the geography of food. It is vibrant and covers a number of topics, including "The World According to Chile Peppers" and "Food Insecurity and Indigenous Communities in Canada's North."

Guerrilla Cartography, which launched in 2012, was founded on the idea that cooperation and knowledge-sharing "could have a transformative effect on the awareness and dissemination of spatial information."

Molly Roy is a co-founder and board member of Guerrilla Cartography, and she says their method is different from the traditional process of atlas making, which can be a rigid and lengthy process. The Guerrilla Cartography atlas books showcase content crowdsourced from mapmakers around the world.

"The crowdsourced content is curated by the contributors themselves," Roy says. "Whatever is going on in the world right now, that is what the atlas becomes." She says that a traditional atlas is typically made by a handful of cartographers who are working with a single mindset: "The publisher usually has a strong say in what can be included. With [crowdsourced content] there is just so much room for creativity and collaboration. The process is dynamic and there is a lot of learning — it's less top down." Roy is also a professional mapmaker who runs her own cartography business.

Darin Jensen, the group's co-founder and president, says he's excited about the many different ideas showcased in the upcoming water atlas — some maps show water as a resource, while others show it as a physical place and a habitat.

"Life on our planet is dependent on water," Jensen says. "Water separates people and it can bring people together. I've been amazed by how much thinking there is around the way people use and abuse water."

The atlas will include more than 80 maps cooperatively produced by volunteer mapmakers from around the world, and it will show "water trends, usage issues and global events." In a release, the group detailed some of what map readers can expect:

"Now in its final layout phase, 'Water: An Atlas' brings together maps and data  visualizations of physical, political and even imaginative water phenomena. Topics featured in the atlas include North Korean drought and flooding patterns, the Dakota Access Pipeline, disappearing lakes in Bangalore, and potential water savings in California through the use of aquaponic systems."

The water atlas project started back in 2015 when organizers made a call for submissions. Now, the group is in the final stages of a Kickstarter campaign to cover the costs of printing and binding the atlas. "Food and water are the two fundamental requirements for human survival," Jensen says. "We had done food. It was fun and successful, and it just seemed like water was a topic that we could take on."

Crowdsourced cartography is not an entirely new concept. There's a growing ecosystem of crisis maps that rely on crowdsourced content. Many of the mapping tools are built by open-source developers, like Ushahidi, FrontlineSMS, and CrowdFlower, and have been employed in the aftermath of disasters to help emergency responders.

For example, after the January 2010 earthquake rocked the Haitian capital of Port-au-Prince residents were scrambling for clean drinking water, food to eat, and even shelter. Emergency responders and aid workers came to Port-au-Prince in droves, but many didn't know where to go or what to bring. A text message hotline was set up so residents could request help, and the information was compiled on Openstreetmap.com.

There are also a number of academic reports that consider the benefits of crowdsourcing cartography. In a 2013 report, Martin Dodge, a geography professor at the University of Manchester, and Rob Kitchin, of the National University of Ireland, wrote that crowdsourced maps provide a valuable disruption to a business that can be expensive and bound by "complex licensing deals, expensive recurrent subscriptions models, and restrictive copyright clauses."

As for the Guerrilla Cartographers, the idea of crowdsourced, bottom-up atlas is relevant and interesting, but it doesn't answer the question of the financial sustainability of mapmaking as a profession, Dodge says. "You would still like to get these professional cartographers to get paid," he says. "One of the underlying problems with these projects is how to get people to pay the mortgage."

The same holds for a project like Openstreetmap. Dodge says the group has proved that the Wiki-map works, but it has now entered a problematic phase of trying to sustain the model. "The novelty has died down," he says. "But how do you keep the wiki-type project sustained? Openstreetmaps exists and it works — companies use it and governments use it — but how does it go forward?"

It should be noted that Guerrilla Cartography is crowdsourcing an atlas of maps, which is different from the Wiki-maps that showcase crowdsourced content. Each map in the Atlas has been carefully crafted with a unique style and viewpoint. Jensen agrees that crowdsourcing cartographic content for financial gain is "a terrible practice." While contributors are not paid for their work, Guerrilla Cartography is not making books for profit.

The atlases are free to download and for others to reuse for noncommercial reasons, he says. The books are priced only to cover the local cost of printing. "Put bluntly, we aren't making money off other people's work," he says. "We see it as giving them a forum for showing and sharing their work."

"The book designer, graphic artist, book layout, essayists — all aspects of the book content and production are freely given in the spirit of collaborative knowledge-caching and sharing." The water atlas is supported by a grant from New York City's J.M. Kaplan Fund, and any extra money will be used to provide atlases to schools and libraries.

So, which map is Jensen looking forward to most in the new atlas? He says he's thrilled by the maps in the imagination chapter. "The map about locating Atlantis is so beautiful," he says. "It marries mythology with research and data points. It is a 'real' map because it shows geography and puts data on a map, but it is also a subject matter that is possibly lore, or possibly only lore, but it could be more."