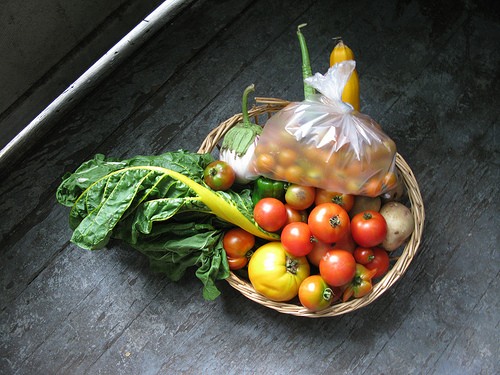 As reported by Twilight Greenaway: A University of San Francisco professor assigns her students to increase the sustainability of a corner store called the Save More Market in the city’s diverse, low-income Western Addition neighborhood. Their nifty suggestion:

Rather than installing a new refrigeration or shelving for produce, as is often done in corner store “conversion” efforts, the students chose to help make Save More Market a pick-up point for a local Community Supported Agriculture box. This model would allow for families in the area to commit to buying produce direct from a farm ahead of time, alleviating the pressure [on Salfiti] to sell fruit and vegetables one piece at a time.

“While he wouldn’t be able to personally sell the produce,” reads the blog created to document the students’ process, “neighbors would have to come to his store to pick up their goods, which would potentially roll in some business.”

The group found a local organic farm, called Eatwell, with a CSA and set about marketing the idea to the store’s regulars. Salfiti’s buy-in turned out to be crucial. “Because they usually knew and trusted him, people [were] more willing to listen to what we had to say,” recalls [student Sarah] Wells.

The students recruited an initial round of families and raised awareness among others. Wells left with an expanded vision about the possibilities of healthy food access. “If all the corner stores in San Francisco had a local farm they were working with, customers would be exposed to seasonal produce and start to think about all their food purchases differently,” she says.