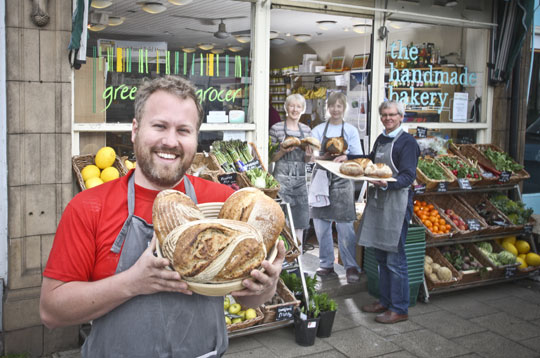 The Handmade Bakery, a cooperative business in the UK. Source: UK Coops

Dave Boyle, a UK-based cooperatives expert, wrote in Economia last March on “the strange re-birth of co-operatives in Britain.”

The article cited research conducted by Co-operatives UK, which documented the superior performance of Britain’s co-ops throughout the recession.

Among the organizations’ findings:

Add to this, being a cooperative owner-employee may even help you live a longer life.

Boyle writes about the findings of David Erdal, author of Beyond The Corporation: Humanity Working. Erdal found that life expectancy for Italian citizens in a town with a high degree of cooperatives was 2.5 years longer than that of citizens in a nearby town without cooperatives.

When Erdal mentioned this finding to a chair at UK cooperative retailer John Lewis Partnerships, Boyle writes, these findings were confirmed—John Lewis' "partners" (their word for employee-owners") lived longer than their peers employed by other, non-cooperative retailers. The organization had to revise its actuarial tables.

With life expectancy in the United States lagging behind that of other developed nations, and is even declining for poor, white women, that’s one to chew on.

And having a stake in your fate is empowering; powerlessness has been shown as a risk factor for disease.

As co-ops provide a high quality of life for their employee-owners, the employee-owners are, in return, more productive.  Democracy in the workplace was shown to increase productivity by nine percent, and co-op employee productivity went up 33% over for years compared to 17% in conventional businesses.

It’s a back-to-basics philosophy; when people have a stake, they feel more empowered, which makes them healthier and motivated to work harder.