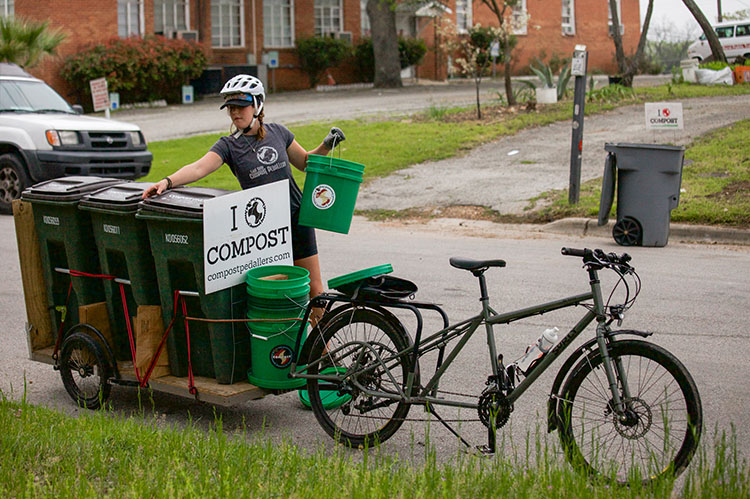 Here’s the problem: Around the world, 1.3 billion tons of food is wasted each year — an estimated one third of the world’s food supply, according to the Food and Agriculture Organization of the United Nations.

This not only causes significant economic losses, but also has detrimental impacts on the environment. Food waste occurs not only on the industrial level, but also at restaurants and households every single day. A significant amount of food waste finds its way into landfills, producing vast amounts of methane, a highly potent greenhouse gas that contributes to global warming. Meanwhile, there is growing demand for organic compost from community gardens and urban farms. It’s a complex, global challenge. How can we address it on the local level?

Here’s how one organization is working on the problem: Compost Pedallers is tackling the problem head-on by taking discarded food and turning it into a beneficial resource for local communities. Compost Pedallers is a 100 percent bike-powered compost recycling enterprise in Austin, Texas, that collects compostable organic waste from homes and businesses and takes it to local urban farms and community gardens. This integrated approach reduces food waste and creates compost for urban agriculture, which strengthens local food systems and fosters social connectedness at the neighborhood level.

The group’s fleet of cargo bikes are outfitted with three 32-gallon bins. Each bike can carry 500-800 pounds of food waste. Pedallers engage the community by polling neighborhood residents to determine which areas they should serve. The organization also has a rewards program called “The Loop,” which lets composters earn points that can be redeemed at local businesses for seasonal produce, drinks, and yoga classes.