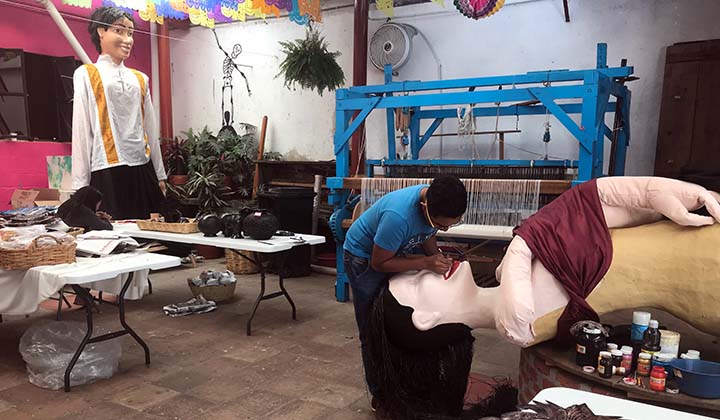 La Casa de las Artesanias is a cooperative in Oaxaca that aims to empower craftspeople and preserve the rich traditions of Mexican folk art.

The colonial city of Oaxaca in central Mexico is famous for its craftsmanship. The area’s indigenous culture is stamped in the handiwork of its citizens, whether it’s hand-carved black pottery, woven blankets, embroidered clothing or intricate woodwork. For decades, the cultural richness of Oaxaca has attracted tourists from all over the world.

But there’s a dark side to the sunny heritage city: The state of Oaxaca is one of the poorest in Mexico and faces persistent social challenges including forced migration and low-paid labor. More than 76% of the state’s residents live in extreme poverty, and only 5% of Oaxaca’s indigenous population ever reaches higher education. It’s a more sobering snapshot than the photos of the city’s bright plazas that appear in guidebooks.

But Oaxacans are fiercely proud of their culture, and they’re working hard to protect it. For the artisans of La Casa de las Artesanias — a collective of more than 50 families that all specialize in different crafts — art and cooperation offer the beginnings of a more sustainable future that is still grounded in local tradition.

La Casa de las Artesanias opened in 2001 with the simple mission of giving artisans the means to make a living while preserving their heritage. The collective draws on the ancient Mexican values of community responsibility, slow living, and sustainability. But it also utilizes the reach of the internet and global tourism to sustain itself: The collective is active on social media and has been featured in travel magazines worldwide.

In this way, La Casa is an impressive model for community solutions to poverty: The artisan vendors have the power to make decisions about their art and culture on their terms—as artisans, as business-people, and ultimately, as Oaxacans. The cooperative shares costs and profits, but also offers its members opportunities for creative collaboration and skills training. As in many tourist towns, craftspeople in Oaxaca must cater to visitors’ interests to survive, but the collective has allowed artisans to preserve their local styles and traditions.

The Casa itself is a vast, rambling building with a courtyard in the back where the artisans hold meetings and make decisions, as well as hosting educational workshops, fiesta celebrations, and other community events. Inside, individual rooms are home to hundreds of different types of Mexican crafts, all made by collective members. Each artisan contributes their wares, but they also work in each other’s rooms selling.

In a gallery filled with black Oaxacan pottery, I meet Manuel, a man in his eighties, sitting in a chair in the corner. The pieces in this room are not his, he tells me in Spanish; another collective member made them. But he thinks they’re beautiful and enjoys selling his colleague’s work in the afternoons.

Manuel’s specialty is tapestries and woven blankets, hand colored with local dyes. I ask him how he learned, and he laughs: “This is what my family has always done: My father, my grandfather, my uncles, all of them. They taught me when I was very young.”

I ask if any of his children or grandchildren plan to go into the family business. “Of course,” he replies, revealing a gap between his two front teeth. “My son has, and my grandson is learning.” He explains that one of his granddaughters didn’t want to become a craftsperson and chose university instead. “That’s alright too. It’s her choice. The crafts give us freedom, especially when we work together,” he adds.

Alone, Miguel says, the artisans of Casa de Las Artesanias would not be able to afford the rent on stores to sell their work. He thinks they would have only small stalls or have to wander the streets of Oaxaca with baskets of their wares. At La Casa, the artisans can charge more, take on more space, and support one another by sharing the profits. In doing so, they keep their local traditions alive — and share them with a wider audience.