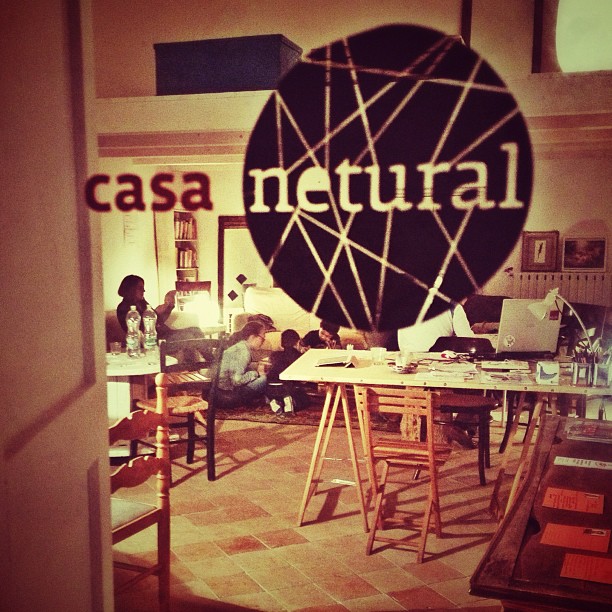 Is it a house? An office? A meeting place? A community space?

Casa Netural, in the Italian city of Matera, is all of the above and much more. It's the first collaborative, coworking space in Southern Italy’s Basilicata region. An experiment born through passion for social innovation, creativity and the need to develop a sense of community, Casa Netural has become the poster child for change in a rural setting. (Netural isn’t a typo, it stands for rural networking.)

Encapsulating the principals of coworking and the spirit of rural living, Casa Netural is a project directed at building the Basilicata brand from the inside out. In essence, it is an unassuming, typical Italian stone home set in a small “vicinato” or courtyard environment. But even this social unit ambience resonates with the themes of the space by encouraging interaction among the residents and a shared approach toward overcoming challenges and everyday life.

A Collaborative Space that Evolves with Its Community

Casa Netural is a blank canvas on which locals and visitors are prompted to design a more sustainable future for the region. This can be achieved in a multitude of ways. By doing, by teaching, by learning or simply by discussing what the issues are and brainstorming possible solutions. The space is warm, inviting, steeped in heritage but fresh and modern in its flexible layout. There are couches, tables, a kitchen, Wi-Fi, reading material, whiteboards, pens and pencils to literally facilitate discussions, meetings and networking.

But what Casa Netural offers as a physical space does not stop there. It is an evolutionary place where the community is constantly involved in the changing shape of the home, sometimes through workshops to reuse, recycle and recreate furniture and everyday objects that are now spread throughout the room. The people who use the space are encouraged to mold it to enhance their creativity and courage to be social innovators. It is unlike the traditional idea of coworking where freelancers rent a desk in a shared office environment but work independently on their projects. The spirit of Casa Netural is to collaborate—to network with like-minded individuals, building a team of experts from near and far who can offer skills, experience and an alternative perspective.

Matera is of course not the metropolitan center where most people might expect to find a coworking space. It is also not the most isolated or abandoned of towns in the Basilicata region—which is also the focus of the project—but it was the optimal place to start. The benefits of establishing Casa Netural in the UNESCO listed semi-city were two-fold. First, the town already has a great capacity to draw in visitors from near and far because of its spectacular Sassi dwellings. The Sassi and the Park of the Rupestrian Churches of Matera were inscribed into the World Heritage list in 1993 for its preservation of unique homes, cisterns and tombs that were carved into the soft calcareous tufa rocks in the Palaeolithic period. Although Italian authorities endeavored to evacuate the area in the 1950s by passing legislation to dislocate people living in the ancient township, the population resisted and retained the structure and spirit of the city. Today, this means tourism gold with new people, new ideas, new perspectives and in turn, new opportunities in the area. Engaging these travelers in the environment they are experiencing is, of course, a challenge but a critical part of the picture to improve the economic, social and environmental sustainability of Basilicata.

The second reason for picking this location is that it gives local residents a reason to stay in, or return to, Matera. A town that has ample infrastructure and ambiance to support a thriving community, it has traditionally been deserted in search of a more prosperous future. Now there is hope that, through the establishment of a place where forward thinkers can gather, interact, share and create in a flexible environment, Matera will no longer be seen as a wasteland devoid of innovation and profit potential. If people can see that their ideas and projects can not only be born in Matera but they can find the resources, advice and support necessary to launch them, there will be a greater incentive for them to stay. And it’s not just the young up-and-comers being targeted. It is also entrepreneurs and people who have been displaced by collapsing industry who are being inspired to transform their skillsets into a new enterprise.

Although isolated by tourism standards, Matera is the center-point of the southern central Italian region of Basilicata and also has good links to nearby Puglia (the heel of the Italian “boot”) where economic development is progressing. This is also important for the potential of Casa Netural to be realized so that it can be used as a launch pad to explore the area. In the future it is anticipated that Casa Netural will host informal tours of Basilicata, with the assistance of local guides, to show Materans and visitors the hidden gems, undiscovered social innovators and economic possibilities within the south of Italy.

Casa Netural is itself an experiment and a living business plan for coworking and collaboration in regional areas. It will be a model that can later be exported to other rural districts worldwide that are vulnerable to emigration and degradation. An investment for its founders, the project is not intended to be profitable within itself but instead profitable for the community in which it stands. This in turn will draw in more members for association, making it self-sustainable and the product of the collaborators who use it. The goals are for the community to understand its strengths and available resources, to create a sense of empowerment and also a more participatory approach to fostering a sustainable future outside of metropolitan centers.