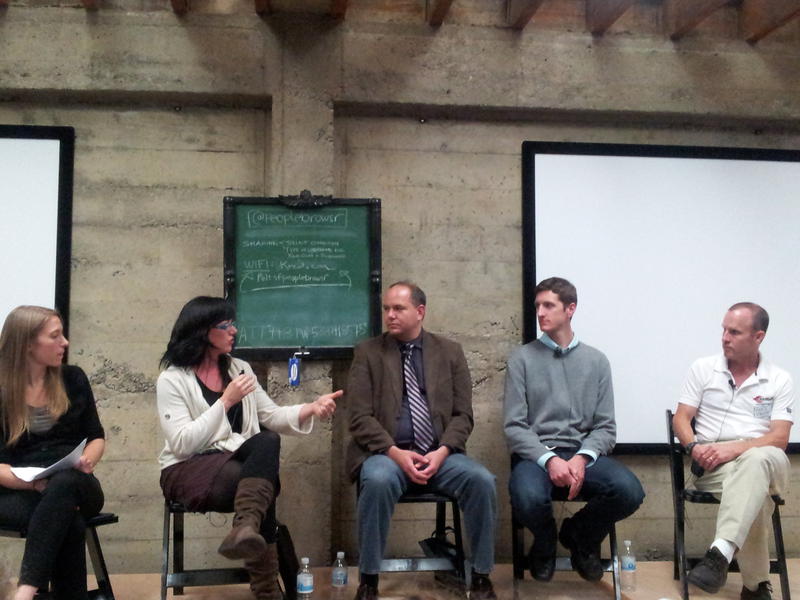 This month’s Collaborative Chats explored the world of peer to peer goods sharing services. While everyone loves the concept of sharing underutilized household items, these platforms have had a challenging time gaining traction. Throughout the evening we explored the challenges, lessons, and future of goods sharing. Joining the conversation were:

Below are some reflections from the evening, and check out video of the discussion at the end.

What are the Biggest Challenges Facing Peer to Peer Goods Sharing Companies?

The conversation started by discussing the challenges of running a peer to peer goods sharing service. Micki said that when a lot of these services started a few years ago, people assumed that financial transactions were the only type of transaction that would draw people to share. Turns out people don‘t share household items for financial gain alone- it’s simply not the same return on investment as sharing your car or home. It’s a lot of work to post an item and take a picture, just to let someone use your power drill. She’s learned that the value for people who share their stuff is actually the social transaction and return. She reminded us that there are lots of ways that we transact with each other every day, like taking someone out to lunch in exchange for advice, that don’t involve a clear financial exchange but we still perceive them as valuable. She thinks that the challenge for the industry now is to figure out how to get people to pay for the value they receive through the social transaction of sharing.

Tim from Getable felt like the initial challenge for the industry is inventory of goods. When people are able to access a good they need immediately and seamlessly they’re more likely to rent or share in the future. That’s why Getable partnered with traditional sharing businesses like rental companies, to ensure a reliable transaction with guaranteed inventory of what people actually need to share. Micki challenged this assertion by pointing out that on NeighborGoods they have the opposite challenge – lots of inventory and people willing to share and not enough people wanting or looking to borrow, which was fascinating.

Is There a Cultural Barrier to Renting Goods?
Chris said that his company did a study in which they found the majority of people had no idea that they could rent the things they said they wished they could rent. “We got CostCos and Home Depots and have been told that we have to buy everything when it’s simply not the case”. Tim said that Getable tries to show people just how much is available to them to rent, borrow, and share by aggregating rental sites in one place. But its clear that we all have a lot of work to do to show people that sharing is even an option, and sharing every day items can be a great way to open people up to all the other ways they can share.

Kip shared an insightful lesson learned from his young daughter – People take an action or adopt a behavior, then make up the reason for why they do it afterwards. He suggested that if we can just get people sharing, they’ll make up their own reasons for why they do it, and why its valuable afterwards. Explaining the benefits before they share might not be as important as just getting them to do it and having it be a positive experience. Sharing is a cultural behavior – maybe we just have to focus on practicing it.

New Ways of Thinking of Transactions

Peer to peer goods marketplaces have the opportunity to teach us a lot about why people share and what they’re actually looking for when they share. It’s been the assumption by many that financial reward is what draws people to sharing. That may be true for some, but, as Micki has found, there’s not necessarily a shortage of people willing to share their things – the challenge is finding people who will look for things they need. In essence, there’s no shortage of people who want to help, and the ability to help is valuable to people, but getting people to say they need help, and connecting them to people who want to help them, and monetizing that is the new challenge. Think of it this way – when you borrow a power drill you don’t actually need the power drill, you need a hole in your wall and to hang a picture. What if you could get connected with a neighbor or new friend who would put the hole in the wall and show you how to hang the picture? What if you could help someone hang a picture? That’s where the value may lie for people.

Sharing companies have come to learn that the people we trust the most aren’t necessarily the people who live next to us. Often we’re more willing, and it’s easier, to share with our co-workers, church groups, or sports teams than our neighbors. Community is being redefined by social networks. Neighborhoods aren’t connected, and there’s a question of how much people want them to be. So, looking at groups like college campuses or faith communities, as the new neighborhood might be a more useful approach to finding communities that are ripe for sharing.

How Sharing can Help Governments

At the same time, there is a real and practical need for connected neighborhoods. Kip said that connected communities that are already networked and sharing are the most likely to be resilient when disasters, economic or environmental, strike. You don’t want to introduce yourself to your neighbor for the first time as your house is falling down after an earthquake. Governments need communities to be connected to help them provide services in an efficient way after a disaster. In this way sharing could be seen as a public safety tool that should be used and promoted by local governments.

Due to financial constraints governments aren’t going to be able to provide all the services they used to in communities, but that also means they’re looking for new external parties that can help provide those services. Interestingly, governments and the Sharing Economy both seek to fill the needs of people that have been ignored by the market – perhaps there’s a way in which we can collaborate that’s mutually beneficial in that goal.

The idea also came up that Governments, which are communities in and of themselves, could benefit from using sharing platforms to keep track of and distribute their inventory of everything from trucks to projectors in a more seamless way.

The Future of Goods Sharing

While goods sharing services have had their challenges, they’ve also learned a lot, and the future looks bright. The panel imagined a world in which people created local experiences together, creating more vibrant communities. Kip shared that he used NeighborGoods to get neighbors to remove 400 pounds of fruit from his property and take it to a local food pantry – saving him money and taking his excess food to a place where it was needed. Sharing could help raise community capacity and show people that there’s already enough wealth and stuff, in their communities. Tim said that his goal is to make sharing sexy and seamless, like going into an Apple Store. He’d like to see market places in which people help you pick the product you need, show you how to use it, and can guarantee that it will work seamlessly.

Goods sharing services are at the front line of the Sharing Economy. We all have a lot to lean from the challenging lessons they are facing including figuring out first hand why people actually share. When they do learn how to make the sharing of stuff work, every in the sharing economy will benefit.