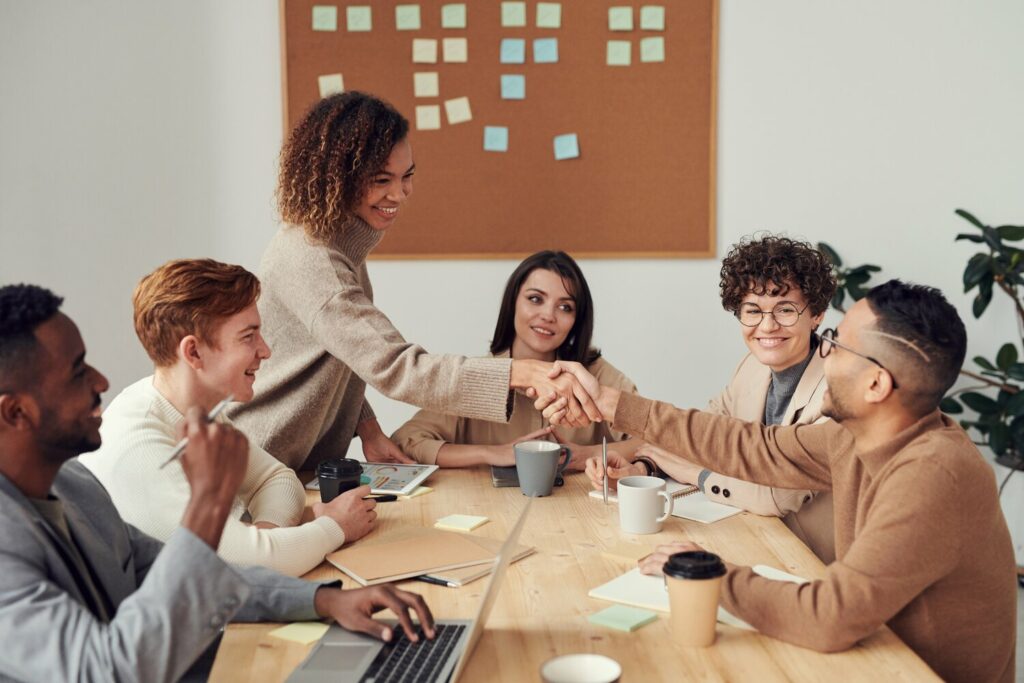 The United States is home to 30,000 cooperatives, or co-ops, businesses owned and managed by the people who produce and consume the goods, products, or services they offer.

The cooperative model serves as an alternative to traditional capitalism and has the potential to open doors for individuals and communities who may have historically been excluded from opportunities to generate wealth. Research suggests cooperatives may indeed be the key to building a more equitable, sustainable economy. But how can new co-ops get the support they need to get off the ground, grow, and thrive? One organization is working to answer that question.

Formally known as Cooperatives for a Better World, Start.coop was designed with cooperatives — and their members — in mind. Start.coop’s mission is to “cultivate the next generation of cooperative businesses at scale…” To do this, the organization has three primary programs: an incubator program, an accelerator program, and design and coaching services.

To this end, Start.coop has also established a sister organization, The Equitable Economy Fund. A pilot fund of $2 million, The EEF was designed to match angel investors to co-ops to ensure said co-ops have the capital they need to succeed within the shared ownership model.

Co-directors Greg Brodksy and Jessica Mason are the driving forces behind both Start.coop and The Equitable Economy Fund. Brodsky is a seasoned start-up and co-op strategist and founder and co-director of the accelerator program. He also runs the Equitable Economy Fund. Prior to his current role, he founded the Bike Cooperative and helped launch the nation’s first purchasing co-op for craft breweries.

Like Brodsky, Mason’s work centers on helping co-ops address the challenges associated with shared ownership head on. An angel investor herself, she previously was the founder of The Social Impact Studio. In addition to her work with Start.coop, Mason is on the faculty of Foster America (an organization that sponsors a fellowship program to equip the next generation of child welfare leaders) and is a board member of the artist-owned cooperative Ampled, which previously benefited from the resources offered by Start.coop’s accelerator program.

The programs in action

The Equitable Economy Fund is a pooled investment fund exempt from registration with the SEC. As such, only accredited investors are able to invest in the Fund. Investors have access to a diversified portfolio that contains several different cooperatives, as well as other shared-ownership companies — all of whom are graduates of Start.coop’s accelerator program. If a cooperative or shared ownership company shows exceptional potential, then accredited investors have the option to invest more in a subsequent round (known as follow-on capital).

Start.coop’s annual accelerator program is based around a cohort model. Over the course of 16 weeks, the virtual program offers coaching, mentorship, platform service access, and an investment of $10,000 per team. Graduates who are considered high-performing are eligible to apply for $50,000 in follow-up funding. Eight companies were selected as part of the most recent 2022 accelerator program:

In putting forth its mission, Start.coop recognizes that “only a tiny fraction of the 30,000 co-ops in the United States are Black-owned”. With its focus on funding cooperatives owned by women and people of color, Start.coop is dedicated to ensuring that these often-excluded cooperatives have the resources they need to thrive. Funding recipients’ missions often address pressing issues that are often overlooked by traditional accelerator programs, but can have real implications for marginalized people and communities. These include the rise of the gig economy, the exploitation of workers in fast fashion, the rise of fake news, and the skyrocketing cost of housing.

In 2020, Y Combinator (a well-known American technology startup accelerator who Start.coop has been compared to) released data on the diversity of the companies it funded. Of the nearly 200 companies hosted in their summer 2020 cohort, only 16 percent o had a woman founder and only 9 percent had a Black founder.

With the Equitable Economy Fund, Start.coop hopes to paint a different picture for the future of funding. Noting in its mission that historical inequities in access and capital have stifled marginalized communities’ ability to thrive in traditional (and cooperative) economic spaces, Sart.coop says it is working “to address systemic racism and the root causes of inequality.”

Several startups have benefited from both Start.coop’s accelerator program and the Equitable Economy Fund. Two “alumni” include Obran Cooperative and UPROOT Homes. Obran Cooperative is a worker-owned staffing company with a focus on empowering people of color, including formerly incarcerated individuals. One of its two brands is Core Staffing, a staffing agency for returning citizens (people who are returning to society after being released from prison). Employees work in various industries,including food processing, light manufacturing, and warehouse operations.

UPROOT Homes, recognizing that 650,000 military families relocate every year, is dedicated to helping these families access homeownership and its financial benefits. UPROOT allows a succession of short-term homeowners to pay down a mortgage together and all access the long-term benefits of having a paid-off home.

Speaking to The Rework Podcast, Start.coop’s co-director Greg Brodsky says, “…a lot of our business curriculum might look like Y Combinator, or 500 Startups. But the two pieces that look really different are the governance aspect, and then the fundraising aspect. [When you invest in cooperatives] the goal is to create long term ownership within that community, whether that community is workers or consumers or farmers or musicians.”

In this way, Start.coop and its Equitable Economy Fund are determined to help cooperatives,and the often-marginalized communities they serve,hone their potential and find their footing. Brodsky continues, “We’re not trying to sell the company; we’re trying to bring that company wealth and voice.”