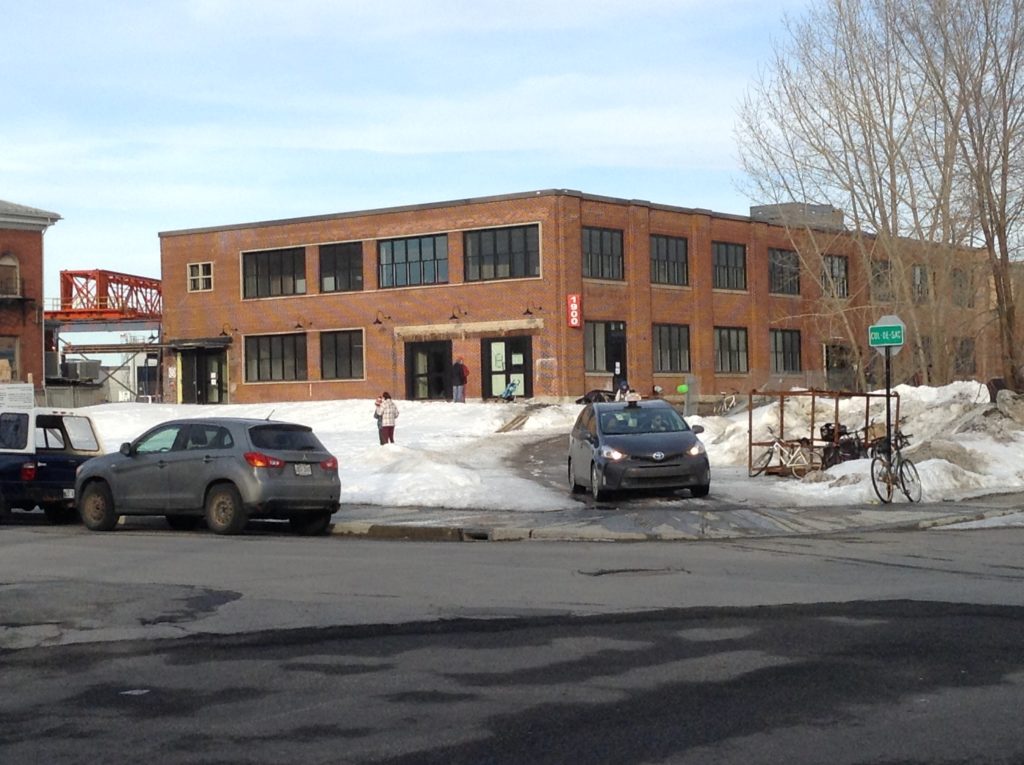 It's a Sunday morning at Bâtiment 7, and the sprawling former railroad warehouse in the Pointe Sainte-Charles area of Montreal is a hive of activity. A children's art class is in full swing across the hall from a grocery co-op volunteer meeting. Volunteers in rubber boots clean vats inside a closet-sized microbrewery, while a few feet away, students at a local art school celebrate an opening with juice and cookies. Earlier, someone had the foresight to scrape the gender markers off the downstairs bathroom doors. Everything is going to plan. A university student from Switzerland sweeps the common room floor, singing an old Catalan sovereignty anthem, "The Stockade," with its stirring lyrics about pulling together to bring down an unjust system.

When Caroline Monast-Landrieu, a recent university graduate, longtime Pointe-Saint-Charles resident, first walked in to the building two years ago, that buzz of activity was entirely absent. "There was no one here, nothing," she says. The vast brick building, formerly part of a huge railroad warehouse complex, had sat empty for decades. A developer bought the crumbling property from the City of Montreal for a dollar to build a conference center, to the displeasure of a core group of local residents who had been eying the building for years, hoping to turn it into a community space. "You know those breeds of dog that, when they bite down on something, are physically unable to let go?" says Natacha Alexandroff, a founding member of the collective. "That's us."

"We found it inadmissible that an outside promoter could have this property for a dollar, when the community, including people whose families had worked for generations in the shops, couldn't," Alexandroff says. "We woke up one morning and found that they were starting to demolish the building, so we formed a 'crisis cell' that became the first Bâtiment 7 collective." When the planned convention center was called off years later, the crisis cell became an action committee. With pro bono architects and a construction team including people who had gotten their building trades certificates specifically to work on the project, the all-volunteer collective set to work. "We didn't get just a building out of this process, we got people who can work… I can't talk about it without getting emotional," says Alexandroff, holding back tears.

Bâtiment 7 opened to the public in May of this year, still entirely staffed by volunteers. The large complex houses a bicycle workshop, a car repair garage, a woodworking workshop, a co-op grocery store, a library and event space, a bar and a tiny microbrewery — and that's just the ground floor. The second floor reveals ceramics, metalworking, screen-printing and digital printing workshops, as well as a darkroom, a sprawling common room, a branch of a neighborhood art school and a youth-run, queer-positive game room managed by a local youth group. Each facet of the project is managed by a different collective or community organization. An art gallery is expected to open in an as-yet-unused wing of the building. The project’s organizers are starting to dream bigger, writing out plans and raising for a daycare center and a birth house in concert with existing local organizations. The project has been funded by donations, government subsidies, and a micro-loan system.

Monast-Landriault and the collective are careful not to overstretch their capacity with the multifaceted project: "We're going step by step, depending on where our energy levels and our finances are at any given moment."

If the lines at the cash register are anything to go by, the cooperative grocery store is an especially welcome addition to the neighborhood. "We live in a food desert," says volunteer Gabriel Sevigny, who is working the cash. Sevigny has followed events at Bâtiment 7 for more than ten years. "The [supermarket] is a 20-minute walk away, and it's excessively expensive. Here we work our butts off to find deals through bulk providers — deals that allow the group to offer vegetables and dairy products at excessively low prices. We want to prove that community-run, affordable places like this are possible," says Sévigny. 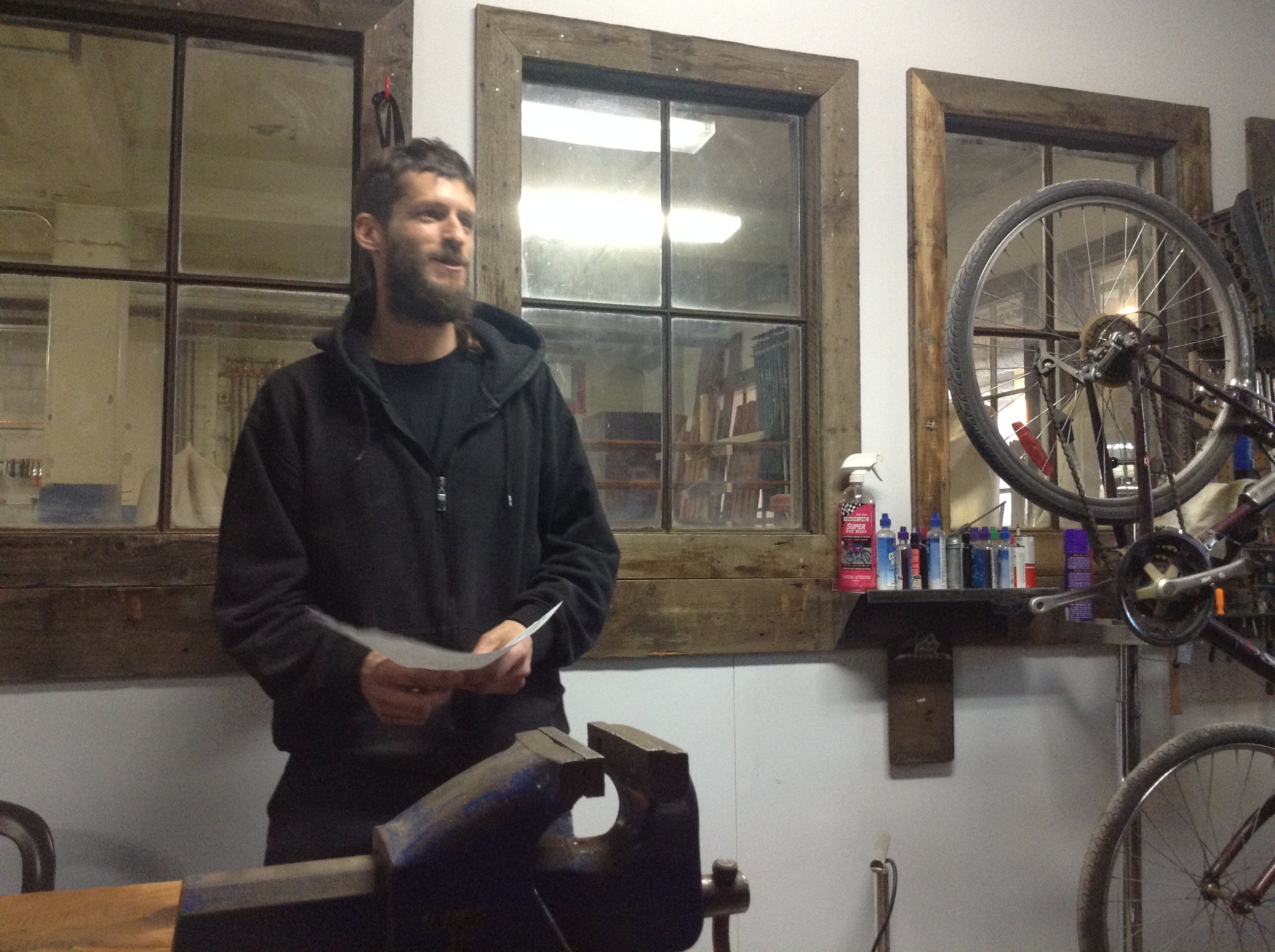 "I thought it was great to be able to participate in a collective project that could become anything," Monast-Landriault says. "It lets us take ownership of the means of production in a way that we usually can't in the rest of the world. Normally, if your car breaks down and you take it to the garage, they repair it and you pay the bill. But here, you can spend time with our volunteers and learn to do it yourself." Each workshop is run by a separate cooperative,  accessible for a scaled hourly, daily, or monthly fee depending on the cost of maintaining the equipment and how frequently the user plans to go there. The workshops are overseen by trained volunteers like mechanic Jonathan Dionne, who teach their craft in exchange for a discounted user fee. "Anyone who wants to come and work on their car, or their scooter or whatever, in the neighborhood can do so, and we'll teach you how to use the equipment safely. We want the workshops to be accessible and diverse… we’re not here to do cowboy capitalism, there has to be some kind of social value added."

The once-disintegrating CN workshops will soon be humming with activity every day and night. "We're not anti-development," Sévigny says. "We want to be the development."