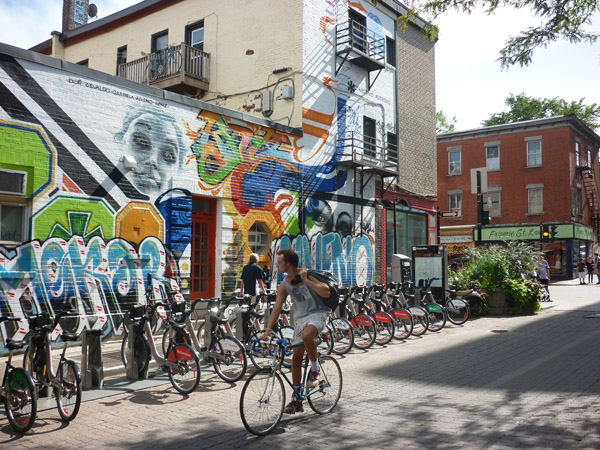 Last year I visited Montreal to attend the Ecocity World Summit, a biannual gathering of visionaries from around the globe committed to creating cities where people live in mutually enriching relationship with each other and with the Earth. Looking at cities as living breathing organisms, with all their residents — human and non-human — forming an intricate web of interdependence, the very idea of an ecocity is rooted in a sharing principle, where citizens understand not only the physical value of making the most of our natural resources, but the cultural, spiritual, ecological, and ultimately, economic value inherent in building networks and communities.

As usual at conferences, there were a lot of inspiring speakers, panels, and workshops, but when you’re talking about cities and the people who make them what they are, there is nothing quite like venturing out into the urban jungle with your eyes and mind wide open. So I signed up for a few mobile workshops, got busy scouting bike maps, put on my walking shoes, and started searching for the people and places that make up the social fabric of Montreal. What I found was a sharing spirit that wasn’t just evident in the many organizations and programs promoting community participation but a palpable “we’re in this together” mentality emanating from street corners everywhere.

In my experience, how easily you can interact with one another in the street and how quickly and safely you can get around are good indicators of how far along a city is in becoming more ecologically healthy. While Montreal has a successful car sharing program and is poised to launch a taxi sharing service, the thing that immediately stands out are the Bixi bike sharing stations at every corner and the swarms of casual riders on the spiffy silver bullets buzzing through an elaborate network of separated bike lanes. For an $80 annual membership, locals get to use Bixis free for up to 45 minutes per ride, and if you’re visiting you can get a 3-day pass for $15. You can pick up and drop off one of the over 5000 Bixis at any of the 411 stations all across town,and you never have to walk more than five minutes to find a bike. 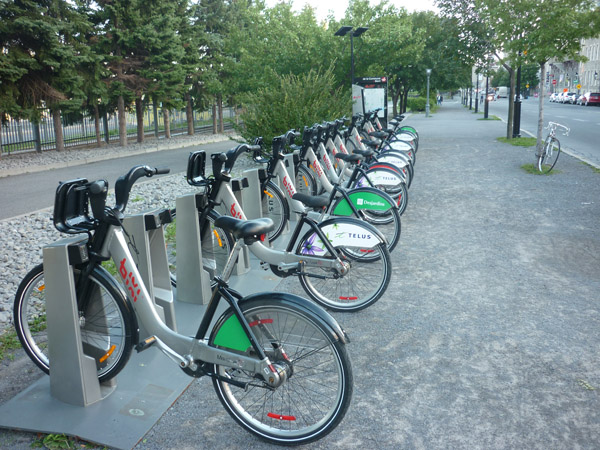 My first initiation to Bixi is through the Bikeable Montreal mobile workshop, led by Marc Jolicoeur. Jolicoeur is research director at Vélo Québec, a non-profit that has brought the local cycling community together for over 40 years and was instrumental in creating Route Verte, the Green Route, a 4000 kilometer system of bike paths linking together all the regions of the province. As we’re riding on luxurious separated bike lanes just east of McGill University and past beautiful Mont Royal, Marc explains how the investment in safe bike lanes has had a huge effect in getting Montrealers out of their cars, with over fifty percent of people using their bikes as a means of transportation, more than doubled from 2000.

Speaking to the power and fun of a shared experience that not only eases urban worries of parking or theft but also makes everyone feel like they are part of something bigger, at our next stop Marc talks about how Bixi has sparked what Montrealers lovingly call a “vélorution”. Since its inception in 2009, the upright cruiser bikes with the step-through frame, fenders, wheel-powered lights, and front basket have completely won the hearts of locals and visitors alike. In 2010, Bixi had tallied 3.3 million trips, three times more than the year before. 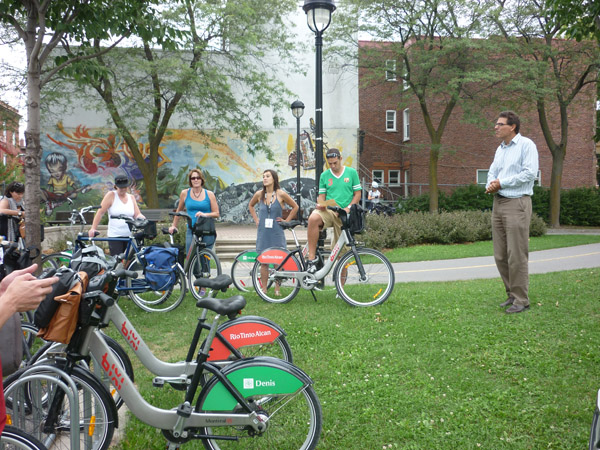 After traversing the northern fringes of town, we return through the Plateau neighborhood and make a pit stop at Maison des Cyclistes, the nerve center of Montreal’s cycling culture at the intersection of the Rue Rachel and Brébeu bike paths. If there’s a bike heaven, this is it: a sea of parked bikes glistening in the evening light, a steady stream of bike commuters chit chatting on their way home, and a cafe full of bike enthusiasts from all over the world, hanging out, exchanging ideas, sharing a cup of coffee and a choclatine on the sidewalk.

The following day it’s time to explore the city’s other crown jewel of shared activity — community gardening. Even before going on the urban agriculture tour with Montreal’s guru on the subject, Ishmael Hautecoeur, I’ve been wowed by all the shared green spaces and gardens visible throughout the Cote-des-Neiges neighborhood where I’m staying. However, getting the scoop directly from Ishmael really brings home just how invested Montreal is in communally-run urban farms. Currently, 98 community gardens are shared by about 17,000 gardeners, and over 100 rooftop gardens are engaged in hydroponic cultivation, permaculture, organic agriculture and collective gardening.

At the heart of the rooftop gardens project is The Edible Campus Garden at McGill University, a collaborative project involving citizens in the creation of green, edible community spaces to distribute food to a meals-on-wheels kitchen and residents of a low-income neighborhood. Two of the non-profits involved with this garden, Ishmael’s Alternatives, an organization fostering social networks to develop shared solutions to shared problems, and Santropol Roulant, a holistic initiative bringing people of all ages, languages, and cultural backgrounds together through urban food systems, signify a common thread — a desire by Montrealers to bond through food, community, and social justice. 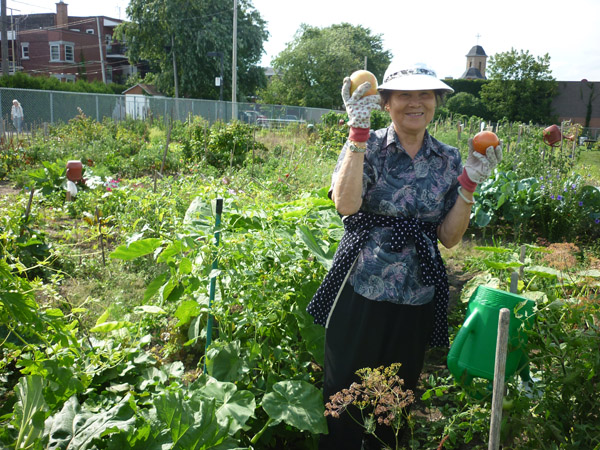 We take the Metro to the Villeray borough and walk to La Maison des Grand-Parents, a senior center similar to Chez Soi, where residents team up with local youth in the rooftop garden to learn and experiment with horticulture techniques and share meals from the fruits of their labor. Next, we walk through the neighborhood’s narrow alleyways where front-yard gardens are exploding with tomatoes, squashes, and vines. Ishmael talks about how having these gardens in plain sight has brought neighbors together not only to share lost knowledge about soil, composting, harvesting, or canning, but to cook together and have supper with each other. One of the home owners who has turned her garage into a community greenhouse and her stoop into a neighborhood “veggie bank” explains that gardening educatespeople. “By gardening as a cultural activity we all relearn those important skills.”

After a stop at the Villeray community gardens, where an elderly gardener hands me one of her beautiful tomatoes, we end the tour at Jean Talon Market, a Montreal landmark since 1933 where local farmers, butchers, bakers, and street musicians keep everyone in good spirits. 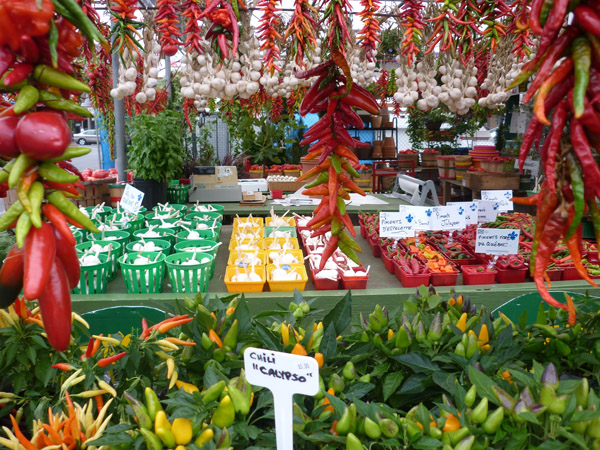 The next day I’m invited to Montréal Urban Ecology Centre, one of the co-organizers of the Ecocity Summit, a non-profit whose mission is to build and share expertise about the most viable and democratic approaches to sustainable urban development. Saleema Hutchinson, Urban Ecology’s manager for education and citizenship, takes me to their magnificent rooftop garden, an educational terrace with lots of climbing vines and a model for an exciting urban agriculture project. Called La Ville en vert, it’s a groundbreaking collaboration between Urban Ecology and the city’s housing authority, Office municipal d’habitation de Montréal (OMHM).

La Ville en vert was inspired by the goal of reducing urban heat islands— cities that are consistently hotter than their surrounding rural areas because of excessive heat-retaining concrete and asphalt — by greening low-income housing complexes, but it’s so much more. By involving residents in the planning, designing, and renovating of their environment, La Ville en vert not only integrates sustainable landscaping practices, such as building green roofs or climbing vines, but fosters a shared sense of citizen participation in these often neglected settlements. Hutchinson describes what happens when people who usually don't have a lot of power over their space become empowered to create their own gardens in common outdoor spaces: “There's real validation in a participatory process where people hear about it, get involved, talk to each other, and build up momentum. One elderly person said she used to be depressed but the garden gave her inspiration and something to contribute. There's a lot of pride in that.”

As I’m riding a Bixi to my Airbnb apartment that night, it occurs to me that the glue of Montreal’s social fabric is really a shared sense of community, justice, and creativity. Whether it’s beautifully painted parking meters repurposed to collect money for the homeless (ParcoDons) or artistic “take something, leave something” boxes of goodwill placed around the urban landscape (Swapboxes), much of the give and take here seems rooted in a soulful quest to make the world a bit more fair, meaningful, and fun, with possible economic advantages as a convenient side effect. You can tell a place is special when the most normal thing in the world is for Leonard Cohen to come out and share snacks and poetry on a park bench. Beyond the usual suspects like swap clubs and co-working spaces and not-so-usual ones like breastmilk sharing, it’s ultimately things like the ubiquitous jam sessions and shared picnics in Parc LaFontaine that give this city its caring and sharing identity more than anything else. 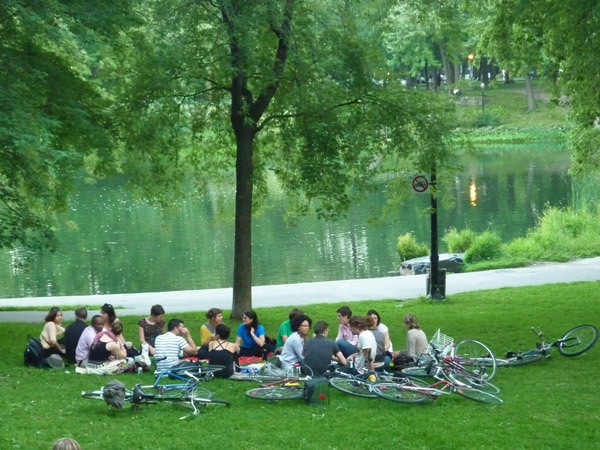 Sven Eberlein is a San Francisco-based freelance writer whose work has been published in Yes! Magazine, Grist, Ode, Sojourners, Alternet, and Planetizen. He’s on the core advisory board of the International Ecocity Framework and Standards initiative, and when not looking for tasty street food and photographing random acts of creativity in his Mission neighborhood, he is blogging at A World of Words.