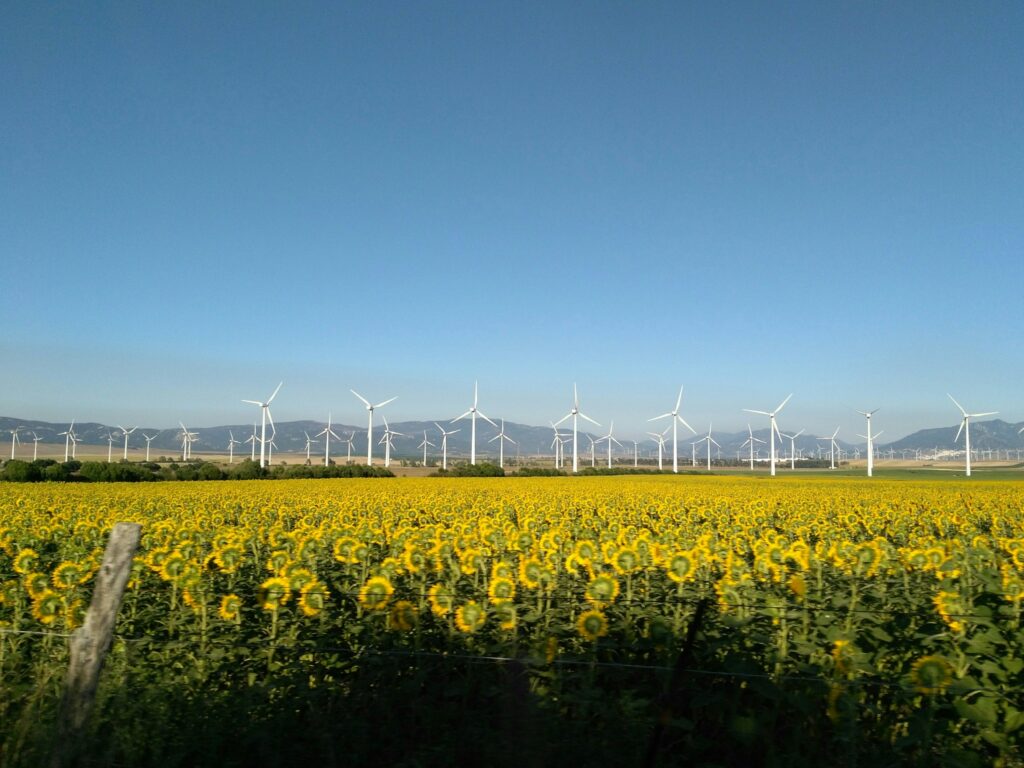 This article was adapted from Bright Green Future, a book that chronicles a global renaissance in people-powered solutions to climate change.

In a decade-long building boom of renewable energy, we’ve reached a milestone. There are now one billion watts of wind and solar installed across the world. That’s about half the capacity of all coal and three times that of all nuclear.

But make no comparisons to the energy past. Unlike fossil fuels that produce a consistent supply of baseload electricity, renewables only generate power one-third to one-fifth of the time. The same logic no longer applies; the task is not to stoke an eternal flame with combustibles pulled from the deep. Our new goal is one of grace. Like Mother Nature, or a Zen master, we must find balance in the forces of night and day.

A new type of grid is needed to handle this balance. It’s a symbiotic energy system that exchanges electricity, similar to how nutrients pulse through tree roots and food webs in a forest. Rather than the current one-way stream of electrons emanating from giant, isolated power plants, this new system will be composed of millions of interdependent sources of generation, storage, and adaptive response. While at first, this distributed network may be more challenging to manage, eventually it will enable a stronger grid that’s less vulnerable to outages and provides dozens of mutual benefits to producers, consumers, and communities.

Clyde Louten is a maestro of this evolving modern grid, conducting the balance of renewables for the state of California. And while today he oversees one of the largest grids in the US, as a kid, he lived through daily outages.

“When I was growing up in the Caribbean, the picture on our 24-inch TV screen would shrink to about 19 inches or just disappear completely. The electricity supply wasn’t consistent,” he says. “Here in the US that would never happen—and if it does, there’s practically a revolt.”

At a young age, Clyde was the one in his neighborhood who knew how to fix the fuses when they wore out. He kept the lights on. Now he works to keep the lights on for the nearly 40 million people in the state of California. One day on the job, he got a call from his six-year-old daughter. The electricity had gone out while she was watching Nickelodeon. He laughs. “She calls and asks me to turn it back on.”

He described his job as a balancing act that’s “like walking on a razor’s edge.” It’s a task that, in the past, was much easier. Before, with centralized energy sources that rarely vary, it was more straightforward to forecast the flow of electricity on the grid. Now, with tens of thousands of solar and wind farms with production varying due to weather, it’s become a challenging game.

He explains it like this to his daughter, who’s now in high school: “Think about driving down a straight freeway at 60 miles per hour with your eyes closed. Every four seconds, you open your eyes to see where you’re going. That used to be easy even five years ago, when baseload energy supply was so predictable. But now, it’s not a straight highway and you’re driving on a winding road of fluctuating supply. So every four seconds, you’re quickly off track.”

Over the course of one hour, Clyde said he’s seen solar energy on the grid jump from zero to 7,500 megawatts. That’s about a third of all the electricity that California uses coming online at once. Clyde referred to this as an “asynchronous grid,” one that’s based on power that switches on and off with the cycles of wind and sun. “We will eventually be very good at balancing it, but this transitional phase is challenging.”

The variability of renewables is one of the fossil fuel industry’s main arguments against solar and wind. It plays into our basic need for security and consistency. As such, the renewable grid requires a new mindset shift on energy management.

That’s why Clyde conducted a test. He wanted to see if renewables could perform like traditional power plants. At a solar farm in the Mojave Desert, he and a team used advanced power controls to carefully regulate the electricity produced. In doing so, they found that solar could provide services usually provided by fossil-fuel plants. This low-cost breakthrough, along with others in scheduling solar generation, may allow us to bring a much larger percentage of renewables online. It could get us close to 30 to 50 percent solar on the grid, without even the need for batteries.

The need for energy storage may work symbiotically with the rise of electric cars. During the workday, when most vehicles are parked, the noon sun creates more electricity than we use in our buildings. Those extra electrons can be saved in our car batteries and be put to use after work as we drive home on the sunshine.

When the sun sets, demand for electricity surges. A chorus of dishwashers, TVs, and appliances rises in the evening as solar generation drops off a cliff. It’s during this peak that we may call upon our parked cars and their well-fed batteries to share some supply with a strained grid. They release their stored sunshine, lighting homes across a darkening horizon. As twilight fades to night, demand bottoms out. Prairie winds pick up, charging our cars as we dream. In the morning, we drive to work on the breeze.

This technology, in which electricity flows the other way from cars to grid, is known as “vehicle-to-grid” or V2G. It was largely theoretical for several decades. In 2018, pilot programs in the Netherlands, United Kingdom, and Germany have shown that it works. Importantly, the fears around battery degradation have been calmed by tests that show Tesla batteries can run for over 300,000 miles and still work at 85 percent capacity.

Other studies reveal the yet untapped potential of V2G. It’s estimated that one million electric vehicles with a range of 200 miles would be enough to back up the entire California grid with energy storage. There are currently 15 million vehicles in the state.

V2G may fundamentally change the economics of car ownership. A pilot program in the UK led by the battery company Moixa paid Nissan Leaf owners up to $75 a month for discharging onto the grid. Over the course of the year, that may work out to $900. Every year, the average US household spends $9,000 on transportation. It’s the second biggest expense after housing. Electric cars cost about one-third as much to maintain as do internal combustion cars, and the electricity that powers them is about half the price of gasoline per mile. When we combine these savings with payments from V2G, we may transform one of the biggest costs for families into a source of income.

There are, of course, well-placed concerns that a boom in electric vehicles will spike demand for fossil-fuel power plants. Indeed, the current centralized grid treats every increase in load as a need to generate more power. In a symbiotic energy system, however, more electric cars may actually expand storage for wind and solar, evening out their variability. In addition, at the end of the battery’s life, when it’s no longer strong enough to power a car, it’s still far from useless. It may find a second life as stationary storage on the grid. The electric bus company, Proterra, estimates that its vehicle batteries could last another ten years, providing back-up for the grid. Every electric car made today is potentially more storage to balance renewables tomorrow.

Managing the supply of energy isn’t everything, though. Demand is a strong pillar in balancing the clean grid of the future. We can respond to critical times of high electricity usage and lessen the burden on the overall system. In programs known as “demand response,” utilities pay businesses and homeowners to reduce electricity use on peak hours and days. Pool heaters, fridges, and air conditioners can be programmed to respond to fluctuations in power demand. Everything that’s connected to the grid can work together as a decentralized network. As the operators of those devices, we may earn money for helping to reduce strain on the overall system. Several major utility companies already offer discounts for participating in demand response.

As we sharpen our ability to store, manage, and use energy, the nature of the grid itself is changing. With solar panel systems that fit on a rooftop and batteries whose prices have fallen by 80 percent in five years, the need for a monumental grid may become obsolete. Places that have never had electricity before are skipping the need for centralized power plants entirely.

Nicole Poindexter runs Energicity, a company in West Africa that installs solar microgrids in rural villages. These are self-sustaining islands of electricity in a sea of energy poverty. Beyond powering LED lights in homes, which can replace expensive kerosene lanterns, Energicity’s microgrids are strong enough to power light industry. Before they electrified the village of Odumasi, Ghana, one family was forced to separate. The mother moved to the city in order to use an electric sewing machine for her seamstress business. It’s one story in a larger narrative of families adapting to a modernizing world. When Black Star Energy, the Ghanian subsidiary of Energicity, electrified her village, she could move her business back home. The family was reunited.

“Electricity doesn’t just power lights and TVs, it transforms people’s lives,” said Nicole. For many in the rural, developing world, microgrids can be a pathway into a new standard of living. Moreover, electricity can save lives. At a nearby health clinic, the microgrid allowed for an ultrasound machine to check for complications in pregnancy. These improvements reduced deaths of mothers during childbirth.

The 15 villages that Nicole’s business helped electrify have done something revolutionary. They’ve leapfrogged the need for a centralized grid based on fossil fuels. They jumped from no electricity to 100-percent clean power. Solar microgrids may become the first source of power for the nearly one billion people who still lack access to electricity.

Even as microgrids declare their independence from the system, that may not be an end in itself. The microgrid can be a pillar to help balance the megagrid. An electrified village that generates its own power may encourage connections to the larger grid by a transmission line. These self-contained systems can help strengthen many developing-world grids prone to outages by producing or storing extra power as needed.

The transition to a grid powered by distributed renewables may be challenging at first. Ultimately, it has the potential to create a better energy system and economy. With decentralized sources of electricity come decentralized benefits. No longer must all services be provided by a monolithic power authority. Everyone who participates has the opportunity to share in the wealth of the system. This way of thinking shatters what many dismissed as impossible. We have an opportunity to create a new symbiotic grid balanced by relationships of mutual benefit between transportation and generation, energy supply and demand, microgrids and megagrids. When put at odds, these forces leave us with additional challenges. When brought together, they form electric harmonies, composed of empowered consumers and communities.