Can the World's Worst Biking City Become the Best? - Shareable
Skip to content

Boston is one of the world’s worst cities for bicycling. I know; I used to live there.

But don’t take my word for it. Bicycling magazine rated Boston worst in the America three times. In 1999–the year I moved away from the city–the International Federation of Bike Messenger Associations (IFBMA) awarded Boston with the first ever "Hall of Shame Award" as the world’s worst city in which to work as a professional bike messenger.

"City of Boston officials have no Bicycle Program, no bicycle coordinator and the Boston Bicycle Advisory Committee stopped meeting last year. Boston is such an auto-dominated city that it’s no wonder that motor vehicle break-ins were cited as the primary crime concern voiced by Boston residents in the 1997 Public Safety Survey," said the press release.

Ouch. But Boston bicyclists never took the state of their streets lying down. Organizations like Bikes Not Bombs and Broadway Bicycle School, where my wife was once a collective member and mechanic, have worked for years to encourage people to ride bikes and build a more shareable transportation infrastructure.

Their activism paid off when in 2007 the city hired MIT grad and former bike racer Nicole Freedman to serve as the city’s very first "bike czar." Thanks to the webzine Inhabitat, this afternoon I participated in a live webinar with Nicole. She presented Boston’s ambitious plans (you can view the powerpoint here) and answered questions from participants. Nicole described a staggering amount of progress:

And much, much more… more than I can list here. The most startling evidence of progress, at least to me: Boston now offers a bikesharing program at eight city buildings where over 5,000 employees work, including City Hall and the Boston Police Headquarters.

This city bike pool is just a precursor to the main event: citywide bikesharing. Boston has hired a Canadian company, the Public Bike System Company, to bring a network of bike-sharing stations to Boston, with plans to expand the system into Cambridge, Somerville, and Brookline.

Freedman’s not stopping there. Surveys in Boston and New York suggest that safety concerns are the number one obstacle to more biking. In response, Boston has been reengineering its roadways, developing, marking, and painting bikelanes–and the next step, said Freedman, will be add at least ten more miles of lanes and widen them as much as possible. Ultimately, Freedman hopes Boston will have protected lanes where bikes are not adjacent to cars. 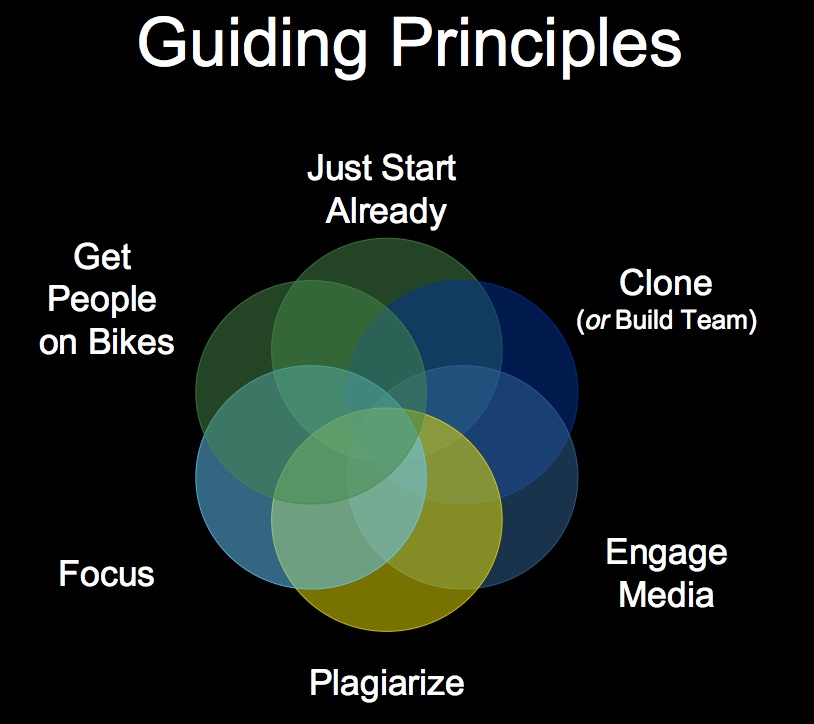 Nicole’s advice for people who want to bring bikesharing to their towns and cities? “Do a lot of research," she says. "Learn if your city is already looking at it. City government has to be involved; it has to be a public-private partnership, because no bike sharing program can work without using public space. Anyone good in government is listening to the public; we’re hired by the public, and hearing people’s requests is one of the best ways to hear what’s good."

The next steps? Organize any way you can to get people on bikes, recruit activists and leaders, focus on developing specific programs (e.g., educating people about safety), engage the media–and, most important, steal best practices from other cities. Who knows? Someday cities might be looking to Boston for ideas.