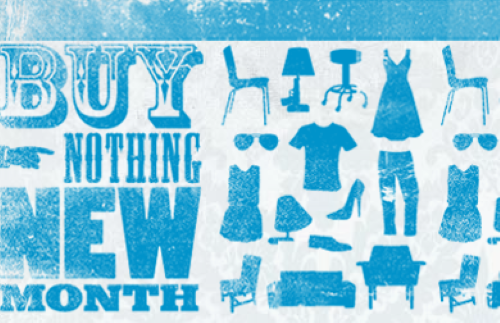 Buy Nothing New Month is a campaign to get people thinking differently about consumption and the lifespan of stuff. It's an idea that started in Melbourne Australia and is spreading to the Netherlands and USA. In this interview founder Tamara Dimattina explains what motivated her to start the project and how we can maximise the life of stuff by keeping it in circulation.

Shareable: What is Buy Nothing New Month?

Tamara Dimattina: Buy Nothing New Month (BNNM) is a global campaign for conscientious consumption that encourages people to give up unnecessary shopping and wasteful consumption. It’s not Buy Nothing Month, people obviously need to buy essentials like food, medical and hygiene products, but we’re really trying to get people to re-assess how, what and why they buy and look at alternatives that might be better for people and the planet.

Throughout the month of October people can take the pledge and we really encourage people to ask themselves a bunch of questions like “Do I really need this thing?” We’re not saying to people don’t buy deodorant, it’s not about going without something, it’s looking at how can we fulfil that need by extending the life of existing goods.

We heavily promote the second-hand economy and one of our fabulous partners the Brotherhood of St Laurence have a range of great second-hand charity stores that sell everything from kids toys to clothing to home wares and even refrigerators. When you shop at second-hand stores you support the community, extend the life of existing stuff and save it from landfill, so it’s a win-win-win.

What motivated you to start BNNM?

I wanted to have an impact on people being more resourceful and more respectful of our finite resources and I think BNNM really came out of that. I’d always been really confused about where does our stuff come from and where does it go? I had a few “ah-ha” moments including when I visited Dharavi slum in Mumbai and you get to see where a lot waste from western countries goes to get recycled and you see people working in really terrible working conditions and it just makes you think about the lifespan of our stuff and where it goes. Then I went to Antarctica with a group to learn about sustainability and I came back to do a fellowship at the Centre for Sustainability Leadership.

All of those experiences made me keener to do something about what I saw as a massive issue and I didn’t really see there were any campaigns out there to really get us to think about our consumption. Every day we get bombarded with advertising messages non-stop and you can’t avoid it even if you try. Even if you don’t watch commercial television, everywhere you go there’s something saying buy this or buy that. Then we thought let’s start normalising the way a whole lot of people are already living but that lifestyle doesn’t have enough of a voice out there yet.

It’s really been amazing to see the stories coming out from everywhere from people who’ve done BNNM and had a life-changing transformation through it. We hear great stories from people who are starting up their own sharing businesses as a result of BNNM because it’s really opened their eyes to seeing our stuff differently and seeing the value in our existing stuff and how we can maximise it.

I spoke to someone recently who’s just about to launch their own caravan-sharing business called Caramavan. I also talk to a bunch of people who have now started organising swap meets with their friends and all these different ways of sharing resources, which not only keeps that stuff circulating and not going to landfill, it’s also really helping to build those community connections which can get lost sometimes in our crazy interweb connected lives.

Take the pledge and get a group of your mates together and bring along items of clothing that you don’t use anymore and swap that stuff around. It’s also a great opportunity to engage with your friends about these issues.

We have Mother’s groups who get together and swap around kids clothing. Someone organised a big sale in their local town hall and everyone brought along all their unwanted stuff. Other people just use BNNM to buy second hand items of clothing.

If you stay in a hotel you’re sleeping in second-hand sheets that someone else has slept in before and there’s nothing wrong with that. BNNM is just extending that out into other areas like your wardrobe.

Anything special happening this year to celebrate?

This year the Australian Conservation Foundation (ACF) are launching a new platform called Flikkit and they’re having a BNNM "green spring clean" sale. You can sell your unwanted stuff and the proceeds of the sale are donated to ACF.

The seller gets a tax-deductible receipt (in Australia) so you can trade in your unwanted stuff for some tax rebates. It makes mini-philanthropists of all of us and creates an opportunity to de-clutter, do some good and get something back.