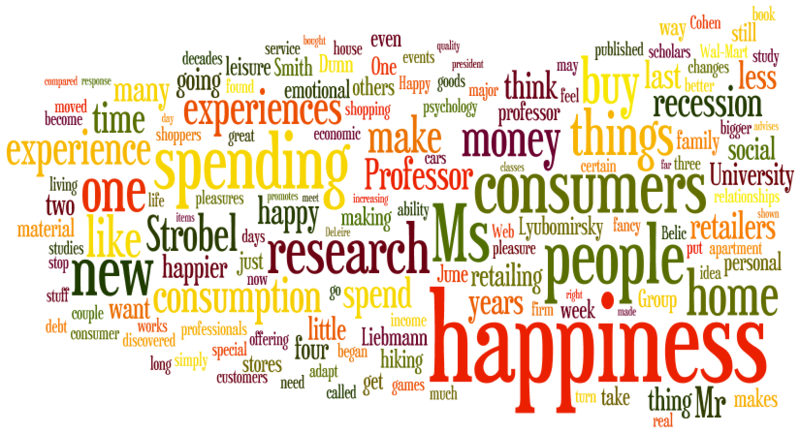 This article, But Will It Make You Happy?, has been making the rounds today. In fact, it's currently the most popular article on NYTimes.com. We all know that buying more junk doesn't make us happy. We already know in our hearts what the science proves in this article. Not one among us would argue that our most important, memorable life experiences are born in consumption. In fact, many have been arguing recently that consumption is a distraction to what matters most in life. Could it be that the sluggish economy is just what we needed to refocus our priorities on what makes us really happy?

Amid weak job and housing markets, consumers are saving more and spending less than they have in decades, and industry professionals expect that trend to continue. Consumers saved 6.4 percent of their after-tax income in June, according to a new government report. Before the recession, the rate was 1 to 2 percent for many years. In June, consumer spending and personal incomes were essentially flat compared with May, suggesting that the American economy, as dependent as it is on shoppers opening their wallets and purses, isn't likely to rebound anytime soon. On the bright side, the practices that consumers have adopted in response to the economic crisis ultimately could – as a raft of new research suggests – make them happier. New studies of consumption and happiness show, for instance, that people are happier when they spend money on experiences instead of material objects, when they relish what they plan to buy long before they buy it, and when they stop trying to outdo the Joneses.

In the article, Marshal Cohen, from the research firm NPD Group says, "We're moving from a conspicuous consumption – which is 'buy without regard' – to a calculated consumption." Rachel Botsman and Roo Rogers argue that we are shifting to a model of Collaborative Consumption. Whatever the term, the plain truth is that whether by necessity or choice, many of us are setting our sights on a simplified life. We are seeking happiness in relationships and experiences as as opposed to the accumulation of more shiny objects. NeighborGoods, Zipcar, AirBnB and all the other services that are a part of the new sharing economy are proof of this shift and give us the opportunity to borrow and share material goods instead of purchasing and owning them. The New York Times article closes with a bit of advice: "Give away some of your stuff. See how it feels." I encourage you to also lend some of your stuff and borrow something you need from a neighbor. See how that feels.