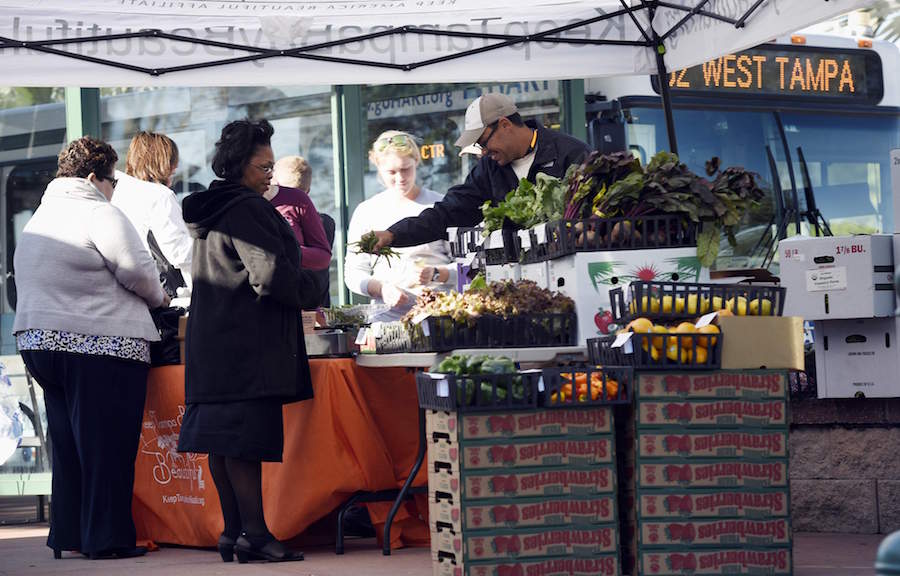 For some people, getting fresh produce is as easy as walking to the nearby corner market. For those who live in food deserts, however, getting fresh food may mean multiple bus rides, long walks, and dragging heavy grocery bags across town. It's no wonder that people in food deserts—defined by the Healthy Food Financing Initiative as a “low-income census tract where a substantial number or share of residents has low access to a supermarket or large grocery store”— are more likely to grab a hot dog or chips from the corner convenience store than trek to a supermarket across town.

In the last few years, numerous projects to bring fresh food into food deserts have been created. Some of the more exciting ones include New York City’s Green Carts, local food coops, and grassroots food delivery and education projects. Now, bus stop farmers markets are emerging as a way to conveniently get fresh food to those living in food deserts. As Modern Farmer recently reported,

“[M]obile farm stands—on decommissioned city buses, converted delivery vehicles, and even pedal-powered models—have proliferated over the last five years as a way to make farm fresh goods available, typically at discounted prices, in low-income neighborhoods. And in the past eight months, several cities around the US have piggybacked on that idea by establishing tiny, pop-up style farmers markets at bus stops and transit stations, so folks can grab the makings of a wholesome dinner as they make their way home from work each day.”

The idea is fairly simple: make fresh produce easy to access by putting it where people already are: transit stops. Modern Farmer mentioned several bus stop farmers markets that empower residents to forgo convenience stores for home cooked meals made with fresh produce. The projects include:

The Market at Wright Stop Plaza in Dayton, Ohio – The Market is a farm stand at Dayton’s main transit center that employs local homeless and serves transit riders. It’s a partnership between the county government and Homefull, a local homeless services organization.

Netpark Transfer Center Farmer’s Market in Tampa, Florida – This market is a one day per month pilot program that provides fresh fruits and vegetables at the transit transfer center, as well as information on how to prepare the produce and tips for growing food at home.

Fresh MARTA Market in Atlanta, Georgia – Fresh MARTA is located at a subway stop in Atlanta’s West End neighborhood where almost 50 percent of residents live below the poverty line. The one day per week market offers fresh produce, two-for-one SNAP purchases, cooking demos, a weekly bike tour of nearby urban farms, and free consultation about food assistance programs. If this pilot goes well, the plan is to open a farmers market at each of MARTA’s 37 stations.